David Nutt
This article is about the neuropsychopharmacologist. For the publisher, see David Nutt (publisher).

David John Nutt (born 16 April 1951) is a British psychiatrist and neuropsychopharmacologist specialising in the research of drugs that affect the brain and conditions such as addiction, anxiety and sleep.[1] He was until 2009 a professor at the University of Bristol heading their Psychopharmacology Unit.[2] but since then he has been the Edmond J Safra chair in Neuropsychopharmacology at Imperial College, London.[3] Nutt was a member of the Committee on Safety of Medicines, and was President of the European College of Neuropsychopharmacology.[4]

Nutt completed his secondary education at Bristol Grammar School and then studied medicine at Downing College, Cambridge, graduating in 1972. In 1975, he completed his clinical training at Guy's Hospital.[5]

He worked as a clinical scientist at the Radcliffe Infirmary from 1978 to 1982. From 1983 to 1985, he lectured in psychiatry at the University of Oxford. In 1986, he was the Fogarty visiting scientist at the National Institute on Alcohol Abuse and Alcoholism in Bethesda, MD, just outside of Washington, D.C. Returning to the UK in 1988, he joined the University of Bristol as director of the Psychopharmacology Unit. In 2009, he then established the Department of Neuropsychopharmacology and Molecular Imaging at Imperial College, London, taking a new chair endowed by the Edmond J Safra Philanthropic Foundation.[5] He is an editor of the Journal of Psychopharmacology.[6]

His current research focuses on brain circuits and receptors in anxiety and addiction, and on the pharmacology of sleep. This involves the study of GABA receptors, using labelled subtypes of GABA 5, and serotonin, or 5-HT, receptors. Type 1 5-HT receptors seem to be especially important in depression and the action of anti-depressants.[2]

In 2007 Nutt published a controversial study on the harms of drug use in The Lancet.[7] Eventually, this led to his sacking from his position in the ACMD; see government positions below. Subsequently, Nutt and a number of his colleagues who had subsequently resigned from the ACMD founded the Independent Scientific Committee on Drugs.[8]

In November 2010, Nutt published another study in The Lancet, co-authored with Les King and Lawrence Phillips on behalf of this independent Committee. This ranked the harm done to user and society by a range of drugs.[9] Owing in part to criticism over the arbitrary weighting of the factors in the 2007 study,[8][10] the new study employed a multi-criteria decision analysis procedure and found that alcohol is more harmful to society than both heroin and crack, while heroin, crack and methylamphetamine (crystal meth) were the most harmful drugs to individuals.[9] Nutt has also written about this topic in newspapers for the general public,[11] sometimes leading to public disagreements with other researchers.[12]

Professor Nutt worked as an advisor to the Ministry of Defence, Department of Health and the Home Office.[5]

He served on the Committee on Safety of Medicines where he participated in an enquiry into the use of SSRI anti-depressants in 2003. His participation was criticised as, owing to his financial interest in GlaxoSmithKline, he had to withdraw from discussions of the drug Seroxat.[13] In January 2008 he was appointed as the chairman of the Advisory Council on the Misuse of Drugs (ACMD), having previously been Chair of the Technical Committee of the ACMD for seven years.[1] 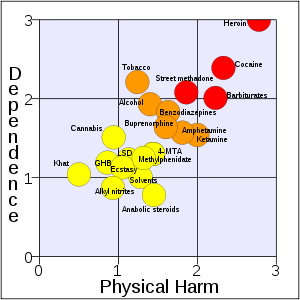 A figure using data from a paper in the journal, The Lancet ranking the relative negative effects of different drugs. The paper was written by Nutt and included in his controversial lecture[7][14]

As ACMD chairman Nutt repeatedly clashed with government ministers over issues of drug harm and classification. In January 2009 he published in the Journal of Psychopharmacology an editorial ('Equasy – An overlooked addiction with implications for the current debate on drug harms') in which the risks associated with horse riding (1 serious adverse event every ~350 exposures) were compared to those of taking ecstasy (1 serious adverse event every ~10,000 exposures).[15] In February 2009 he was criticised by Home Secretary Jacqui Smith for stating in the paper that the drug ecstasy – a class A drug along with heroin and cocaine – was statistically no more dangerous than an addiction to horse-riding.[16] Speaking to the Daily Telegraph, Nutt said that the point was "to get people to understand that drug harm can be equal to harms in other parts of life". Jacqui Smith claimed to be "surprised and profoundly disappointed" by the remarks, and added: "I'm sure most people would simply not accept the link that he makes up in his article between horse riding and illegal drug taking". She also insisted that he apologise for his comments, and asked him to apologise also to 'the families of the victims of ecstasy'.[17]

The issue of the mismatch between lawmakers' classification of recreational drugs, in particular that of cannabis, and scientific measures of their harmfulness surfaced again in October 2009, after the publication of a pamphlet[18] containing a lecture Nutt had given to the Centre for Crime and Justice Studies at King's College London in July 2009. In this, Nutt repeated his familiar view that illicit drugs should be classified according to the actual evidence of the harm they cause, and presented an analysis in which nine 'parameters of harm' (grouped as 'physical harm', 'dependence', 'and 'social harms') revealed alcohol and tobacco to be more harmful than LSD, ecstasy and cannabis. In this ranking, alcohol came fifth behind heroin, cocaine, barbiturates and methadone, and tobacco ranked ninth, ahead of cannabis, LSD and ecstasy, he said. In this classification, alcohol and tobacco appeared as Class B drugs, and cannabis was placed at the top of Class C. Nutt also argued that taking cannabis created only a "relatively small risk" of psychotic illness,[19] and that " "the obscenity of hunting down low-level cannabis users to protect them is beyond absurd".[20] Nutt objected to the recent re-upgrading (after 5 years) of cannabis from a Class C drug back to a Class B drug (and thus again on a par with amphetamines), considering it politically motivated rather than scientifically justified.[14] In October 2009 Nutt had a public disagreement with psychiatrist Robin Murray in the pages of The Guardian about the dangers of cannabis in triggering psychosis.[12]

Following the release of this pamphlet, Nutt was dismissed from his ACMD position by the Home Secretary, Alan Johnson. Explaining his sacking of Nutt, Alan Johnson wrote in a letter to The Guardian, that "He was asked to go because he cannot be both a government adviser and a campaigner against government policy. [...] As for his comments about horse riding being more dangerous than ecstasy, which you quote with such reverence, it is of course a political rather than a scientific point."[21] Responding in The Times, Professor Nutt said: "I gave a lecture on the assessment of drug harms and how these relate to the legislation controlling drugs. According to Alan Johnson, the Home Secretary, some contents of this lecture meant I had crossed the line from science to policy and so he sacked me. I do not know which comments were beyond the line or, indeed, where the line was [...]"[22]

In the wake of Nutt's dismissal, Dr Les King, a part-time advisor to the Department of Health, and the senior chemist on the ACMD, resigned from the body.[23] His resignation was soon followed by that of Marion Walker, Clinical Director of Berkshire Healthcare NHS Foundation Trust's substance misuse service, and the Royal Pharmaceutical Society's representative on the ACMD.[24]

The Guardian revealed that Alan Johnson ordered what was described as a 'snap review' of the 40-strong ACMD in October 2009. This, it was said, would assess whether the body is "discharging the functions" that it was set up to deliver and decide if it still represented value for money for the public. The review is to be conducted by David Omand.[25] Within hours of that announcement, an article was published online by The Times arguing that Nutt's controversial lecture actually conformed to government guidelines throughout.[26] This issue was further publicised a week later when Liberal Democrat science spokesman Dr Evan Harris, MP, attacked the Home Secretary for apparently having misled Parliament and the country in his original statement about Nutt's sacking.[27]

John Beddington, the Chief Scientific Adviser to the UK Government stated that he agreed with the views of Professor Nutt on cannabis. When asked if he agreed whether cannabis was less harmful than cigarettes and alcohol, he replied: "I think the scientific evidence is absolutely clear cut. I would agree with it."[28] A few days later, it was revealed that a leaked email from the government's Science Minister Lord Drayson was quoted as saying Mr Johnson's decision to sack Nutt without consulting him was a "big mistake" that left him "pretty appalled".[29]

On 4 November, the BBC reported that Nutt had financial backing to create a new independent drug research body if the ACMD was disbanded or proved incapable of functioning.[30] This new body, The Independent Scientific Committee on Drugs, was launched in January 2010. On 11 November, after a meeting between ACMD and Alan Johnson, three other scientists tendered their resignations, Dr Simon Campbell, a chemist, psychologist Dr John Marsden and scientific consultant Ian Ragan.[31]

In an 11 November 2009 editorial in The Lancet, Nutt explicitly attributed his sacking to a conflict between government and science, and reiterated that "I have repeatedly stated [cannabis] is not safe, but that the idea that you can reduce use through raising the classification in the Misuse of Drugs Act from class C to class B—where it had previously been placed, but thus now increasing the maximum penalty for possession for personal use to 5 years in prison—is implausible."[32] In a rejoinder, William Cullerne Bown of Research Fortnight pointed out that the framing of science vs. government was misleading because the weighting of the factors in Nutt's 2007 Lancet paper was arbitrary, and consequently that there was no scientific answer to ranking drugs.[33] In reply, Nutt admitted the limitations of the original study, and wrote that ACMD was in the process of devising a multicriteria decision-making approach when he was sacked. Nutt reiterated that "The repeated claims by Gordon Brown's government that it had scientific evidence that trumped that of the ACMD and the acknowledgment that it was only interested in scientific evidence that supported its political aims was a cynical misuse of scientific evidence that breached the principles of the 1971 Act and was insulting to Council." Nutt announced that he and number of colleagues that had resigned from the ACMD had set up an Independent Scientific Committee on Drugs.[8]

A subsequent review of policy drafted by Lord Drayson[8] essentially reaffirmed that the scientific advisers to the government can be dismissed under similar circumstances: "Government and its scientific advisers should not act to undermine mutual trust."[34] This clause was kept despite protest from Sense About Science, Campaign for Science and Engineering, and liberal-democrat MP Evan Harris; according to Lord Drayson, the clause was requested by John Beddington, the Chief Scientific Adviser to the UK Government.[35] Les Iversen was announced as the successor of Nutt as the chair of the ACMD in January 2010.[36]