David Lauren (born October 1971) is the younger son of clothing designer, Ralph Lauren. His mother is Ricky Lauren and his siblings are Dylan and Andrew Lauren.[1]

David Lauren was born in 1971 to American fashion designer and executive Ralph Lauren and wife Ricky Lauren. The second of three children, Lauren has an older brother, Andrew Lauren, and a younger sister, Dylan Lauren. Lauren attended Duke University, where he studied Political Science.[2] At Duke, he founded Swing, a general interest lifetstyle publication for Generation X, where he served as President and Editor-In-Chief. Swing was eventually published by international conglomerate Hachette Filipacchi Médias, the world's largest magazine publisher.[2][3]

Lauren is currently Senior Vice President, Advertising, Marketing and Corporate Communications at Polo Ralph Lauren, a position he has held since October 2001.[4] In his role at Polo Ralph Lauren, Lauren is responsible for the global advertising and marketing campaigns for the company for 28 brands, overseeing over 200 advertising campaigns a year, as well as the company's corporate and fashion communications and strategic marketing partnerships.[5]

Lauren joined Polo Ralph Lauren in 2000 to run the company's internet operations with Ralph Lauren Media, LLC., where he launched the Ralph Lauren website under an idea he called "merchan-tainment," or the combination of merchandising and entertainment.[3][4]

In his time at Polo Ralph Lauren, Lauren has played a role in many key initiatives, including the establishment of RalphLauren.com, the launch of the Rugby brand, and Polo Ralph Lauren's entry into mobile applications.[6][4] Lauren has also orchestrated the company's sponsorship of several international sporting events and teams, including Wimbledon, the U.S. Open, and the U.S. Olympic teams.[3][7] In 2007, he was named DNR's "Marketer of the Year." [5] 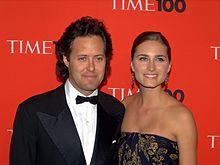 Lauren serves as President of the Polo Ralph Lauren Foundation, with which he participates in numerous charitable organizations, including the Pink Pony fund, the Ralph Lauren Center for Cancer Care and Prevention, the Polo Jeans G.I.V.E. program, and the Star-Spangled Banner Preservation Project at the Smithsonian National Museum of American History.[8][9] As of September 4, 2011 David Lauren is married to Lauren Bush Lauren, granddaughter of President George H.W. Bush.[10][11]