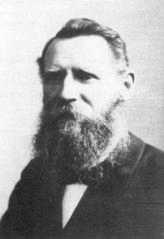 He was born in , and died in . He was a student of . He worked on , and . His main work was the "Lehrbuch der Kristallphysik" (textbook on crystal physics), first published in 1910. He discovered the in 1898. The word in its current meaning was introduced by him in 1899. and are named after him. He was also an amateur musician and became known as a Bach expert (see External links).

In 1887 Voigt [Voigt (1887a), primary sources] formulated a form of the between a rest frame of reference and a frame moving with speed in the direction. However, as Voigt himself declared the transformation was aimed for a specific problem and did not carry with it the ideas of a general coordinate transformation, as is the case in .

*Citation | author=Voigt, W. | year=1887b | journal=Göttinger Nachrichten | title= [http://gdz.sub.uni-goettingen.de/no_cache/dms/load/img/?IDDOC=55436 Theorie des Lichts für bewegte Medien] |pages= 177-238 |issue=8 ; This article ends with the announcement that in a forthcoming article the principles worked out so far shall be applied to the problems of reflection and refraction. The article contains on p. 235, last paragraph, and on p. 236, 2nd paragraph, a judgment on the Michelson experiment of 1886, which Voigt, after a correspondence with H. A. Lorentz in 1887 and 1888, has partly withdrawn in the article announced, namely in a footnote in Voigt (1888). According to Voigt's first judgment, the Michelson experiment must yield a null result, independently of whether the Earth transports the luminiferous aether with it (Fizeau's 1st aether hypothesis), or whether the Earth moves through an entirely independent, self-consistent universal luminiferous aether (Fizeau's 2nd aether hypothesis).