Classics Illustrated is a comic book series featuring adaptations of literary classics such as Moby Dick, Hamlet, and The Iliad. Created by Albert Kanter, the series began publication in 1941 and finished its first run in 1971, producing 169 issues. Following the series' demise, various companies reprinted its titles. This series is different from the Great Illustrated Classics, which is an adaptation of the classics for young readers that includes illustrations, but is not in the comic book form. 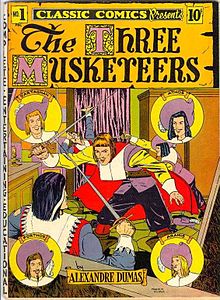 Russian-born publisher Albert Lewis Kanter (1897–1973) created Classic Comics for Elliot Publishing Company in 1941 with its debut issues being The Three Musketeers, followed by Ivanhoe and The Count of Monte Cristo. In addition to the literary adaptations, books featured author profiles, educational fillers, and an ad for the coming title. In later editions, a catalog of titles and a subscription order form appeared on back covers. Albert Lewis Kanter [1] recognizing the appeal of early comic books, believed he could use the new medium to introduce young and reluctant readers to "great literature".

With the fourth issue, The Last of the Mohicans, in 1942, Kanter moved the operation to different offices and the corporate identity was changed to the Gilberton Company, Inc.. Reprints of previous titles began in 1943. Wartime paper shortages forced Kanter to reduce the 64-page format to 56 pages.

Classic Comics is marked by varying quality in art and is celebrated today for its often garish but highly collectible line-drawn covers. Artists include Lillian Chesney (Arabian Nights, issue 8, and Gulliver's Travels, issue 16), Webb and Brewster (Frankenstein, issue 26), Matt Baker (Lorna Doone, issue 32), and Henry Carl Kiefer (second cover for The Prince and the Pauper, issue 29, cover for The Adventures of Sherlock Holmes, issue 33, and the first Classics Illustrated issue The Last Days of Pompeii, issue 35). Oliver Twist (issue 23) was the first title produced by the Eisner & Iger shop.

Some titles were packaged in gift boxes of threes or fours during the period with specific themes such as adventure or mystery. Dr. Jekyll and Mr. Hyde (issue 13) and Uncle Tom's Cabin (issue 15) were both cited in Dr. Fredric Wertham's infamous 1954 condemnation of comic books Seduction of the Innocent. Original edition Classic Comics in Near Mint condition command prices in the thousands of dollars.

The series name-changed in March 1947 to Classics Illustrated with issue 35 The Last Days of Pompeii. In 1948, rising paper costs reduced books to 48 pages. In 1951, line-drawn covers were replaced with painted covers (issue 81), and the price was raised from 10 cents to 15 cents, (and, at a later date, to 25 cents). In addition to Classics Illustrated, Kanter presided over its spin-offs Classics Illustrated Junior (1953), Specials, and The World Around Us. Between 1941 and 1962, sales totaled 200 million.

The publication of new titles ceased in 1962 for various reasons. The company lost its 2nd-class mailing permit and cheap paperbacks, Cliff's Notes, and television drew readers away from the series. Kanter's last new title was issue 167 Faust (August 1962) though other titles had been planned. These titles appeared in the company's foreign editions. In 1967, Kanter sold his company to Catholic publication Twin Circle and its publisher Patrick Frawley, whose Frawley Corporation brought out two more titles but mainly concentrated on foreign sales and reprinting older titles. After four years, Twin Circle discontinued the line because of poor distribution. Since the series' demise, various companies have reprinted its titles. By the early 1970s, Classics Illustrated and Junior had been discontinued, although the Classics Illustrated branding would be used on a series of telemovies produced by Schick Sunn Classics: 1977's Last of the Mohicans; 1978's Donner Pass: The Road to Survival, The Time Machine and The Deerslayer; 1980's The Legend of Sleepy Hollow and 1981's Adventures of Huckleberry Finn and Adventures of Nellie Bly (source: http://ftvdb.bfi.org.uk/sift/series/41527 and other sources for Sleepy Hollow).

A title from Classics Illustrated Junior

In 1953, Classics Illustrated Junior debuted with Snow White and the Seven Dwarfs. The line eventually numbered 77 fairy and folk tale, myth and legend titles, ending publication in 1971. Issues included miscellanea such as an Aesop fable and a full-page illustration to color with crayons. Artists included John Costanza and Kurt Schaffenberger.

See also: the Subsequent developments section below for the re-issues published from 2008 in the UK

Of the 162 British titles, 13 never appeared in America. Additionally, there were some variations in cover art. UK issues never published in the United States include Aeneid, The Argonauts, The Gorilla Hunters and Sail with the Devil. The British Classics Illustrated adaptation of Dr. No was never published under the U.S. Classics Illustrated line, but instead was sold to DC Comics which published it as part of their superhero anthology series, Showcase. The comic followed the plot of the film with images of the film's actors rather than Ian Fleming's original novel.

In Greece the series is named Κλασσικά Εικονογραφημένα (Klassiká Eikonografiména, meaning Classics Illustrated) and is being published continuously since 1951 by Εκδόσεις Πεχλιβανίδη (Ekdóseis Pechlivanídes, Pechlivanídes Publications). It is based on the American series, with the difference that well-known Greek illustrators and novelists work to adapt stories of particular Greek interest. Κλασσικά Εικονογραφημένα are read by thousands of young Greeks, and the first issues are of interest to collectors.

The Pechlivanídes brothers had inherited the printing press of Bavarian lithographer Grundman — and his experience as well. Having worked for years with offset printing, the Pechlivanídes brothers, already well-known in the publications field, founded after the war[clarification needed] the Εκδόσεις Ατλαντίς (Atlantis Publications) house in order to restart publishing children's books. They had read Classics Illustrated while traveling in the US, and arranged to publish them in Greece as well.

The first issue of Κλασσικά Εικονογραφημένα was made available on 1 March 1951. It was an adaptation of Victor Hugo's Les Misérables, and attracted extensive critique in Greece, both positive and negative. It was the first "American" kind of comic in Greece and also the first four-color or tetrachromous offset (with 336 multicoloured illustrations as the front page advertised). Its cost at the time was 4,000 Drachmas, and the first edition (90,000 copies) went out of print quickly and was reprinted twice in the following days. (According to Ατλαντίδα/Atlantídha/Atlantis, it sold about a million copies).

In 1990, First Comics partnered with Berkeley Publishing to acquire the rights and Classics Illustrated returned with new adaptations and a line-up of artists that included Kyle Baker, Dean Motter, Mike Ploog, P. Craig Russell, Bill Sienkiewicz, Joe Staton, Rick Geary and Gahan Wilson.[2][3] However, the line lasted only a little over a year.

In 1997–1998, Acclaim Books, the successor to Valiant Comics, published a series of recolored reprints in a digest size format with accompanying study notes by literary scholars. The Acclaim line included Mark Twain's Adventures of Huckleberry Finn, with art by Frank Giacoia, and The Three Musketeers, illustrated by George Evans. The series favored Mark Twain with reprints of Pudd'nhead Wilson, The Prince and the Pauper and Tom Sawyer. Other reprints in this series were Fyodor Dostoyevsky's Crime and Punishment, Herman Melville's Moby-Dick and Nathaniel Hawthorne's The House of the Seven Gables.

In 2007, it was announced that Papercutz acquired the license and would begin publishing graphic novels starting with The Wind in the Willows. They will be combining reprints of some of the original titles with new modern adaptations, largely produced in France, the first of which will be The Adventures of Tom Sawyer, with art by Severine Lefebvre. In November 2007, Jack Lake Productions Inc., published for the first time in North America #170 The Aeneid (originally published in the UK) along with #1 The Three Musketeers, #4 The Last of the Mohicans and #5 Moby Dick.

In September 2008, Classic Comic Store Ltd., based in the U.K., began publishing both the original Gilberton Classics Illustrated regular and Junior lines for distribution in the U.K., Republic of Ireland, South Africa, Australia and New Zealand. The issue number sequence is different to the original runs, although the Junior series was in the same sequence as the original, but with numbering starting at 1 instead of 501. The covers were digitally 'cleaned up' and enhanced, based on the original US covers. In September 2009, Classic Comic Store Ltd announced that although they would continue to publish the Classics Illustrated titles, they were no longer publishing the Junior series after issue 12, but rather importing the issues from Canada. This meant that the numbers used would be as per the Canadian issues (i.e. the first one imported would be issue 513).

In July 2011, Nicholas Nickleby (issue 32 of the new run) became the first new title in the 48-page series since the 1969 publication of No. 169 (Negro Americans: The Early Years). The artwork came from the November 1950 Stories by Famous Authors Illustrated edition of Nicholas Nickleby and retained the original Gustav Schrotter interior art.[4]

The authorship is based on the information held by Michigan State University Libraries, Special Collections Division in their Reading Room Index to the Comic Art Collection[5][6]

The authorship is based on the information held by Michigan State University Libraries, Special Collections Division in their Reading Room Index to the Comic Art Collection.[5][6]

The titles and publication dates are obtained from a personal collection.[7]