Diospyros lotus, better known as the Date-plum or Caucasian Persimmon is a widely cultivated species of the genus Diospyros, native to subtropical southwest Asia and southeast Europe. Its English name derives from the small fruit, which have a taste reminiscent of both plums and dates. It is among the oldest plants in cultivation.

The species area extends from East Asia to the west of the Mediterranean, down to Spain. The Date-plum is native to southwest Asia and southeast Europe. It was known to the ancient Greeks as "the fruit of the gods" i.e. Dios pyros (lit. "the wheat of Zeus"), hence the scientific name of the genus. Its English name probably derives from Persian Khormaloo خرمالو literally "Date-Plum", referring to the taste of this fruit which is reminiscent of both plums and dates. This species is one candidate for the "lotus tree" mentioned in The Odyssey: it was so delicious that those who ate it forgot about returning home and wanted to stay and eat lotus with the lotus-eaters.[1]

The tree grows in the lower and middle mountain zones, the Caucasus, usually up to 600 m above sea level. In Central Asia, it rises higher - up to 2000 m. The net stands Rarely forms, usually grows with the frame, ash, maple and other deciduous species. It is not demanding on the soil, can grow on rocky slopes, but requires high light, so well cleaned of twigs, which makes its stately columned trunks look.

It is cultivated at the limits of its range, as well as in the U.S. and North Africa. 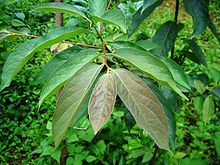 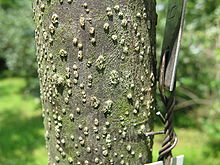 This is a tree height of 15-30 m with sloughing of aging bark.

The leaves are shiny, leathery, oval shape with pointed ends, 5-15 cm long and 3-6 cm in width.

The flowers are small, greenish, appearing in the June-July.

Fruits are berries with juicy flesh, yellow when ripe, 1-2 cm in diameter. Seeds with thin skin and a very hard endosperm.

Caucasian persimmon fruits are edible and contain lots of sugars, malic acid, and vitamins. They are used as fresh fruits or after frost, but usually dried. Drying and frost destroy their tartness.