Industrial process data validation and reconciliation or short data validation and reconciliation (DVR) is a technology which is using process information and mathematical methods in order to automatically correct measurements in industrial processes. The use of DVR allows for extracting accurate and reliable information about the state of industry processes from raw measurement data and produces a single consistent set of data representing the most likely process operation.

Models can have different levels of detail, for example one can incorporate simple mass or compound conservation balances, or more advanced thermodynamic models including energy conservation laws. Mathematically the model can be expressed by a nonlinear system of equations

, which incorporates all the above-mentioned system constraints (for example the mass or heat balances around a unit). A variable could be the temperature or the pressure at a certain place in the plant.

is not a solution of the nonlinear system

. When using measurements without correction to generate plant balances, it is common to have incoherencies. Measurement errors can be categorized into two basic types:

Random errors means that the measurement

is a normally distributed random variable with mean

is the true value that is typically not known. A systematic error on the other hand is characterized by a measurement

which is a normally distributed random variable with mean

, which is not equal to the true value

Other sources of error when calculating plant balances, are small instabilities in plant operations. Not all measurements and samples are taken at the same time, causing discrepancies between measurements. Using time averages for plant data partly reduces this problem but lab analyses cannot be averaged.

ISA-95 is the international standard for the integration of enterprise and control systems [1]. It asserts that:

Data reconciliation is a serious issue for enterprise-control integration. The data have to be valid to be useful for the enterprise system. The data must often be determined from physical measurements that have associated error factors. This must usually be converted into exact values for the enterprise system. This conversion may require manual, or intelligent reconciliation of the converted values [...]. Systems must be set up to ensure that accurate data are sent to production and from production. Inadvertent operator or clerical errors may result in too much production, too little production, the wrong production, incorrect inventory, or missing inventory.

DVR has become more and more important due to industrial processes that are becoming more and more complex. DVR started in the early 1960s with applications aiming at closing material balances in production processes where raw measurements were available for all variables [2]. At the same time the problem of gross error identification and elimination has been presented [3]. In the late 1960s and 1970s unmeasured variables were taken into account in the data reconciliation process [4],[5]. During the 1980s the area of DVR became more mature by considering general nonlinear equation systems coming from thermodynamic models[6],[7]. In 1992 Liebman et al. introduced the concept of dynamic DVR[8].

Given n measurements yi, data reconciliation can mathematically be expressed as an optimization problem of the following form:

is the reconciled value of the i-th measurement (

is the measured value of the i-th measurement (

is the j-th unmeasured variable (

is the standard deviation of the i-th measurement (

are the bounds on the measured and unmeasured variables.

is called the penalty of measurement i. The objective function is the sum of the penalties, which will be denoted in the following by

In other words, one wants to minimize the overall correction (measured in the least squares term) that is needed in order to satisfy the system constraints. Additionally, each least squares term is weighted by the standard deviation of the corresponding measurement.

Data reconciliation is strongly relying on the concept of redundancy. Redundancy is a source of information that is used to correct the measurements as little as possible in order to satisfy the process constraints. Redundancy can be due to sensor redundancy, where sensors are duplicated in order to have more than one measurement of the same quantity. Redundancy can also arise from topological redundancy, where a single variable can be estimated in several independent ways, from separate sets of measurements./ Topological redundancy is intimately linked with the degree of freedom (

) of a mathematical system [9], i.e. the minimum number of pieces of information (i.e. measurements) that are required in order to calculate all of the system variables. For instance, in the example above the flow conservation requires that

, and it is clear that one needs to know the value of two of the 3 variables in order to calculate the third one. Therefore the degree of freedom in that case is equal to 2.

When speaking about topological redundancy we have to distinguish between measured and unmeasured variables. In the following let us denote by

the unmeasured variables and

the measured variables. Then the system of the process constraints becomes

, which is a nonlinear system in

is calculable with the

measurements given, then the level of topological redundancy is defined as

, i.e. the number of additional measurements that are at hand on top of those measurements which are required in order to just calculate the system. Another way of viewing the level of redundancy is to use the definition of

i.e. the redundancy is the difference between the number of equations

and the number of unmeasured variables

is not calculable, even though

, as illustrated in the following example.

Let us consider a small system with 4 streams and 2 units. We incorporate only flow conservation constraints and obtain

. If we have measurements for

, then the system cannot be calculated (knowing

does not give information about

are known, but not

, then the system can be calculated.

and increase their accuracy and precision: on the one hand they reconciled Further, the data reconciliation problem presented above also includes unmeasured variables

Data validation denotes all validation and verification actions before and after the reconciliation step.

Result validation may include statistical tests to validate the reliability of the reconciled values, by checking whether gross errors exist in the set of measured values. These tests can be for example

with a given percentile

of the probability density function of a chi-square distribution (e.g. the 95th percentile for a 95% confidence) gives an indication of whether a gross error exists: If 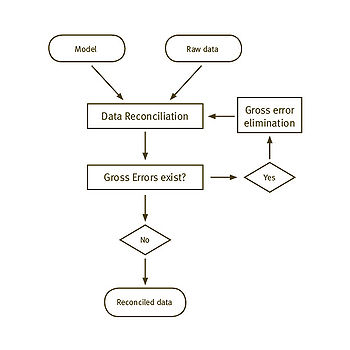 The workflow of an advanced data validation and reconciliation process.

Gross error relaxation targets at relaxing the estimate for the uncertainty of suspicious measurements so that the reconciled value is in the 95% confidence interval. Relaxation typically finds application when it is not possible to determine which measurement around one unit is responsible for the gross error (equivalence of gross errors). Then measurement uncertainties of the measurements involved are increased.

It is important to note that the remediation of gross errors reduces the quality of the reconciliation, either the redundancy decreases (elimination) or the uncertainty of the measured. Therefore it can only be applied when the initial level of redundancy is high enough to ensure that the data reconciliation can still be done (see Section 2,[9]).

Advanced DVR solutions offer an integration of the techniques mentioned above:

The result of an advanced DVR procedure is a coherent set of validated and reconciled process data.

DVR finds application mainly in industry sectors where either measurements are not accurate or even non-existing, like for example in the upstream sector where flow meters are difficult or expensive to position (see [10]); or where accurate data is of high importance, for example for security reasons in nuclear power plants (see [11]). Another field of application is performance and process monitoring (see [12]) in oil refining or in the chemical industry.

As DVR enables to calculate estimates even for unmeasured variables in a reliable way, the German Engineering Society (VDI Gesellschaft Energie und Umwelt) has accepted the technology of DVR as a means to replace expensive sensors in the nuclear power industry (see VDI norm 2048,[9]).