data.gov.uk is a UK Government project to open up almost all non-personal data acquired for official purposes for free re-use. Sir Tim Berners-Lee and Professor Nigel Shadbolt are the two key figures behind the project.[1]

The beta version of data.gov.uk has been online since the 30 September 2009 and by January 2010 more than 2,400 developers had registered to test the site, provide feedback and start experimenting with the data. When the project was officially launched in January 2010 it contained 2,500 data sets and developers had already built a site that showed the location of schools according to the rating assigned to them by education watchdog Ofsted.[2][3] 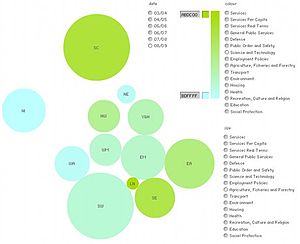 When data.gov.uk was officially launched in January 2010 Ordnance Survey data was one of the key data sets that Berners-Lee and Professor Shadbolt wanted to see opened up as part of the project. Ordnance Survey data was included in data.gov.uk on 1 April 2010[1] and provides information on geographical locations. According to Professor Shadbolt "will make a real difference to the way that people make sense of the information".[2]

On the 3 June 2010 the Treasury released the COINS data for the financial years 2008/09 and 2009/10.[5][6] The Combined Online Information System, known as COINS, operates as the UK Government's central accounting system. COINS data details the spent of all government department and their major spending programmes. The 4.3GB of COIN data included 3.2 million items for the financial year 2009/10 and was released using BitTorrent. The UK government has stated that data for the current financial year (2010/11) will be released in June 2011.[6] HM Treasury also cited "the impenetrability of the information to a lay user" and "the potential significant cost and difficulty of rebutting misunderstandings" as reasons for not releasing the data.[5] On the 15 of June the UK Government published the COINS data for the financial years 2008/09, 2007/08, 2006/07 and 2005/06 on data.gov.uk. Within 24 hours of the release the data was also made available through the RA.Pid Gateway webportal run by Rosslyn Analytics.[7]

The HM Treasury had refused previous requests to release COIN data on the grounds that it contained FOI-exempt data on future defence and security services spending.[6] HM Treasury also cited "the impenetrability of the information to a lay user" and "the potential significant cost and difficulty of rebutting misunderstandings" as reasons for not releasing the data.[5]

Data to be added

Data use and licensing 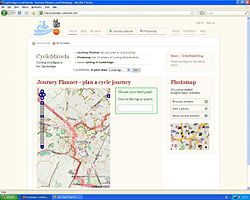 data.gov.uk offers a wide range of public sector data, ranging from traffic statistics to crime figures. The data can be used for private or commercial purposes. The aim is to kick-start the development of services that find novel ways to make use of the information.[2]

All data included in data.gov.uk is covered either by Crown Copyright, the Crown Database Right or have been licensed to the Crown. In turn, all data available on data.gov.uk is available under a worldwide, royalty-free, perpetual, non-exclusive license which permits use of the data under the following conditions: the copyright and the source of the data should be acknowledged by including an attribution statement specified by data.gov.uk, which is 'name of data provider' data © Crown copyright and database right. the inclusion of the same acknowledgement is required in sub-licensing of the data, and further sub-licenses should require the same. The data should not be used in a way that suggests that the data provider endorses the use of the data. And the data or its source should not be misrepresented.[8]

The Crown copyright license permits anyone to copy, distribute and transmit the data, adapt the data, exploit the data commercially, whether by sublicensing it, combining it with other data or by including it in products and applications. The terms of the license are aligned with any Creative Commons Attribution 3.0 License. Hence data.gov.uk data can be mixed with information licensed under Creative Commons licenses to create derivative work, which can be distributed under the Creative Commons Attribution 3.0 license. When users submit information to data.gov.uk it is assumed that grant the Crown a non-exclusive, irrevocable right to use and pass on all public information submitted, such as descriptions of ideas and screenshots of apps, as well as the right to re-use allow the re-use of that information. All content on the site is placed under the same license terms as the data, though user ideas and application remain their own.[8]

The Crown copyright license does not affect fair dealing or fair use rights, or any other exceptions and limitations to copyright or database rights. The data is licensed "as is" and data.gov.uk does not accept liabilities in relation to the data or provide warranties. Neither does data.gov.uk guarantee the continued supply of the data.[8]

Authorized by the UK Cabinet Office and aims for the release of public data to become "business as usual" across public bodies, as set out in Putting the Frontline First: Smarter Government, which established the UK Government's approach to public data and the release of that data. data.gov.uk amongst others delivers on the commitment made in Putting the Frontline First to integrate data from the Publications Hub for National Statistics and to release more data relating to health.[3]

Sir Tim Berners-Lee and Professor Nigel Shadbolt are the two key figures behind the project.[1] According to Berners-Lee "Government data is something we have already spent the money on... and when it is sitting there on a disk in somebody's office it is wasted." Professor Shadbolt told the BBC that "A lot of this is about changing assumptions" and that if the data "can be published under an FOI (Freedom of Information) request why not publish it online?".[2] In April 2010, commenting on the opening up of Ordnance Survey data Berners-Lee said that: "The changes signal a wider cultural change in Government based on an assumption that information should be in the public domain unless there is a good reason not to - not the other way around." He went on to say "Greater openness, accountability and transparency in Government will give people greater choice and make it easier for individuals to get more directly involved in issues that matter to them."[1]

The site uses the CKAN platform for data publishing.

Similar projects in the UK

Similar projects in other countries

There is a growing trend amongst governments toward more data transparency. In the US the Obama administration launched data.gov, which opens up data from various departments, including the US Defence Department and NASA.[2]