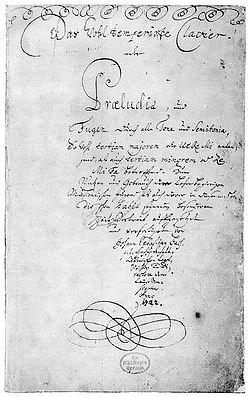 The Well-Tempered Clavier (German: Das Wohltemperierte Klavier),[2] BWV 846–893, is a collection of solo keyboard music composed by Johann Sebastian Bach. He first gave the title to a book of preludes and fugues in all 24 major and minor keys, dated 1722, composed "for the profit and use of musical youth desirous of learning, and especially for the pastime of those already skilled in this study." Bach later compiled a second book of the same kind, dated 1742, but titled it only "Twenty-four Preludes and Fugues." The two works are now usually considered to make up a single work, The Well-Tempered Clavier, and are referred to respectively as Books I and II.[3] The Well-Tempered Clavier is generally regarded as one of the most influential works in the history of Western classical music.[3]

The first book was compiled in the year 1722 during Bach's appointment in Köthen; the second book followed it 20 years later in 1742 while he was in Leipzig. Both were widely circulated in manuscript, but printed copies were not made until 1801, by three publishers almost simultaneously in Bonn, Leipzig and Zurich.[4] Bach's style went out of favour in the time around his death, and most music in the early Classical period had neither contrapuntal complexity nor a great variety of keys. But, with the maturing of the Classical style in the 1770s, the Well-Tempered Clavier began to influence the course of musical history, with Haydn and Mozart studying the work closely.

Each book contains twenty-four pairs of preludes and fugues. The first pair is in C major, the second in C minor, the third in C-sharp major, the fourth in C-sharp minor, and so on. The rising chromatic pattern continues until every key has been represented, finishing with a B-minor fugue.

Bach recycled some of the preludes and fugues from earlier sources: the 1720 Klavierbüchlein für Wilhelm Friedemann Bach, for instance, contains versions of eleven of the preludes. The C-sharp major prelude and fugue in book one was originally in C major - Bach added a key signature of seven sharps and adjusted some accidentals to convert it to the required key. The far-reaching influence of Bach's music is evident in that the fugue subject in Mozart's Prelude and Fugue in C Major K. 394 is isomorphic to that of the A-flat major Fugue in Book II of the Well-Tempered Clavier. This pattern is found also in the C Major fugue subject of Book II. Another similar theme is the third movement fugue subject in the Concerto for Two Harpsichords, BWV 1061.

Bach's title suggests that he had written for a (12-note) well-tempered tuning system in which all keys sounded in tune (also known as "circular temperament"). The opposing system in Bach's day was meantone temperament[citation needed] in which keys with many accidentals sound out of tune. (See also musical tuning). It is sometimes assumed that Bach intended equal temperament, the standard modern keyboard tuning which became popular after Bach's death, but modern scholars suggest instead a form of well temperament.[5] There is debate whether Bach meant a range of similar temperaments, perhaps even altered slightly in practice from piece to piece, or a single specific "well-tempered" solution for all purposes.

Although the Well-Tempered Clavier was the first collection of fully worked keyboard pieces in all 24 keys, similar ideas had occurred earlier. Before the advent of modern tonality in the late 17th century, numerous composers produced collections of pieces in all eight modes: Johann Pachelbel's magnificat fugues (composed 1695–1706), Georg Muffat's Apparatus Musico-organisticus of 1690 and Johann Speth's Ars magna of 1693 are but a few examples. Furthermore, some two hundred years before Bach's time, equal temperament was realized on plucked string instruments, such as the lute and the theorbo, resulting in several collections of pieces in all keys (although the music was not yet tonal in the modern sense of the word):

Ariadne musica neo-organoedum, by J.C.F. Fischer (1656–1746) was published in 1702 and reissued 1715. It is a set of 20 prelude-fugue pairs in ten major and nine minor keys and the Phrygian mode, plus five chorale-based ricercars. Bach knew the collection and borrowed some of the themes from Fischer for Well-Tempered Clavier.[13] Other contemporary works include the treatise Exemplarische Organisten-Probe (1719) by Johann Mattheson (1681–1764), which included 48 figured bass exercises in all keys,[14] Partien auf das Clavier (1718) by Christoph Graupner (1683–1760) with eight suites in successive keys,[15] and Friedrich Suppig's Fantasia from Labyrinthus Musicus (1722), a long and formulaic sectional composition ranging through all 24 keys which was intended for an enharmonic keyboard with 31 notes per octave and pure major thirds.[14][16] Finally, a lost collection by Johann Pachelbel (1653–1706), Fugen und Praeambuln über die gewöhnlichsten Tonos figuratos (announced 1704), may have included prelude-fugue pairs in all keys or modes.[17]

Bach's example inspired numerous composers of the 19th century, however, in his own time no similar collections were published, except one by Johann Christian Schickhardt (1681–1762), whose Op. 30 L'alphabet de la musique, contained 24 sonatas for recorder/flute/violin, in all keys.[18] 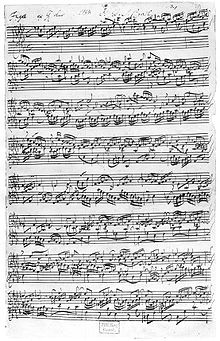 Musically, the structural regularities of the Well-Tempered Clavier encompass an extraordinarily wide range of styles, more so than most pieces in the literature.[citation needed] The Preludes are formally free, although many individual numbers exhibit typical Baroque melodic forms, often coupled to an extended free coda (e.g. Book I preludes in C minor, D Major, and B-flat major).

Each fugue is marked with the number of voices, from two to five. Most are three- and four-voiced fugues. The fugues employ a full range of contrapuntal devices (fugal exposition, thematic inversion, stretto, etc.), but are generally more compact than Bach's fugues for organ.

The best-known piece from either book is the first prelude of Book I, a simple progression of arpeggiated chords. The technical simplicity of this C Major prelude has made it one of the most commonly studied piano pieces for students completing their introductory training. This prelude also served as the basis for the Ave Maria of Charles Gounod.

Although the Well-Tempered Clavier was not the first pantonal (using all keys) composition, it was by far the most influential. The very nature of the piece (as implied by its title page) established a tuning requirement for harmonies which were to become the basis for all Western music developed through the early 20th century[citation needed]. The Well-Tempered Clavier does not include very remote modulations, but instead demonstrates the ability of a single instrument in tempered tuning to play in all 24 keys without having to be tuned to new fundamentals.[clarification needed] Beethoven, who made remote modulations central to his music, was heavily influenced by the Well-Tempered Clavier, since performing it in concerts in his youth was part of his star attraction and reputation. Further reaching modulations to remote harmonic regions were mostly associated with later Romantic and post-Romantic music, ultimately leading to the functional extension in jazz harmony. The atonal system of the 20th century, although still taking the 12-tone chromatic scale (that Bach used) as a foundation, effectively did away with musical keys altogether.

In addition to its use of all keys, the Well-Tempered Clavier was unusual in the very wide range of techniques and modes of expression used by Bach in the fugues. No other composer had produced such vividly characterised and compelling pieces in the fugal form, which was often regarded as a theoretical exercise. Many later composers studied Bach's work in an effort to improve their own fugal writing: Verdi even found it useful for his last work, Falstaff.[citation needed]

The first complete recording of the Well-Tempered Clavier was made by Edwin Fischer between 1933 and 1936. Other notable recordings have been made by Wanda Landowska, Rosalyn Tureck, Glenn Gould, Friedrich Gulda, Gustav Leonhardt, Sviatoslav Richter, Ralph Kirkpatrick, Angela Hewitt and Andras Schiff.

During much of the 20th century it was assumed that Bach wanted equal temperament, which had been described by theorists and musicians for at least a century before Bach's birth. Internal evidence for this may be seen in the fact that in Book 1 Bach paired the E-flat minor prelude (6 flats) with its enharmonic key of D-sharp minor (6 sharps) for the fugue. This represents an equation of the most tonally remote enharmonic keys where the flat and sharp arms of the circle of fifths cross each other opposite to C major. Any performance of this pair would have required both of these enharmonic keys to sound identically tuned, thus implying equal temperament in the one pair, as the entire work implies as a whole. However, research has continued into various unequal systems contemporary with Bach's career. Accounts of Bach's own tuning practice are few and inexact. The three most cited sources are Forkel, Bach's first biographer, Friedrich Wilhelm Marpurg, who received information from Bach's sons and pupils, and Johann Kirnberger, one of those pupils.

Forkel reports that Bach tuned his own harpsichords and clavichords and found other people's tunings unsatisfactory; his own allowed him to play in all keys and to modulate into distant keys almost without the listeners noticing it. Marpurg and Kirnberger, in the course of a heated debate, appear to agree that Bach required all the major thirds to be sharper than pure—which is in any case virtually a prerequisite for any temperament to be good in all keys.

Johann Georg Neidhardt, writing in 1724 and 1732, described a range of unequal and near-equal temperaments (as well as equal temperament itself), which can be successfully used to perform some of Bach's music, and were later praised by some of Bach's pupils and associates. J.S. Bach's son Carl Philipp Emanuel Bach himself published a rather vague tuning method which was close to but still not equal temperament: having only "most of" the fifths tempered, without saying which ones or by how much.

Since 1950 there have been many other proposals and many performances of the work in different and unequal tunings, some derived from historical sources, some by modern authors. Whatever their provenances, these schemes all promote the existence of subtly different musical characters in different keys, due to the sizes of their intervals. However, they disagree as to what key receives what character:

More recently there has been a series of proposals of temperaments derived from the handwritten pattern of loops on Bach's 1722 title page. These loops (though truncated by a later clipping of the page) can be seen at the top of the title page image at the beginning of the article.

Despite this recent research, however, many musicologists say it is insufficiently proven that Bach's looped drawing signifies anything reliable about a tuning method. Bach may have tuned differently per occasion, or per composition, throughout his career.