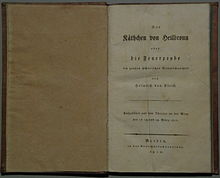 Käthchen of Heilbronn or The Trial by Fire (1807–1808) is a "great historical knightly play" (ein großes historisches Ritterschauspiel) in five acts by the German playwright Heinrich von Kleist. The action of the drama takes place in Swabia during the Middle Ages.

The play was first performed at the Vienna Theater on March 17, 1810 and then published in the same year. Originally, the first two acts appeared separately with the play Phöbus, also by Kleist. Although the play has gained respect among modern audiences, it was originally largely rejected. As a result, the play was only seen in Bamberg, due to the rejection of the piece by the more famous Dresdener Hoftheater and the Berliner Schauspielhaus. 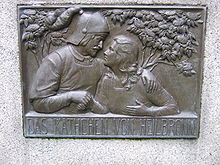 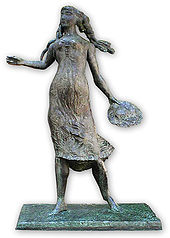 The play begins in the secretly convened court in which Count von Strahl is being accused by Theobald, a blacksmith in the town of Heilbronn, of bewitching his young and beautiful daughter Käthchen. In the court they refer to several events in which Käthchen shows an unnatural possession. The first being when Count von Strahl enters his shop and Käthchen bows before him “as if struck by lightning”. The second and more daring attempt by Käthchen to follow the Count involves her throwing herself out of a second story window as he leaves. Using almost bully like tactics of interrogation, Käthchen confesses to never having been bewitched. Upon this interrogation of Käthchen, the highly esteemed Count is found not guilty of any action involving Theobald’s daughter and the court dismisses the case entirely.

Act 2 – In a forest near the underground cave of the Secret Court. Later in the mountains near a coal miner's hut. It is night with thunder and lightning

At the beginning of Kleist’s second act Count von Strahl enters into a monologue about his yearning and passionate love for Käthchen. Throughout the monologue it becomes increasingly evident that he will never act upon these feelings, given the vast social class division. We also learn of the Count’s enemy Kunigunde, who’s impending lawsuits would take away much of Strahl’s rightful lands. Her former suitor, Maximillion Frederick, however, has kidnapped Kunigunde. Strahl unknowingly defeats her enemy’s capturer and frees Kunigunde. The rules of hospitality at the time require that he invite her back to his castle, whereupon she learns of a dream. The dream indicates that he will find his future bride in the daughter of the emperor. Kunigunde, aware of the information, presents herself as this prophesized woman. Soon after the Count begins to consider making Kunigunde his wife.

Act 3 – Hermitage in a mountainous forest. Later at the Thurneck Castle

Käthchen, in her shame, wants to enter a convent despite her father’s objections. In a last attempt to keep his daughter out of the convent, Theobald suggests that she follow Count von Strahl. The Rhine Graf, now betrayed by Kunigunde, decides to attack Count von Strahl. Through a series of unforeseen events Käthchen intercepts his plans to attack and rushes off to warn Strahl. After his refusal to read the letter, he threatens to whip Käthchen for returning. Eventually Strahl reads the letter and learns of the impending attack. After the fighting has subsided Kunigunde sees an opportunity to get rid of Käthchen and sends her into a burning building to retrieve a cherub. Käthchen, with the help of an angel, escapes the building unscathed.

Act 4 – In the mountains, surrounded by waterfalls and a bridge. Later at the Strahl Castle

Strahl pursues the Rhine Graf and Käthchen accompany them. Käthchen falls asleep beneath an elderberry bush where Strahl questions her. Through questioning they discover that they have met already in their dreams. The Count then begins to realize that Käthchen is his real prophesized wife. Käthchen walks in on Kunigunde during her bathing and is so shocked by what she sees that she cannot speak a word. Kunigunde, having been discovered, decides to have Käthchen poisoned.

Strahl confronts the emperor about the validity of Käthchen’s nobility and in a monologue of the emperor he confesses that he is her biological father. Strahl invites Käthchen to his wedding, but in a twist she learns that it is her wedding. Shocked by this sudden turn of events, Käthchen passes out and the play ends in turmoil.

In a letter to Marie v. Kleist (Berlin, Summer 1811), Heinrich v. Kleist wrote: "The judgement of the masses has governed me too much until now; especially Käthchen von Heilbronn bears witness to that. From the beginning, it was a marvellous concept and only the intent to adapt it for stage play has lead me to mistakes that I would now like to cry over. In short, I want to soak up the thought that, if a work is only quite freely sprung from one human mind, then that same work must necessarily belong to whole mankind."[1]

"Because he who loves Käthchen cannot complete disregard Penthesilea because they belong together like the + and - of algebra, and they are one and the same being, only imagined out of contrary relations."[2] Kleist in a letter to Heinrich J. von Collin (December 8, 1808).

"I am now eager to learn what you would have to say about Käthchen, because it is the reverse of Penthesilea, her opposite pole...?"[3] Kleist in a letter to Marie von Kleist (late autumn 1807)

The trial by fire is originally a medieval ordeal meant to test the innocence of a defendant in undecided court cases. There were several types of trials by fire: walking barefoot over hot coals, holding a hot piece of iron in one's hands, or wearing a shirt dipped in hot wax. Whoever managed to survive such an ordeal was considered innocent. Other ordeals were also common, wherein the defendant with hands and feet bound together was thrown into water. Drowning confirmed the defendant's innocence, while staying afloat confirmed the guilty status and the defendant was then put to death. The trial by fire in this text is not referring to an actual ordeal, but simply a test for Käthchen. She passes this test when she returns safely from the burning Thurneck Castle with the help of an angel.[4]