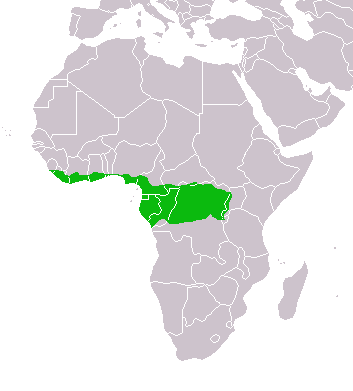 range_map_width = 240pxThe water chevrotain ("Hyemoschus aquaticus"), also known as the fanged deer, is a small ruminant found in tropical Africa. It is the largest of the four species of s, evolutionarily primitive which are similar to deer but are barely larger than small dogs. The water chevrotain is found mostly in coastal West Africa and the rainforests of central Africa.

The water chevrotain has a stocky, rounded body, thin legs with hooves, and a mouselike head. The male has s, which give the species the appellation "fanged deer". As its other common name suggests, the water chevrotain is a good swimmer and can dive underwater. Its nostrils are slits which it can squeeze shut to keep water out. It will never stray far from a water source, and it will retreat to water and jump in when threatened. It has a reddish brown coat with white stripes and spots. Adults average 10-12 kilograms and up to 80 centimeters in length.

Chevrotains are true ruminants, feeding mostly on a diet of plants, especially fruit. The water chevrotain is nocturnal and mainly solitary. Males' territories overlap those of females, but the males are rarely aggressive toward each other. While they do occasionally fight, using their tusks as weapons, they apparently prefer to avoid each other and keep to themselves. An estrous female will mate with the male with whom she shares a home range, and then gives birth to one precocial fawn.

The water chevrotain is a vulnerable species due to two main forces. Its tropical rainforest habitat is being rapidly consumed by humans, and the animals themselves are hunted for .