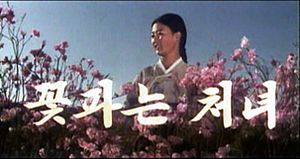 The Flower Girl (Korean: 꽃파는 처녀; RR: Kkot Pa-neun Cheo-nyeo) is a North Korean revolutionary genre theatrical performance, supposedly written by Kim Il-Sung himself according to official North Korean sources[1][2]. The performance is considered as one of the "Five Great Revolutionary Operas" (Korean: 5대 혁명가극), a group of classical, revolution-themed opera repertoires well received within North Korea[1][3][4]. It was also made into a novel.[5][6] A film adaption of the opera starring Hong Yong-hee was made in 1972[1].

The story is set during the 1930s, and is based on the anti-Japanese guerrilla movement during the period of Japanese occupation in Korea[2][4][7]. A poor, rural girl, around whom the plot is centred, picks flowers on the mountain every day to sell at the market, to care for her ill mother. Additionally, she has a blind sister, and her father is deceased. Her mother is in debt to the landlord, and is bankrupt and unable to purchase food. The landlord's subordinates frequently harass the girl and call for her to work for them, to which her mother refuses. The girl then finds her blind sister attempting to earn money by singing on the street, to her anger.

Eventually, she collects enough money to purchase medicine for her ill mother, but by the time she returns, her mother had already died. The landlord's wife becomes very sick, and suspects that the flower girl's blind sister is possessed by the spirit of her deceased mother, and so arranges for her to be frozen to death in the snow. When the flower girl returns home and asks where her sister had gone, the landlord's subordinates chain her up. At this moment, her brother, who had joined the Revolutionary Army, returns home to visit family when he realises that the flower girl had been locked up, and so organises a group of villagers to overthrow the landlord.

According to Kim Il-sung's personal memoirs, he personally created the ideas and foundation for the play himself whilst in a Jilin prison during the 1930s[2][5]. The first section of his 1992 memoir With the Century (Chinese: 与世纪同行), entitled "Anti-Japanese Revolution" (Chinese: 抗日革命), notes that[6]:

"There was a time during our country's independence movement where we held on to our vision to build an "ideal village" concept... At the time, we adopted the Korean students in Jilin to teach village people to sing a large variety of revolutionary songs, such as the Red Flag Song and Revolution Song. In Wujiazi we formed a performance group based at Samsong school led by Kye Yong-chun. It was during this time that I was completing the script for The Flower Girl, which I had started whilst I was in Jilin City. Upon finishing the script, production of the opera began, and we staged the opera in the Samsong school hall on the 13th anniversary of the October Revolution. For many years after liberation, the opera hadn't been performed since, until it was improved and adapted for film, and re-written as a novel, under the guidance of the Organising Secretary (Kim Jong-il) and released in the early 1970s."[FN 1]

Although it is commonly stated that Kim Il-sung was the sole author of the production, many critics in China cast doubts over the reliability of the claim, and suggest that other North Korean writers may have also had some form of interaction in the opera's production.

The first official premiere of the opera production was held on November 30, 1972 in Pyongyang, where it was hailed as a great success.[8]

According to official North Korean reports, in April 1968, Kim Jong-il suggested that another revolutionary opera, Sea of Blood, be adapted for a film. Since then, other works have also been adapted into movies "under his guidance", including The Flower Girl[4][8][9]. The opera was intended to promote the communist ideology, by incorporating themes such as the class struggle against the bourgeois[10]; such themes were similarly maintained in the film[8].

In April 1972, the film adaptation was officially launched. The film was directed by Choe Ik-kyu and the script was written by Pak Hak; Paekdu-san Group was responsible for the production of the film.[11]

The opera and its film adaptation were both well received in the People's Republic of China when they were introduced there since September 9, 1972, predominantly during the closing period of the Cultural Revolution and the beginning of the era of Deng Xiaoping's rule, where the production was known by the name of The Flower-selling Girl (Chinese: 卖花姑娘; pinyin: mài huā gū niang)[2][8][12][13]. A number of theatrical tours were made in China, which were performed in 1973, 1998, 2002 and 2008[8][14]. In 2009, Chinese Premier Wen Jiabao was received by Hong Yong-hee during his visit to North Korea.

As of 2008, the opera has been performed over 1,400 times in North Korea and more than 40 other countries[2], mostly Eastern Bloc states; other countries include France, Italy, Germany, Algeria and Japan.[4][8] The title of the opera and film was known as Blomsterflickan in Sweden, Das Blumenmädchen in the German Democratic Republic, Kvetinárka in Czechoslovakia, and Kwiaciarka in Poland.

In China, the film adaptation of the opera was dubbed by the Changchun Film Studio, based on translations by He Mingyan, who was earlier responsible in 1958 in the translation of the North Korean film adaptation of Chunhyangjeon.[15] The entire translation process for The Flower Girl took only seven days.[15] Although the dialogue was dubbed in Mandarin Chinese, song lyrics remained in Korean. As the film was played in Chinese cinemas during the period of the Cultural Revolution, the movie became immensely popular due to its proletarian revolution-based content, to the point where theaters even adopted a 24-hour screening cycle because of high ticket sales.[15]

In South Korea, the film was deemed as communist propaganda and a symbol of the enemy, and screening was banned; police were often mobilised when university students were found playing the film on campus, and the students were often accused of being sympathetic with the North.[11] In 1998, the Supreme Court of South Korea ruled that The Flower Girl and six other North Korean films were "not favouring anti-ROK sentiments" in regards to national security laws.[11]

At the 18th Karlovy Vary International Film Festival in 1972, The Flower Girl film adaptation was awarded the special prize.[11] Hong Yong-hee is depicted on a North Korean won bank note, in her role as the flower girl.[11]