Darryl Neilson is a fictional character on the New Zealand soap opera Shortland Street. Darryl was portrayed by Mark Ferguson from 1992 to the characters death in 1995.

Introduced as the sinister son of receptionist Marj Neilson (Elizabeth McRae) and paramedic Tom Neilson (Adrian Keeling), the character got involved in many antagonistic situations including; getting teenage brother, Stuart (Martin Henderson) to claim paternity of his child, an attempted rape of Kirsty Knight (Angela Dotchin), faking illness to get closer to Alison Raynor (Danielle Cormack), faking abduction of his own children, storing drugs at his mothers house and locking Chris Warner (Michael Galvin) in a barn on his wedding day, amongst others. The characters long running feud with the young Kirsty, eventually saw Darryl drown, falling off a boat while attempting to murder her.

The character still stands as one of the most iconic villains on the soap and a character that fans "love to hate".

Darryl was created as the soap's recurring antagonist and part of the Neilson family unit. Without auditioning, Mark Ferguson was offered the role in what he saw as typecasting due to his widows peak.[1]

In the opening episode of the series, Stuart Neilson (Martin Henderson) claims paternity of a new born baby. Stuart's father, Tom (Adrian Keeling) and mother Marj (Elizabeth McRae), do not believe him and Tom later suspects Stuart's older brother Darryl of the crime. Darryl arrives to the street in October and reveals he is the father, before starting to date Kirsty (Angela Dotchin). Kirsty starts to reject his advances and Darryl attempts to rape her. When Tom finds out, he kicks him out of the house.

Darryl returned in 1993 to a very distressed Kirsty. He became fixated with Alison (Danielle Cormack) while working with her on a fundraiser and faked an illness, to get closer to her. Realizing he would never get her due to her upcoming wedding to Chris Warner (Michael Galvin), Darryl decided to plot against the two. He drugged Chris the night before the wedding and locked him in a barn, causing the wedding to be called off and for Alison to flee the country. Darryl returned once again when father Tom returned after going missing, Darryl surrended his kidney to Tom, only for Tom to die of a heart attack. Darryl tried to tear his mother and boyfriend Laurie (Chic Littlewood) apart, but failed and later helped Alison cover up Jean-Luc's (Pierre Foret) death.

Darryl again returned in 1994 and began dating Grace (Lynette Forday), only to steal her eggs. After a argument with wife Dianne (Susannah Devereux), Darryl faked the abduction of his two children, only to be exposed by Kirsty. He began to operate in illegal drug smuggling and devastated Marj, when she realized he was using her house as storage. Darryl decided to get revenge on Kirsty by ruining her wedding and convinced Stuart to stop the marriage at the altar. 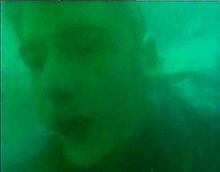 Darryl's reign of terror is finally over, when he drowns in the ocean.

In 1995 Darryl's drug company supplied Kirsty's husband Lionel (John Leigh) with faulty drugs, putting him into a coma. Kirsty confronted Darryl on the houseboat, "The Toroa". A furious Darryl attempted to murder Kirsty, only to fall overboard and go missing. His body was later located floating in the sea.

Darryl's twin brother Damien later turned up at Shortland Street scaring Kirsty in to thinking that her arch nemesis had returned from the dead. However, Damien was nothing like his twin brother. Damien's presence caused Kirsty to remember that she had indeed killed Darryl herself, but Damien convinced her not to confess to the crime. After Damien got burnt in an accident, Kirsty realised she had fallen in love with Damien and the two left Ferndale tegether.

Throughout Darryl's run on Shortland Street, he was identified as cunning, evil and nasty.[2] Ferguson described the character as dynamic, saying; "I really like playing the part, because whenever he's there, he makes things happen. He's a very dynamic character. He really gets people involved with the show."[1] He also stated that Darryl was cunning, but not smart; "I try and put some of my own sense of humour in Darryl. I like to give him lots of different sides. He's very ambitious, like he can control situations around him. But he's not that bright, really. If he was just a bit smarter he'd be worth an absolute fortune. ... If Darryl was just a bit smarter, if he heightened his sights, then he could come back and try for Prime Minister".[1]

The character of Darryl was written as a "villain" archetype.[3] The character is remembered heavily for his antagonistic characteristics. His most prominent storyline was when he locked major character Chris Warner in a barn, so as he would miss his wedding day, a storyline often recollected on by actors and producers.[4][5] However the character also went through numerous other storylines, including the very first episode where Darryl fathered a child, only to push responsibility onto his teenage brother.[6] The character of Darryl was said to be introduced to further develop the character of Marj and make her less comic relief.[7] The character's evil nature was so great, producer Steven Zanoski thought it was a great precedent for villains to follow.[7] Darryl's character also helped the audience sympathize with Marj, having her stuck with a "no-good" son.[7] Darryl's character was truly explored within his first year, when Darryl cruely attempted to rape Kirsty and forced his wife to provide him with an alibi so no charges would be laid.[6] The character reached his peak villainy when he stole girlfriend Grace's eggs and started to use Marj's house as storage for illegal drugs.[6] The character finally reached his end when he fell off a boat and drowned,[8] while trying to murder Kirsty.[6] It has been suggested that it was always obvious Darryl was to get his comeuppance as this was part of fulfilling the "villain" archetype.[3]

Darryl has been described as the soap's "original badboy"[6] and Ferguson described him as a character fans "loved to hate".[1] Darryl has since become an iconic character, being awarded the third best character alongside brother Damien, to ever feature on the soap.[9]