Diagram of the Metropolitan Goods lines.

The Metropolitan Goods Railway Line is a network of goods (or freight) railway lines in the suburbs of Sydney, Australia. 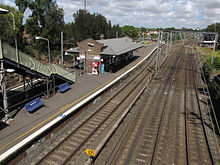 The Metropolitan Goods railway line runs parallel to the Bankstown railway line between Marrickville and Campsie. The eastern junction of the Rozelle branch can be seen to the right.

The line starts at Port Botany in Sydney's south east and runs in a westerly direction, joining the Bankstown passenger railway line at Marrickville and running beside the Bankstown Line to the suburb of Campsie, where it branches off to the north west to serve the Enfield marshalling yards. From the yards, connections are provided to the passenger lines at Flemington to the north and Sefton to the west.

There are also two former branch lines. The first of these leaves the main line at Dulwich Hill and heads north through Lewisham, passing beneath the Main Suburban Railway before heading north through Lilyfield to the Glebe Island port and Rozelle Goods yard. A further branch of the line from Lilyfield passes through Glebe then swings north to loop through the former industrial suburb of Pyrmont, before passing beside Darling Harbour.[1] Here, it served the former large Darling Harbour Goods yard.[2] It then heads south - including through a tunnel under Railway Square - to join Sydney Yard, adjacent to Regent Street station.[3] The tunnel is the oldest railway tunnel in New South Wales.[4] 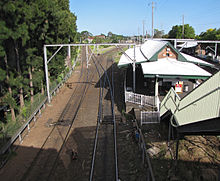 The connection to the Illawarra line at Marrickville branches away to the left. It passes beneath the line to Botany and the Bankstown line.

The line was electrified from a connection to the Illawarra line at Marrickville to the Rozelle goods yard / Flemington / Sefton, although no electrified freight trains now run in New South Wales. 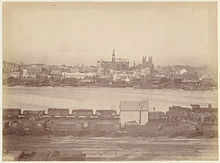 The Darling Harbour goods line sidings in the 1880s, looking towards the city

From the time when the "Sydney Railway Company" was formed in 1848, it had been the intention of the company to build a freight terminal at Darling Harbour. To this end, a railway line was constructed between the Sydney Railway Station (the predecessor to Central Railway Station and Darling Harbour, which opened on 26 September 1855.[5] Initial traffic was spoil for the construction of the Main Suburban Line (now the Inner West Line) between Sydney and Parramatta, then for the carriage of departmental coke for steam engines, and a small amount of timber from 1860. Initial reports of the traffic on the line suggested that freight revenue amounted to only £20 a year, and there was only 60 tonnes of coke carriage a week.[5]

Other problems beset the line in the 1860s. Darling Harbour had begun to silt up by 1863, and the 3d. charge per person, each way on the nearby Pyrmont Bridge (at that time privately-owned) was a turnoff to traders looking to use the railway for the transport of their goods. Other factors combined to offset these problems: a plan to convey goods by horse tram to Circular Quay turned out to be a failure; traffic in hay, straw and chaff was transferred to the Darling Harbour yards in 1878; and by 1881, the main goods terminal in Sydney had become overcrowded, leading to directions that traffic for Sydney was to be directed to Darling Harbour. The Pyrmont Bridge was later purchased by the New South Wales Government for £48,600. By 1891, all outwards goods traffic was also being dispatched from Darling Harbour.[6]

By 1908, goods traffic on the line to Darling Harbour and the neighbouring suburban lines had become excessive, with 592 wagons arriving each day and 512 being dispatched.[6] It was decided to construct separate goods lines from Sefton to Darling Harbour via Enfield, Dulwich Hill and Rozelle, with extensions to Botany and the State Abattoirs at Homebush Bay. The initial scheme, approved by the Parliamentary Committee on Public Works, approved the initial line from Dulwich Hill to Darling Harbour. To avoid an opening rail bridge alongside the existing Glebe Island Bridge, a circuitous route was built around Rozelle Bay through the suburb of Pyrmont. The proposal, which included two tunnels under Pyrmont and Glebe, was approved on November 23, 1914, and the line opened on 23 January 1922.[7]

An additional Goods Yard was established at Cooks River in 1947.[8] This yard connects with the Port Botany line to the east of the Princes Highway overbridge.

The demise of the working harbour

The Darling Harbour branch experienced widespread use throughout the early 20th century. With the use of containers and the decentralisation of freight terminals in Sydney to places such as Port Botany and Chullora, Darling Harbour traffic was reduced considerably, ceasing altogether on October 26, 1984.[6] There were unrealised plans to run suburban trains in the 1980s,[9] so the branch was left to intermittent goods traffic - including a weekly wheat train to the Edwin Davey Flour Mill near Wentworth Park.[4] This ceased on 22 January 1996, and the Darling Harbour loop closed.[7] 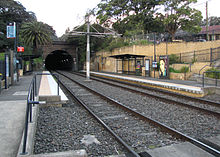 Jubilee Park light rail station. The portal for the tunnel under Glebe can be seen.

Following its closure, most of the Darling Harbour branch was converted into the Metro Light Rail.[10] The first section, from Central to Wentworth Park opened in 1997 to serve the redeveloped Darling Harbour, Star City casino and the new residential developments in Pyrmont. In 2000, the light rail was extended to the end of the branch at Lilyfield. The remainder of the branch was adapted to serve the Powerhouse Museum. The line from the Museum connects with Sydney Yard and is still in occasional use to transfer locomotives to and from the Museum. 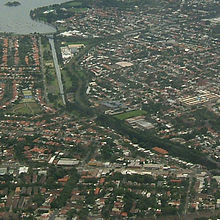 During the 2000s the section between Dulwich Hill and Rozelle also saw a considerable decline in traffic. Rozelle goods yard became overgrown but was used intermittently for the storage of disused railway wagons and passenger cars. Eventually, the sole traffic was a service to deliver cereals to a flour mill at Summer Hill. In 2009 the mill relocated to Maldon in the Southern Highlands and all traffic on the line ceased.

In 2010 the NSW Government announced the extension of the light rail from Lilyfield to Dulwich Hill utilising the disused line.

In August 2004, the Australian Rail Track Corporation and Rail Corporation New South Wales entered into an agreement for ARTC to lease the Metropolitan Freight Network,[11] specified as being the dedicated freight lines within the rail corridors:

The ARTC is constructing the Southern Sydney Freight Line to extend the freight network from the end of the Metropolitan Goods Line at Sefton to Macarthur.

The goods lines once had a number of passenger stations along them, to service workers at local industries and railway facilities: