Dark Prince: The True Story of Dracula (alternately titled Dracula: The Dark Prince and Dark Prince: Legend of Dracula[2]) is a horror-war television film, which premiered in the United States on the USA Network on Halloween, October 31, 2000. It is about Vlad III Dracula, "the Impaler", the historical figure who gave Bram Stoker's Dracula his name.

Dark Prince: The True Story of Dracula tells the story of Vlad Dracula, the historical figure who gave Bram Stoker's Dracula his name. Vlad is a dispossessed noble, and a patriot who fights the occupation forces of the Turks hoping to avenge the murder of his father by Romanian nobles and the capture of his brother by the Ottoman sultan. The King of Hungary (Roger Daltrey) becomes Vlad's ally and, with his support, Vlad and his men attack the occupying Turks and turncoat Romanian boyars, and seizes the throne of Wallachia.

His bride Lidia (Jane March) discovers what Vlad does to the bodies of his enemies and is horrified. She begins to lose her grip on sanity, claiming to hear the voices of the dead. He reluctantly banishes her to a nunnery, which he later regrets and amends. Lidia, however, remains the same and ultimately commits suicide, leaving Vlad dispirited and alone with their adolescent son. Vlad's brother Radu arrives at the head of a large Turkish invasion force.

The narrative of the film is presented as evidence given at a hearing following Vlad's alignment with the Roman Catholic King of Hungary. At the end of the film, Vlad is excommunicated by the Orthodox Church shortly before being assassinated by Radu. As a result of his condemnation by the priests, Vlad is found to have risen from the grave and gained eternal life, free to roam the earth (as he has been denied entrance to both Heaven and Hell), implying that he has now become the very vampire for which his name is famous. 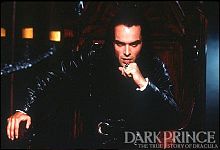 Critical reaction to Dark Prince: The True Story of Dracula has been mixed. John Walsh of Maxim said, "For such a familiar story, Dark Prince has all the excitement of something brand new. These characters can easily become caricatures, growling for gore and calling down vengeance from heaven. But the excellent cast and ferocious battle scenes make for one of the best war movies to hit TV in a while."[3] Ryan Cracknell of the Apollo Movie Guide wrote, "Despite the weak acting, Dracula: The Dark Prince is a welcome extension of the Dracula brand. Unlike the multitudes of generic rip-offs that come out annually, this low-key effort finally puts a new spin on an old myth."[4]

Mark Bourne of The DVD Journal said, "It plays hell with the facts and reduces its potentially gripping subject to cheesy soap operatic melodrama. ... It's not awful, but it is awfully ordinary. For the real goods, find McNally and Florescu's Dracula: Prince of Many Faces: His Life and Times instead."[5] Christopher Null of Filmcritic.com said, "It's obviously fluffed up but at the same time it's a bit repetitious, with countless battle scenes that don't offer much closure. In the end we're left with the notion that Vlad the Impaler was (and remains) a national hero, not a demon walking among the dead. And that might put a crimp in your enjoyment of the Bram Stoker stories."[6] Melissa J. Perenson of SciFi.com wrote, "Though flawed, Dark Prince nonetheless offers a rough-hewn look at the man who would be known simply as Dracula. But the lack of connection between the so-called reality and the modern-day myth left me wanting."[7]