Call of Cthulhu: Dark Corners of the Earth

Call of Cthulhu: Dark Corners of the Earth

Call of Cthulhu: Dark Corners of the Earth is a Lovecraftian horror first-person action-adventure game developed by Headfirst Productions and published by Bethesda Softworks in 2005, in conjunction with 2K Games. The game was released for the PC and Xbox systems; the Xbox version is officially compatible with the Xbox 360 in certain regions.[1]

The game is based on the works of H. P. Lovecraft, author of The Call of Cthulhu and progenitor of the Cthulhu Mythos. It is a re-imagining of Lovecraft's novella The Shadow Over Innsmouth, also containing elements from the Call of Cthulhu role-playing game campaign "Escape from Innsmouth". Although the story diverges in several places and features a different protagonist, several levels in the game mirror passages from the novella. A major sub-plot of the game is also inspired by Lovecraft's novella The Shadow Out of Time.

At least two and possibly three additional Cthulhu Mythos games were planned by Headfirst Productions, including the direct sequel to Dark Corners titled Call of Cthulhu: Destiny's End. However, due to the bankruptcy and liquidation of Headfirst in 2006, these games were effectively canceled.

On September 6, 1915, Detective Jack Walters is called to investigate a decrepit manor house located in Boston, Massachusetts. The manor is inhabited by a small cult called the Fellowship of the Yith, led by one Victor Holt. Taking cover from an ensuing firefight, Jack finds himself separated from the police and trapped inside the mansion, with no option but to investigate. When the rest of the police finally break in, they find the cultists dead by mass suicide and Walters apparently insane. He is committed to Arkham Asylum, where he stays for several years.

More than six years later, Walters is released and returns to life as a private detective. He takes up a case at Innsmouth, a strange and xenophobic coastal town. After asking the rude locals about the incident, he stays a night at the local hotel, where he barely escapes an attempt to murder him. From that point forward, he is forced to sneak through the town, avoiding the murderous patrols of the townsfolk. He meets undercover agent Lucas Mackey, who tells him that the town is under government investigation. Jack finds the missing person and his girlfriend Ruth and they attempt to escape Innsmouth, but their car crashes, killing both of them.

Jack recovers from the incident and, following an interrogation, is taken in by the FBI under lead agent (and real-life FBI director) J. Edgar Hoover. On September 8, the FBI raid the Marsh Gold Refinery, where Jack is attacked by an ancient creature known as a Shoggoth and uncovers a Cthulhu shrine. The FBI finally manages to destroy the refinery through the use of explosives.

Following the refinery raid, a combined land-and-sea assault by the U.S. government forces attacks Innsmouth on September 9. The only thing that proved problematic was the headquarters of the Esoteric Order of Dagon, a religious organization centered on two undersea demigods and Cthulhu that holds the whole town under its grip. The building proved nigh-impossible to breach by the Coast Guard and the Marines, but Jack finds a way in through an old smuggling entrance (guarded by a star-spawn of Cthulhu) where he frees Agent Mackey and puts down the magical shield protecting the building. After discovering a secret chamber, he falls through the floor of a tunnel which leads into the sea.

Jack is rescued by the USS Urania, a Coast Guard cutter which is part of a group heading to Devil's Reef on September 10, following up on a lead provided by the FBI. A massive attack by Deep Ones and Father Dagon himself causes the Urania to sink, but Jack survives the encounter and finds himself on Devil's Reef. On Devil's Reef, Jack discovers old smuggling tunnels beneath the seabed and finds a tunnel leading to the underwater city of Y'ha-nthlei.

The city is found to be located below Devil's Reef and is the home of the Deep Ones and members of the Order. The Navy submarines plan to torpedo the city, but are stopped by a magical barrier protecting the city. The Temple of Dagon is the source of the barrier, but the entrance is sealed off in anticipation of invasion. Walters finds another way in through ancient tunnels feared by the Deep Ones. Here, Walters passes briefly through one of the ancient chasms where the flying polyps were imprisoned eons ago by the Great Race of Yith. Jack manages to defeat them with the help of an Yithian energy weapon he found earlier. Jack enters the Temple of Dagon and kills Mother Hydra (whose song is generating the barrier) with the help of some mind-controlled Deep Ones. With the barrier gone, the submarines destroy the city, and Jack manages to escape through a portal leading back to the Order's headquarters.

In the end, it is revealed that a Yithian swapped minds with Jack Walter's father during the moment of Jack's conception. In flesh, Jack Walters is human, but he inherited Yithian psychic powers, which is the reason for the cultists' interest in him. Confined back in the asylum, the insane Jack hangs himself, unable to handle the reality of himself and what he has witnessed. 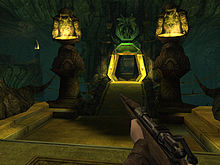 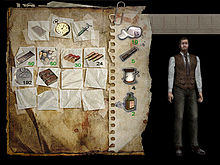 The game features no HUD interface. The player character's condition is relayed through the sound cues of his heartbeat and breathing, which become more pronounced when wounded, and color draining from the screen with loss of blood and strength. Specific injuries are also indicated visually and aurally. For example, a broken leg causes Jack to limp while making appropriate noises, and a broken arm makes aiming more difficult. The health system was designed as a more realistic take on character injury than other games of its genre in that different wounds and injuries require different remedies, such as a splint for a broken leg.

Jack loses sanity when he looks directly at upsetting aspects of the game world, such as mutilated bodies or precipitous drops, similar to the Nintendo Gamecube game Eternal Darkness: Sanity's Requiem. Sanity loss can lead to hallucinations and visions, which manifest as graphical anomalies, sound distortion, and changes in control sensitivity. Jack also begins to suffer from schizophrenia, hearing voices from various sources, such as his inner child pleading for him to go back to darker personalities. If he becomes too unsettled, permanent insanity or suicide cause a Game Over.

Initially, the gameplay mostly comprises unarmed escape and evasion, together with investigative exploration, although weapons and combat are introduced later on. As with most survival horror action/adventure games, ammunition is limited and must be conserved carefully for situations when it will really be indispensable, occasionally requiring the player to avoid combat even when armed. The game as a whole is heavily scripted and very linear, with only one path through the chapters from start to finish, in contrast with some earlier survival horror games such as the original Alone in the Dark (which is also based on the Mythos). The areas marked with the Elder Signs serve as sanctuaries against the enemies and as save points.

Most of the weapons in the game have real-life counterparts, including a Smith & Wesson M1917, a Colt 1911, a double-barreled shotgun, an M1903 Springfield and an M1921 Thompson.[2] The only exception is a Yithian directed-energy weapon. The game does not have an artificial on-screen targeting reticle. Instead, the player must aim through the iron sights on the weapons themselves. Sustained aiming tires the character and drops accuracy. The player character can melee attack with a gun if all ammunition for it has been used up. The shooting system is unique in that fired rounds go exactly where the barrel is pointing. For example, if the player readies a weapon and pulls the trigger before the character animation has finished, the round may fly towards the sky if that's where the barrel was pointing when the shot was fired.

The game contains a number of bugs, which have never been officially patched. For example, during one mission the player needs to fire a cannon at enemy wizards. On some Windows systems the enemies are not rendered by the game at all, making it very difficult for the player to hit them. There is an unofficial patch available that fixes some bugs and lowers the game's overall difficulty level. The bugs are generally intermittent, and restoring from an earlier saved game can be enough to get past them.

The game has been in development for at least six years, and the development can be traced back to August 1999 and this Usenet discussion where the Mythos fans contributed ideas for the game to Headfirst's artist designer Andrew Brazier. This and other feedback was later used to create the game.[3]

The first screenshots were shown in December 1999, and the game, originally planned for the PC and PlayStation 2, was scheduled for release in the third quarter of 2001.[4] Before E3 2001 the game was stated to be "70 percent complete", but it ended up being repeatedly delayed.[5] In late 2002 the game's original publisher Fishtank Interactive was taken over by JoWood, which had no interest in the title. The developers then signed a deal with Bethesda to release the game for the PC and Xbox,[6] and the development of the PS2 version was cancelled.

Headfirst Productions originally intended for a much larger, non-linear RPG-type storyline to be fitted within the game, including more characters and locations, as well as a co-op system for up to four players, which would have enabled players to pick one of four characters and carry out their own investigation independently or team up with the others.[7][8] A multiplayer version of the game would have allowed for online deathmatch battles in specifically designed levels. A lot of other features, such as high environment interactivity,[9] were also scrapped due to budget and time constraints and problems with the level design.

Player weapons originally conceived but ultimately removed from the game include a wooden club with a nail protruding from one end,[10] a wooden police baton, a meat cleaver (the cleaver can still be seen in the Gilman hotel, however Jack refuses to touch it as it is covered in blood), a fishing harpoon, a tomahawk axe, a metal bar (the bar survived to be used as an item in the game), a poison-tipped Deep One spear, dynamite sticks, hand grenades, a flamethrower (which does appear as a non-acquirable weapon in the final game), a Luger P-08 pistol, a Mauser C96 broomhandle pistol (removed because it was too similar to the two handguns that made it into the game), a single-barrel Winchester Model 1912 12-gauge pump action shotgun[11][12] (some enemies carry this shotgun, but the player cannot use it), a 4" Colt Python .357 Magnum revolver, and a stationary M2 Browning machine gun (it is seen in the Marsh Refinery level but cannot be used). The Springfield rifle was originally going to be equipped with a scope and bayonet.

Headfirst initially used the game engine NDL NetImmerse for rendering graphics combined with the Havok physics engine but later developed its own engine.[13] The game's protagonist Jack Walters went through up to eight different phases before a final look was designed by Tim Appleton. The title was eventually released in October 2005 for Xbox and in March 2006 for the PC.

The game was well received overall. On Metacritic, the PC version of the game has an average critic score of 76/100 ("Generally favorable reviews"), with 9 positive and 8 mixed reviews.[14] GameRankings averages the review scores of the Xbox version to 78%.[15]