Come on Over Baby (All I Want Is You)

Come on Over Baby (All I Want Is You) 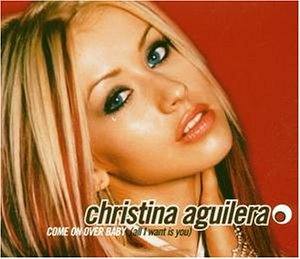 "Come on Over Baby (All I Want Is You)" is a song co-written by American pop singer , Paul Rein, Johan Aberg, Celebrity Status (C. Blackmon, R. Cham, E. Dawkins), , and for Aguilera's debut album "Christina Aguilera" (1999).It was co-produced by Fair and Celebrity Status.

The song is about Christina eyeing a prospective boyfriend and declaring "come on over baby ... 'cause all I want is you". It was released as the album's fourth single in the summer of 2000 (see ), and was the first single on which Aguilera had been given significant creative control. It peaked at number one in the U.S., and was very successful elsewhere as well.It became her second most successful single peaking almost everywhere.

This was also the first time in which Aguilera was allowed to toy with her image in the music video for the song, kicking off a long evolution of looks the singer would end up doing over the span of her career. The brand new look, which included more revealing outfits and streaks of red and blue in her hair, was also used for her debut Spanish language album "" and also for her first headlining tour in the Summer of 2000.

Like "What a Girl Wants" (the second single from "Christina Aguilera"), a new ed and re-recorded version of "Come on Over Baby (All I Want Is You)" was released as a single rather than the original album version. The album version, which had been known simply as "Come on Over (All I Want Is You)", was seen as unsuitable for single release. Since the single had been originally produced and written by Paul Rein and Johan Aberg, the pair were given the first opportunity to change the song. Aguilera and Ron Fair (her mentor) were not impressed with their efforts, and turned to the producing team known only as Celebrity Status.

With Celebrity Status and Ron Fair producing, "Come on Over (All I Want Is You)" (the album version) was transformed into "Come on Over Baby (All I Want Is You)" with a more pop oriented, hip hop-influenced production (as opposed to the original piano rich production). New and more sexual lyrics, a for the song's b-section, a bridge (the original song did not have a bridge), a "rap" from Aguilera, a new mid-song dance breakdown, and more powerful vocals by Aguilera were also added. (The song also features limited new elements from Guy Roche and Shelly Peiken.)

As the original album version does not have a bridge, it had previously been performed live with an interlude that sampled the disco song "" by . When the original songwriters of "Got to Be Real" were contacted for permission to sample their song, they denied clearance. Instead, Aguilera's team added a part to the song referencing "What a Girl Wants":

This rap (and also a section in the second verse in which Aguilera discusses sexuality and a man's hands on her body) caused to ban the song initially, as it had done to "" (the album's first single). The original album version of the song, "Come on Over (All I Want Is You)", was allowed to be played, and an edited version of "Come on Over Baby" (which removed the second verse and the rap) was also given some airplay. Reportedly, the edited single version received more airplay on the station than the album version of the song.

"Come on Over Baby (All I Want Is You)" became Aguilera's third number-one hit on the U.S. , and the RIAA eventually certified the single gold. It spent four weeks at the top, from to ; it replaced "Music" by Madonna, and was replaced by Creed's "". It spent twenty-one weeks on the Hot 100, and ranked thirty-eight on the Hot 100's 2000 year-end charts. The Spanish-language version of the single, "Ven Conmigo (Solamente Tú)",sticking to the original arrangement, was also a huge success, becoming Aguilera's first number-one single on Billboard's chart, and reaching #1 as well in .

After receiving a strong push from the record label and Aguilera herself, the single became a big hit for Aguilera, with many considering it a 'comeback' due to the slight underperformance of her previous single "I Turn To You". Not only did the single hit #1 on the Billboard Hot 100 and had stronger airplay than the pervious single, but the video also became Aguilera's most popular video to date, becoming a huge #1 hit on TRL and receiving strong airplay on MTV, VH1, and even Disney & Nickeoldeon.

"Come on Over Baby (All I Want Is You)" reached the top ten in the UK, Japan and Australia and the top twenty in Canada, but was less successful in Continental Europe, reaching the top forty in most markets. This single sold over 4,817,000 million copies worldwide.