Infobox Song
Name = I Turn to You 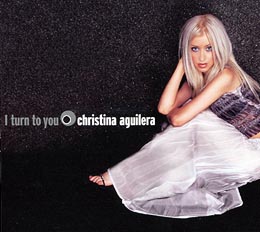 "I Turn to You" is a pop/R&B song written by in . The original version of the song was recorded that year by R&B quartet for the soundtrack album to the film "". Three years later, American pop singer recorded a cover version, produced by , for her debut album, "Christina Aguilera". Released in the spring of as the album's third single, the single peaked at #3 on the Billboard Hot 100 for 4 weeks, becoming Aguilera's third Top 10 hit. The single also peaked at #19 in the UK and #40 in Australia.

The lyrics of "I Turn to You" are an ode from the narrator to a person who helps them find the proverbial light in the rain when she is lost or losing ground. It is often felt that the single is written with the theme of thanking a al figure (as evidenced by the produced for Aguilera's version.) However, the song's lyrics are ambiguous enough to where the lyrics can apply to a lover, a friend, or another family member.

The song was re-written in Spanish, and titled "Por Siempre Tú" (English: "Forever You"), for Aguilera's first Spanish-language album, "".

Following the number-one successes of Aguilera's two previous singles, "" and "What a Girl Wants", "I Turn to You" peaked at number three on the "Billboard" Hot 100 and number five on the "Billboard" chart. Internationally, the same trend of the single performing weaker on the charts than her previous two was shown as the song failed to even reach the top-forty in most countries. The single was a flop outside the US and couldn't even enter in many European Top20 charts.