Danny Flynn (born August 4, 1964), is an established and D&AD award winning designer and printer in both the fine art and commercial fields, specialising in limited edition book design and illustration, and letterpress and screen-printing disciplines. His success in the field of design, typography and printing led to him being commissioned to work in post-production design for the opening title sequence of the Ridley Scott/Russell Crowe Hollywood film Gladiator.[1]

Born and educated in Bradford, Flynn qualified from Bradford College Art School (where he was taught life drawing in the same class where local student David Hockney was once also tutored) with a diploma in graphic design and advertising. Flynn went on to study at Hounslow Borough College, London, studying graphic design and typography. After first working in advertising, he further developed his interest in traditional printing methods and later used his acquired skills to win prestigious design and print awards.

As well as successful career based on his solo work, Flynn also has a history
of productive partnerships with other established artists from other disciplines,
such as writers, book binders, fashion designers and photographers, among them,
Eri Funazaki, Flora McLean (House Of Flora) and Derek Ridgers.

His series of highly detailed and finely bound books created in partnership with award winning Japanese bookbinder, Eri Funazaki,[2][3] are Included in private and public collections such as the Tate Gallery, The Yale Collection of British Art, The School of the Art Institute of Chicago, Joan Flasch Artists’ Book Collection, and The Miniature Book Collection, New York.

In 2010, Art@Ketchum Pleon announced an exhibition of handmade book works by Funazaki and Flynn. Each book had been printed by hand using individual metal type (known as letterpress) and embellished with blind and gold tooling. All of the books were handbound using “design binding,” a mix of traditional and modern bookbinding methods. The alphabet prints in the exhibition were taken from one of the books, 28 Characters. Also shown were new letterpress and screen-printed work and a series of bronze sculptures depicting 'a little man struggling with his existence'.

In an interview with the gallery, Flynn said of the work, “It is more an exercise in unlocking each psychological narrative that Eri has already suggested pictorially.”

His work for the designer Flora McLean at House Of Flora saw Flynn laser-cutting typography onto rubber for garments and accessories for a piece entitled Dress No.2, which was rated a great success at the 2009 London Fashion Week. The designs were featured in Vogue and a film of the work, Letterhead, can be seen on the Vogue website.[6] An interview with Flynn for Print Week described the event:[7]

"While rapper Kanye West was spotted living it up at a Luella show, and Sienna Miller hogged the headlines when she unveiled her own line of clothing, one person that escaped the glare of the paparazzi at London Fashion Week, but managed to catch the attention of fashionistas was Flora McLean, head designer at House of Flora.

"With the help of Danny Flynn of Astonish Me Press, McLean created fashion accessories and jewelery inspired by letterpress printing – with a twist! The designs could also be used to print with and came with their own inking pots so the wearer could quite literally print on the go. Rubber embossed belts turned into rollers along with laser cut roller handbags and cuffs bearing laser-cut text. I caught up with printer Danny Flynn following a lecture that he gave at the London College of Communication last week. Subjects up for discussion included his fascination with a dying art form, his Stella Artois commissions and the work that he undertook on the Hollywood blockbuster Gladiator."[8]

"This film is another collaboration with Ponyboy films, promoting the House of Flora autumn winter collection 2009. There are a series of rubber and felt pieces with debossed type . Much of the decoration on the hats and jewelery, belts and bags are usable printing tools. This work was designed alongside typographer and printer Danny Flynn. Dress no 2 features in the film, a navy wool gabardine, hand finished naval evening dress with detachable sleeves. This film was shown on Showstudio and has been chosen to be part of the Diane Pernet film festival at the Pompidou Centre in Paris in October 2009."

Danny Flynn’s history of collaborating with other artists continued into 2010 with a series of screen-prints using the rock star and film maker portraits of well known portrait photographer Derek Ridgers and the text of writer, Marcus Georgio. Unusually, the prints used various everyday powders - sugar, salt, custard and raspberry powder, etc. - and the exhibition, Every Bodies Enemies was held at Ketchum Pleon as part of their Art@Ketchum Pleon project.[11][12]

"Every Bodies Enemies is Flynn's interpretation of a dozen of Ridgers' celebrity photographs, including Kylie Minogue, Dennis Hopper, David Lynch, Nick Cave, John Lee Hooker, Henry Rollins, Keith Richards, Frank Zappa, and Elvis Costello among others, producing a series of powerful screen prints juxtaposing image and typography to achieve a stunning and poignant effect aimed at revealing the mystery of the celebrity's look, pose and thoughts at the moment when the picture was taken. Any spectator, therefore, feels like a voyeur gazing through a keyhole into a secret and fascinating celebrity world. Some of the prints employ a unique technique which enables the application of different coatings, such as raspberry custard powder (David Lynch), and sugar (Nick Cave)."[13]

In an interview with Press Week, Flynn stated:

"I am also in the process of producing screen prints of Derek Ridgers photographs. Ridgers chronicled punk and the 80s. I’m experimenting with different powders, and salts. So I’m producing a photograph of Kylie Minogue using milk, as well as metal powders. This is done by putting the powders on the screenprint while it’s still wet."

Though print and design are Flynn’s core disciplines, he has also worked in areas as diverse fashion design, mural design and painting, graffiti design, and also ice sculpture. He captained the Great British ice sculpting team three times,[14] during 2002 and 2004, in The International Snow Sculpture Championship and The International Snowfest Sculpting Competition in the US and Canada, respectively - being awarded the 1st prize in 2002 Snowfest competition in Ontario for the sculpture entitled 'Urgh'.

With Eri Funazaki. Work title: 'Life in a Box'.
Winner of the Complete Book Category, The Society of Bookbinders Biennial Bookbinding Competition and winner of The Portnal Award.
http://www.societyofbookbinders.com/events/competition/competition_2001/comp_2001_complete.html 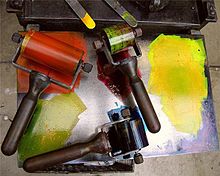 He has also lectured in both the UK and Germany for, among others, The Children’s Trust Charity, Central Saint Martins College of Art and Design, The Art Workers Guild and The International Conference on Technology in Berlin.

Danny Flynn’s work as a designer, writer, and letterpress and screenprinter has been exhibited internationally since 1995 from America to Japan, in cities such as London, New York, Tokyo and San Francisco, and in galleries such as The Tate, The Saatchi Gallery, The Barbican Centre, MoDA, Chaucer Centre and Ketchum Pleon. Flynn’s work has also been exhibited in public spaces such as Waterstones and Selfridges, and also as a series of letterpress poetry posters on the London Underground. 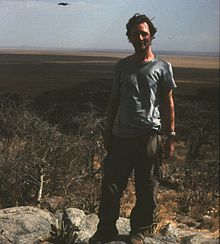