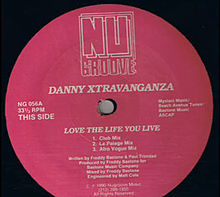 Label from 12" single of 'Love the Life You Live' by Danny Xtravaganza; produced by Freddy Bastone for NuGroove records, 1990.

Danni Xtravaganza (sometimes spelled 'Danny' and/or 'Extravaganza') was a founding member of the House of Xtravaganza (est. 1982),[1] the first primarily Latino house in the underground Harlem ball culture. Born July 14, 1961 in Puerto Rico, Daniel Camacho was raised in Brooklyn, New York by his mother until he left home at 16. Consistent with the tradition of ball culture, in 1982 Danni took the House name as his surname. As a teenager he studied ballroom dancing, the foundation of the elegant Vogue (dance) style he performed on the ballroom runways. In ball culture where House members compete in various categories, Danni Xtravaganza was widely respected for his unique ability to compete in categories as diverse as Vogue (dance), Runway (modeling), Punk Rock (fashion), and Butch Queen in Drags (a man impersonating a woman).

In 1990 Danni appeared in the popular Jenny Livingston documentary 'Paris Is Burning (film)'[2] and recorded 'Love the Life You Live', produced by Freddy Bastone for Nu Groove records.

'Strictly Ballroom: After Decades in the Shadow of Vogue Dancing and Culture, Ballroom Beats Come to the Fore', Marke B, xlr8r.com