The Danish Royal Family inhabit a range of residences around Denmark. Historically all the residences of the royal family were privately owned. With the introduction of the new Constitution in 1849, some of the residences were claimed as property of the "Kingdom of Denmark". Some of the palaces are still privately owned by the Queen or other members of the Royal Family. The Palaces and Properties Agency (the Danish equivalent of the Historic Royal Palaces Agency) is responsible for the management and upkeep of some of the royal palaces and gardens.[1][2]

As with the Residences of the British Royal Family the Danish Royal Family traditionally occupy different royal residences during different seasons of the year. In summer, Queen Margarethe and Prince Henrik reside at Marselisborg Palace or Graasten Palace. In the winter, they reside at Amalienborg, whereas their residence during spring and autumn is Fredensborg Palace. Sometimes members of the royal couple spend time on the Royal Yacht Dannebrog, especially when on official visits overseas and on summer cruises in Danish waters. 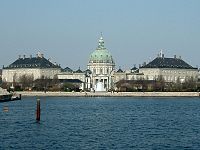 Amalienborg seen from the Copenhagen Operahouse. The domed structure in the centre is the Frederik's Church, and not part of the palace.
Main article: Amalienborg Palace

Amalienborg Palace is the winter home of the monarch, and is located in Copenhagen, Denmark. It consists of four identical classicizing palace façades with rococo interiors around an octagonal courtyard; in the centre of the square is a monumental equestrian statue of Amalienborg's founder, King Frederik V.

Amalienborg was originally built for four noble families; however, when Christiansborg Palace burnt down on 26 February 1794, the royal family bought the palaces and moved in. Over the years various kings and their families have resided in the four different palaces.[3][4] 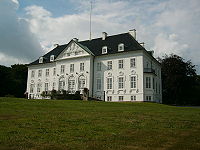 Marselisborg Palace is the summer residence of the royal family in Aarhus. Historically, the Palace was the property of the Marselis dynasty, its namesake. Marselisborg became a royal residence when Crown Prince Christian (later Christian X) and his consort Princess Alexandrine. They were given the Palace as a wedding present by the people of Denmark. As such the palace is the property of the Kingdom of Denmark, and will remain in possession of all future monarchs of Denmark. The royal couple used it as their summer residence. The building was rebuilt by the Danish architect Hack Kampmann. The present Queen Margrethe II was given the palace by her father, King Frederick IX of Denmark in 1967.[7]

Gråsten Palace is the second summer residence of the Danish royal family. It is located in Gråsten in the Jutland region of southern Denmark. It is within ideal proximity to the Legoland amusement park that the royal children enjoy every year. The main house has a modern, all-white facade, with Venetian doors opening onto sweeping, manicured lawns and gravel walkways. The grounds include a huge stables court.[8][9]

The Eremitage Palace or Eremitage Hunting Lodge (Danish: Eremitageslottet or Eremitagen) is located in Dyrehaven north of Copenhagen, Denmark. The palace was built by architect Lauritz de Thurah in Baroque style from 1734 to 1736 for Christian VI of Denmark in order to host royal banquets during royal hunts in Dyrehaven.

Never intended for residence, the Eremitage Palace was built as a setting for hosting royal banquets during hunts in Dyrehaven, which surrounds the palace. It originally featured a hoisting apparatus able to hoist the table from the basement to the dining room, allowing the King and his guests to dine without any waiters present, or "en ermitage" (in solitude), hence the name of the castle.[10] The apparatus was removed in the late 18th century as it was causing endless mechanical problems,[11] and no signs of it remain.[12] The previous castle on the site, the Hubertus chalet, had a similar apparatus and was nicknamed Heremitagen for the same reason.[13] 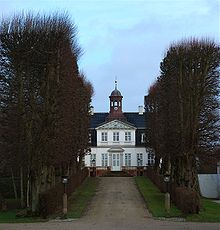 Sorgenfri was the preferred summer residence of King Christian X and his wife Queen Alexandrine. Both of Alexandrine's children Frederik and his brother, Knud, were born there. Both Knud and his wife Caroline-Mathilde lived at Sorgenfri Palace until their respective deaths in 1976 and 1995.

Today the palace is closed to the public but the palace gardens are accessible when the monarch is not in residence. Count Christian of Rosenborg (a younger son of Prince Knud) and his wife Countess Anne-Dorte presently reside in the palace.[14][15]

Château de Cayx is a royal residence of the Danish monarch located in the wine district of Cahors in southern France.

The château was first fortified during the fourteenth century. Since then it has been rebuilt and renovated several times. The de Pompignan dynasty built the extensive wine cellars under the château. In an unlucky turn of events the vine pest devastated the vineyards during the late nineteenth century. The de Pompignan dynasty decided to emigrate to Indo-China. They did not return to Europe until 1955. In 1965 the dynasty's heir Henri Marie Jean André de Laborde de Monpezat married Princess Margrethe, then heir apparent to the Danish throne, becoming Prince Consort of Denmark.

The royal couple purchased the château and the estate in 1974. Since then they have renovated it extensively. According to the official website of the Danish monarchy, the residence has become a "relaxed setting for reunions of the entire Danish Royal Family and their French relatives".[16]

Originally called Møgeltønderhus (Møgeltønder House) the mansion was the property of the Roman Catholic Bishops of Ribe. It served as protection against the Frisians in the south, and guarded the waterway via Vidå to Tønder. During the Reformation in Denmark the mansion was confiscated from the church by the Danish crown. Count Hans von Schack, a Schleswig nobleman and soldier was given Møgeltønderhus as a token of King Frederick III of Denmark's gratitude for his military achievements in the Northern Wars. Von Schack demolished most of the mansion in 1661, building the more impressive, baroque style "Schackenborg Castle".

Schackenborg and the extensive estate was transferred to Prince Joachim (the younger son of Queen Margrethe II of Denmark). The castle and the surrounding park are not open to the general public, however guided tours which take place in the gardens are sometimes available during the summer.[16]