As of October, 2011, there are three national parks in Denmark, another one in Greenland, which is part of the Kingdom of Denmark. 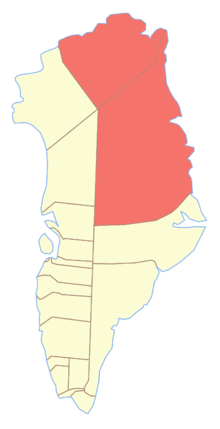 Greenland has its own National Park since 1974. It stretches over the northern three fifths of Greenland's east coast and, since its expansion in 1988, the eastern two thirds of Greenland's north coast. From these coasts, the park's limits go inland until they meet in the island's centre, so that the park covers the island's entire, almost uninhabited north-eastern quarter (see map of Greenland's protected areas). For more information, see Northeast Greenland National Park. 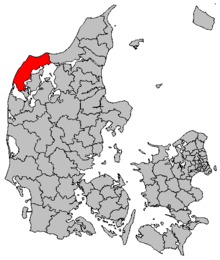 Thisted Municipality is shown in red. Thy National Park stretches along its west coast.

The first national park in Denmark is Thy National Park (Danish: Nationalpark Thy), established in 2008. It is located in Thisted Municipality, Nordjylland. The park is a narrow stretch of land running down the North Jutlandic Island's west coast from Hanstholm southward to Agger Tange, excluding Hanstholm, Klitmøller, Nørre Vorupør, Stenbjerg and Agger. Thy National Park is named after Thy, an area that includes not only today's national park but also adjacent land further east. The park has dunes, heath, forests and grassland and also covers several small lakes and a small part of the Limfjord, which is the fjord that separates the North Jutlandic Island from the Cimbrian Peninsula.

Another two areas in mainland Denmark were selected on 17 January 2008 to become national parks; see the table below for details; they are supposed to become National Parks during the year 2011.

Like Greenland, the Faroe Islands are a part of the Kingdom of Denmark that manages its own affairs. As of 2008, the Faroes have not set aside any areas as national parks.