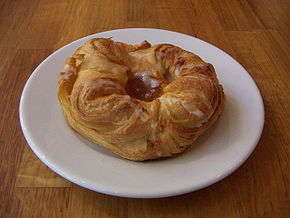 Danish pastry is a sweet pastry which has become a specialty of Denmark and neighbouring Scandinavian countries and is popular throughout the industrialized world, although the form it takes can differ significantly from country to country. They are referred to as facturas in some Spanish speaking countries.

Danish pastry is, like the croissant, said to originate from Vienna and is called wienerbrød (Danish pronunciation: [ˈʋiːˀnɔˌbʁœːˀð], lit. "Viennese bread", corresponding to the French Viennoiserie) in Denmark, Finland, Iceland, the Faroe Islands, Norway and Sweden. In Vienna, danish pastry ("Viennese bread") is referred to as "Plundergebäck" or "Golatschen", and its origin may well be the Turkish baklava,[1] like the Strudel. Both the croissant and Danish are laminated doughs, and as such are categorized as Viennoiserie products.

A Pecan and Maple Danish

The ingredients include flour, yeast, milk, eggs, and generous amounts of butter. In industrial production, other fats are also commonly used, such as hydrogenated sunflower oil (known as "pastry fat" in the UK). A yeast dough is rolled out thinly, coated with butter, and then folded into numerous layers. If necessary, the dough is chilled to ease handling. The rolling, buttering, folding, and chilling is repeated several times to create a dough which is fluffy, buttery and flaky. However, not all danishes are made this way.

The Danish as consumed in Denmark can be topped with chocolate, sugar or icing, and may be stuffed with either jam, marzipan or custard. Shapes are numerous, including circles with filling in the middle (known as "Spandauer's"), figure-eights, spirals (known as snails), and the pretzel-like kringles.

In the UK, various ingredients such as jam, custard, apricots, raisins, flaked almonds, pecans or caramelized toffee are placed on or within sections of divided dough, which is then baked. Cardamom is often added to increase the aromatic sense of sweetness. 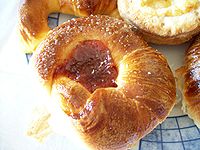 The origin of the Danish is ascribed by the Danish Confectioners, Bakers and Chocolatemakers Association to a strike amongst the bakery workers in Danish bakeries in 1850. The strike forced Danish bakery owners to hire foreign workpower. Among these were several Austrian bakers, who were unfamiliar with the Danish baking recipes, and therefore baked pastries of their native homeland recipes. Amongst these Austrian pastries were Plundergebäck, which became quite popular in Denmark. Later this recipe was changed by Danish bakers, increasing the amount of fat (by adding more egg) which resulted in what is today known as the Danish.[3] 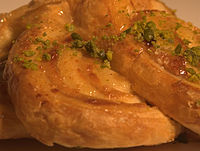 Lauritz C. Klitteng, of Læsø, Denmark, popularized "Danish pastry" in the United States in the years 1915-1920. The Danish was, according to Klitteng, the dish that he baked for the wedding of United States President Woodrow Wilson in December 1915. Klitteng toured the world to promote his product, and he was featured in such 1920 periodicals as the National Baker, the Bakers' Helper, and the Bakers Weekly. Klitteng opened a short-lived Danish Culinary Studio at 146 Fifth Avenue in New York City[4]

"At one point during his career Mr. Gertner befriended a Danish baker who convinced him that Danish pastry might be well received in New York. Mr. Gertner began serving the pastry in his restaurant and it immediately was a success.

During the Jyllands-Posten Muhammad cartoons controversy in 2006, several religious Iranian groups advocated changing the name of highly popular Danish pastry (Shriniye Danmarki), given its name association with the source country of the offending cartoons.[5] The Iranian confectioner's union designated "Roses of the Prophet Muhammad" as the new name for Danish pastries made in the country as of 15 February 2006, although compliance with the proposed name in bakeries was mixed and short-lived.[5] Related to this, many protesters in several Muslim countries, angered by the pictures of Muhammad, boycotted Danish goods. "Roses of Muhammad" (Persian: گل محمدی "gole mohammadi", literally: Muhammed flower) is a traditional Persian synonym for variety of pink rose flowering shrub.