Danielewicz vel Danilewicz[1] of Ostoja coat of arms[2] was a noble family name in Lithuania and in the Polish Lithuanian Commonwealth. On the political scen Danielewicz supported the Clan of Ostoja expansion in 14th century and in Lithuania was one of the closest families related to the Pac family supporting their way to the suprimacy in Grand Duchy of Lithuania at the end of 17th century. 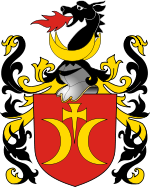 Battle of Grunwald by Jan Matejko (1878)

This aristocratic family origin from Lithuania, mainly among officials in the districts of Vilnius, Ashmyany, Trakai and Vilkmergė. The family name goes back to "Daniel", who participated in the Polish–Lithuanian–Teutonic War (1409 to 1413) including the Battle of Grunwald year 1410. After the campaign, the family were settled down and was given properties around Vilnius area using the Polish Ostoja coat of arms, taking part of the expansion of the powerful Clan of Ostoja. Daniel had two sons and one daughter. Of them Dawid was the first to use name Danielewicz, holding different offices including the position as Judge of Vilnius. In 1530 Michal Danielewicz was in possession of 10 villages with different economic buildings on the property. His grandson, Jan Karzimierz Danielewicz was deputy to the Sejm from the Vilnius district.[3]

In coalition with Pac

The Danielewicz family cooperated through many centuries with the Pac family. In 1653 the property of Bohdanow named after Prince Bohdan Sapieha[4] in Belarus were passed to Barbara, daughter of Prince Karzimierz Sapieha. Barbara's daughter Tekla Wollowicz then married Piotr Michal Pac and the property passed to the Pac family. Since Piotr Michal Pac had no children of his own, he adopted Michal Danielewicz,(Starosta of Plotelsk, Inspector of the Hungarian boarder) into the Pac family as he was the son of his sister Katarzyna Pac, daughter of Piotr Pac, Voivode of Trakai. As result of that, the Bohdanow property among others was passed from the Pac family to Danielewicz.[5]

Danielewicz of Ostoja coat of arms owned several big properties in Lithuania, Prussia, Belarus and Volyn, Ukraine and held high ranking offices in the Polish-Lithuanian Commonwealth, mostly in the Grand Duchy of Lithuania. Through the centuries Danielewicz was highly respected for and their knowledge in jurisdiction [6] and therefore was often granted the position of Starosta, (County Mayor), County Judge as they also many times represented their districts and provinces in the Sejm, the Parliament of the Commonwealth. Danielewicz raised in great power and wealth (on local level) during the time when the Pac family took the control of the Grand Duchy if Lithuania. 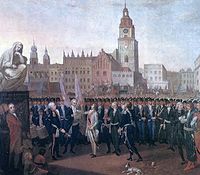 The dominans of Pac family was passed to the Sapieha family because Pac due to lack of heirs. In the middle of 19th century last of the Pac family, Ludwik Michal Pac lost all great properties as they were confiscated by the Russian side for his involvement in November Uprising and his participation in Napoleonic wars against Russian side.

During the Partitions of Poland or Partitions of the Polish–Lithuanian Commonwealth 1772-1918, Danielewicz's participated in many upraising actions witch cause Russian side to confiscate most of the family properties. As the family did not support foreging forces in the Commonwealth and was in opposition, no offices was given to the family anymore. In the end o 18th century part of the family moved to Preussen where they joined Prussian army as officers in hope to fight Russian side that was holding control of the east part of the Commonwealth. After the Napoleonic wars Marcin Danielewicz received the Order of the White Eagle for his efforts in the fight for the independence of the Commonwealth. Jan Danielewicz died on the fields of Olszynka Grochowska in November Uprising, Piotr Danielewicz participated in 1863 Upraising in Vilnius (the January Uprising) and after the uprising failed was sent to Siberia from witch he never come back.

As the consequence of the January Uprising, 80.000 people was deported according to professor Norman Davis[7] witch is the largest single deportation in Russian history. "Whole villages and towns were burned down; all activities were suspended and the nobility, szlachta was ruined by confiscation and exorbitant taxes". Although Russia tried to rase polish heritage with military regime to finally end all of the uprisings and problems they faced, in 1905, 41 years after Russian crushing of the uprising, the next generation of Poles rose once again in a new one. Among them, Karol Ostoja Danielewicz was deported for teaching Youth the polish language, preserving polish culture and traditions which was forbidden by the Russian authorities.

At the end of 19th century, the family was divided into three lines; the Prussian, Lithuanian-Belarus and Volhynia line. In total 26 males[8] was found registered nobility of the Ostoja Clan. The Volhynia line of Ostoja-Danielewicz was excluded from Russian records after taking part in upraising.

All above are noble families of Danielewicz vel Danilewicz being part of different Clans and not family related with each other. In the end of 19th and beginning of 20th centuries under the partition time, many citizens emigrated from east part of former Commonwealth and moved to Poland and other countries including the United States. Those families often changed their names as they wished, applying noble names like Danielewicz without any restrictions and so there are few Danielewicz families that does not origin from any of the Clans mentioned. At least one family is of judish origin.

Danielewicz Bujwid , royal family, they came from Poland in two of their own vessels, to U.S. (Philadelphia,PA) with a lot of servants and security personnel.[original research?]