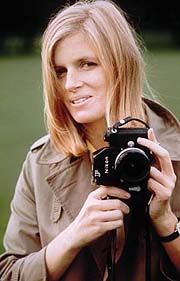 
Linda Louise McCartney (née Eastman, formerly See, September 24, 1941 – April 17, 1998) was an American , and . She married of on March 12, 1969. The McCartneys had four children together: Heather Louise (from her previous marriage, whom Paul McCartney adopted in 1969), Mary Anna, Stella Nina and James Louis. Linda became Lady McCartney when her husband was knighted in 1997.

She authored several cookbooks, became a business entrepreneur (starting the Linda McCartney Foods company) and was a professional photographer, publishing "Linda McCartney's Sixties: Portrait of an Era". She was a member of Wings.

McCartney was diagnosed with in 1995, and died at the age of 56 on April 17, 1998 at the McCartney family ranch in . She left her entire estate to her husband through a Qualified Domestic Trust Fund.

McCartney started work as a receptionist for the "Town & Country" magazine, and was the only unofficial photographer on board the "SS Sea Panther" yacht on the who was allowed to take photographs of during a record promotion party.

Linda made an uncredited vocal contribution to the Beatles' title song of "Let It Be" in January 1969.

In 1977, a single entitled "Seaside Woman" was released by an obscure band called , on .

McCartney and her husband shared an Oscar nomination for the song "Live and Let Die," which they co-wrote. Linda McCartney's album "", which included "Seaside Woman," was released posthumously in 1998.

McCartney introduced her husband to in 1975, and promoted a vegetarian diet through her cookbooks: "Linda McCartney’s Home Cooking" (1989) "Linda’s Kitchen" and "Simple and Inspiring Recipes for Meatless Meals". She explained her change to vegetarianism by saying that she did not "eat anything with a face", and if " had glass walls the whole world would be vegetarian".

McCartney was a strong advocate for , and lent her support to many organizations like (People For The Ethical Treatment of Animals) as well as The Council For The Protection of Rural England, , and was a patron of the . Before her death, she narrated a TV advertisement for PETA, in which she said: "Have you ever seen a gasping for breath when you take it out of the water? They’re saying, ‘Thanks a lot for killing me. It feels great, you know.’ No! It hurts!"

McCartney was arrested in for possession of in 1975, although all charges were later dropped.

McCartney was diagnosed with breast cancer in 1995, and her condition soon grew worse as it spread to her . [cite news |last=Saffian, Sarah |title=Untimely deaths haunt extended Beatles family | work=US Magazine Company |page=37 |date=December 17, 2001 | accessdate=2006-11-10 ] Paul's last words to her were: "You're up on your beautiful stallion. It's a fine spring day. We're riding through the woods. The bluebells are all out, and the sky is clear-blue". Linda McCartney died at age 56 on April 17, 1998, at the McCartney family ranch in Tucson, Arizona.

Talking later about the medication used to treat her breast cancer, Paul said: "If a drug has got to be used on humans then legally it has to be finally tested on an animal ... This was difficult for Linda when she was undergoing her treatment."

"Wide Prairie", a six-minute cartoon film by Linda McCartney and director Oscar Grillo, was premièred at the on August 19, 1998. It was shown before the British première of "", starring .