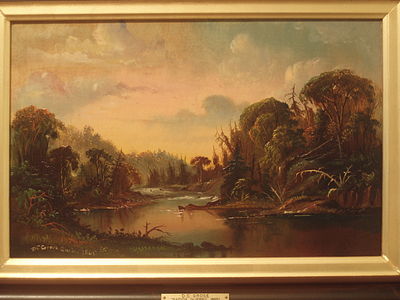 Daniel Charles Grose was born ca. 1838. His parents’ names are not known. Several sources indicate his Uncle was English antiquary Francis Grose, however, this assertion appears to be based on some confusion over Francis Grose’s nephew Daniel Grose (1766–1838), author of The Antiquities of Ireland, A Supplement to Francis Grose. It is possible that Daniel Charles is related to this family, but at the moment, no documentary evidence exists.

Very little is known of Grose’s early years. He may have migrated to Canada or directly to the United States, though the proliferation of his early work in Canadian museums and galleries suggests the former. Most advertisements of his work call him an American or Canadian artist.

Grose’s work indicates an affinity to the second generation of the Hudson River School (ca 1848–1900). The Samuel Dorksy Museum of Art,[1] lists two of his works as examples of the Hudson school. Most of Grose’s exeunt work depicts pastoral landscapes, or romantic scenes with ruins. The earliest known Grose works are dated 1865 and consist of a series of landscapes in the province of Quebec.

On May 25, 1881, in Washington, D.C., Grose married Estelle Harriet Smith (1863–1914), also an artist.[2] She was the daughter of Captain Dwight Hayden Smith and his wife Luana Elizabeth Smith of Alexandria, Virginia. Between 1881 and 1884 Grose and Harriet took a trip around the world.

Grose was a member of and exhibited at the Brooklyn Art Association.

Grose died in Alexandria at his mother-in-law's house (Mrs. H Dwight Smith) on February 24, 1900.[3] His funeral was held the next day in Washington at his former residence.