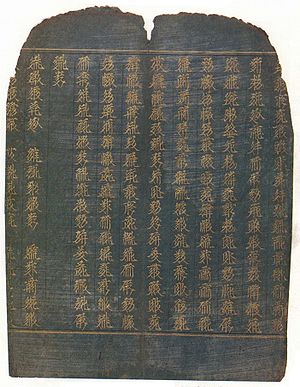 The Tangut identified with the state of Western Xia were traditionally thought of as a Qiangic-speaking people who moved to northwestern China sometime before the 10th century CE. Recent research indicated that the term "Tangut" most likely derives from Chinese Donghu; "-t" in the Mongolian language means "people".[1][2] Whereas "Donghu" was a Chinese transcription, its Mongolian reference was "Tünghu".[3]

Tangut is typically regarded by Chinese scholars to represent the "Qiang" of the "Dangxiang" (Chinese: 党项; pinyin: Dǎngxiàng). Historically the "Qiang" was a summary term for the multiple ethnic groups who lived in northwest China and included the Tibetans, Han, and a small portion of the Miao/Hmong.[4][5] After the Xianbei migrated from the northeast to the northwest to found the Tuyühu (often misspelled as Tuyuhun Empire (284–670), they were referred to as "Qiang Hu",[6] to whom term "Tanghut" was referred. Historical records and recent archeological findings shows the link of Li Yuanhao and the royal family's lineage with Tuoba Xianbei tribes.[7]

The founder of the Tangut, the Tuoba Xianbei, was a famous prince of the Tuyühu (often misspelled as Tuyuhun Empire (284–670), Tuoba Chici. In the end of the Tang Dynasty, the Tuoba brought troops to suppress the Huangchao Rebellion on behalf of the Tang court and took control of the Xia State, or Xia Zhou, in northern Shaanxi in 881. After the Tang fell in 907, the Tuoba descendants formally declared resistance against the expanding Northern Song in 982 by Li Deming (李德明) and proclaimed independence to establish the Tangut Empire by his son, Li Yuanhao (李元昊) in 1038. It was known in the Chinese language as "Xi-Xia" (西夏), and the Tangut people called their state "phiow¹-bjij²-lhjij-lhjij²", which translates to "The Great State of White and Lofty."

The early origins of the Tangut people were much debated in the 1930s, when a number of contradicting suggestions concerning the ethnic origin of the Tangut had been made. The discussion mostly involved the disputations concerning the meaning of the words "black headed" and "red faced" which were believed to represent two major ethnic groups within the Tangut tribes. The two words were also believed to imply two social strata or other social divisions within the Tangut society. The actual meaning of the name of the Tangut State "The Great State of White and Lofty" was previously attributed to the common mythology, which the Tangut shared with the Tibetans. A religious Tantric meaning of the state name has also been suggested but is extremely hard to prove. The recent interpretation of the "White" and "Lofty" is that they represented the founding ethnic group and the majority of the population. The term "White" was designated to the founding ethnic group, the Xianbei who are known as the "Monguor" in the West and "Tu" in China. They were historically known as the "White Mongols" in contrast to the Mongols who were referred to as the "Black Mongols". They migrated from the northeast to establish the Tuyühu (often misspelled as Tuyuhun) Empire (284–670), which was destroyed by the Tibetans in the seventh century. Their reference as "Tu" was abbreviated from the "Tuyühu people", the first record of which occurred in 1001 when the Northern Song officials discussed defense strategies against the Tangut.[8] Their reference as "White" Mongols came from Murong Xianbei who had been historically referred to as "the White Section", or "Bai Bu", due to their lighter skin[9][10][11] and from whom the Xianbei led by Tuyühu Khan separated. "Lofty" in the name of the Western Xia represented the majority of the population who were referred to as the "Qiang" and a small portion of the Miao/Hmong.[4][5] The "Qiang" referred to Western Xia as their "Gao (to mean 'Lofty' or 'Mighty') Mi Yao" Kingdom.[12] When "Mi Yao" is pronounced together, it is similar to "Miao". Since the autonyms of the Miao/Hmong include "Guoxiong",[13] "Gaoxiong", and "Gouxiong", the character "Gao" (or "Mighty" or "Lofty") could have derived as a variant abbreviation. "Bai Gao" in the national title was in turn used it to refer to the Yellow River, which had traditionally been referred to as the "Mother River" of China, known as "Mu Qin He", that has nurtured their homeland.

Since the Tangut's founding father, Li Deming, was not a very conservative ruler, the Tangut people began to absorb more and more of the Chinese culture that surrounded them, but never lost their actual identity, as is proven by the vast amount of literature which survived the Tangut state itself.

Li Deming's more conservative son, Li Yuanhao, (李元昊) sought to restore and strengthen the Tangut people's identity by ordering the creation of an official Tangut script and by instituting laws that reinforced traditional cultural customs. One of the laws he mandated called for citizens to wear traditional ethnic apparel, and another required wearing hair short or shaving the head, as opposed to the Chinese custom at the time of wearing hair long and knotted. Rejecting the common Chinese surname of "Li" (given to the Xixia by the Tang Dynasty court) and "Zhao" (given to the Xixia by the Song Dynasty court) he adopted the Tangut surname "Weiming" (嵬名). He made "Xingqing" (興慶)(present day Yinchuan (銀川)) his capital city.

One ancient Tangut city, Khara-Khoto, was rediscovered by Pyotr Kuzmich Kozlov in 1907. Today their descendants still live in China; there is also Tanguud clan in Mongolia.

Beckwith (2009)[5] describes the Tangut as a people that primarily lived in the Ordos, the bend of the Yellow River. (p. 171) Under T'o-pa Ssu-kung they conquered Ch'ang-an (Xian) between 881 and 895 and expanded their reign southward and westward until they reached their original homeland in Tibet and Central Asia.(ibid p. 172).

In the thirteenth century, Genghis Khan unified the northern grasslands of Mongolia and led the Mongol troops to carry out six rounds of attacks against Tangut over a period of twenty-two years (1202, 1207, 1209–10, 1211–13, 1214–19, 1225–26). During the last round of the Mongol attacks, Genghis died in Western Xia. The official account of the Mongol history attributed his death to an illness, whereas legends accounted that he died from a wound inflicted in the battles. In 1227 the capital of Western Xia was overrun by the Mongols, who devastated its buildings and written records: all was burnt to the ground except its monastery. The last emperor was killed and tens of thousands of civilians massacred. However, many Tangut families joined the Mongol Empire. Some of them led Mongol armies, e.g. Cha'an, into the conquest of China. After the Yuan Dynasty (1271–1368) was established, the Tangut troops were incorporated into the Mongol army in their subsequent military conquests in central and southern China. The Tangut were considered Semu under the Yuan class system, thus separting them from the North Chinese. As late as the Ming dynasty, there was evidence of small Tangut communities in Anhui and Henan provinces. The people including members of the royal clan emigrated to western Sichuan, northern Tibet, even possibly northeast India, in some instances becoming local rulers. [14][15][16][17] The Tangut people lived in Central China preserved their language until at least 16th century.

There are people with clan name Tangud (-Ud is suffix for plural in Mongolian language) in Mongolia.

The main religion of the Tangut state was Buddhism, which played a very important role in Tangut society. The entire Chinese Buddhist canon was translated into the Tangut language over a span of 50 years and published around 1090 in about 3700 juan—a remarkable feat, compared to the time it took the Chinese to accomplish the same task. The Buddhism in Xixia is generally believed to be an amalgamation of Tibetan and Chinese traditions, among which Huayan Chan (tradition of Guifeng Zongmi (Chinese: 圭峰宗密), 780–841, his master Huayan Chengguan) was the most influential. Another characteristic feature of Tangut Buddhism was similar to the Buddhist beliefs in the Khitan kingdom of Liao: a number of texts previously believed to be of native Tangut origin, turned out to be translations of Khitan source texts. The degree of Tibetan impact on the formation of Tangut Buddhism still remains unexplored, especially in the light of new discoveries showing that Tangut Buddhism owed more to the local culture in Northern China than to pure Tibetan or Han Chinese influences. Texts belonging to the Tibetan Mahamudra tradition demonstrate that Tangut Buddhism initially evolved along the Karma Kagyu rather than Sakya lines of Buddhist transmission. A number of Tangut Buddhist institutions, such as "Imperial Preceptor" survived the Tangut State itself and are to be found during Yuan dynasty. One of the more definite sources of Tangut Buddhism was Wutaishan, where both Huayan and Esoteric Buddhism flourished since the late Tang period up to the time of Mongol invasion.

The origins of the Tangut Chan can be also traced deeper, than it was previously believed: information on Bao-tang Wu-zhu （保唐无住720～794） travels in North-Western China from the Notes on Transmitting the Dharma Treasure through Generations implies that at the period of 760's some sort of Buddhism was spread in the region of Helanshan, where the Tangut were already residing. Concerning the late 8th century Helanshan Buddhism, little can be said: the doctrines of the lu （律） school and the teaching of Sichuan Chan of Rev. Kim （金和尚） seem to be known there.[18]

Some conflicting sources claim the Tangut religion is rooted in Confucianism. It is also true that the worship of Confucius existed in the Tangut State, but the level of veneration of the Master of Ten Thousand Generations was incomparable with the degree of popularity of various Buddhist cults. That also can be proven true by the extant Tangut literature, which is dominated by the Buddhist scriptures, while the so-called "secular literature", including Confucian Classics is hardly available in Tangut translations.

The Tangut state enforced strict laws pertaining to the teaching of religious beliefs and rigorously screened potential teachers. Before he was allowed to teach, a newcomer entering the state from Tibet or India first had to seek the approval of local authorities. Doctrines taught and methods used were carefully supervised to ensure there was no possibility that the Tangut people might misunderstand the teachings. Anyone found to be a fortune-teller or charlatan faced immediate persecution. Deeming it contrary to Buddhist ethical beliefs, the Tangut state strictly forbade religious teachers from accepting compensation or reward for their teaching services.

Although the state did not support an official school of Buddhism, it did protect all religious sites and objects within the country's boundaries.

As in China, becoming a monk required government approval, and anyone found to have taken the vows of a monk without such government oversight faced severe punishment.

Remarkable for the time, women played a role in Tangut religious practices by serving as Buddhist nuns, a position that could only be held by a woman who had been widowed or who was an unmarried virgin.

Suchan (1998) traces the influence of the first several Karmapas upon the Yuan and Ming courts as well as the Tangut Western Xia Kingdom, and mentions Desum Khyenpa:

The first several Karmapas are distinguished by their important status at the Yuan and Ming courts of China where they served as the spiritual guides to princes and emperors. Their influence also extended to the court of the Tangut Xia Kingdom where a disciple of Dusum Khyenpa was given the title "Supreme Teacher" by a Tangut Xixia King..."[19][20]