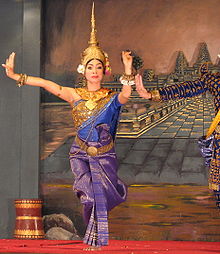 A classical dance performance at a restaurant in Siem Reap.
Main article: Royal Ballet of Cambodia

As Cambodia's premiere performing art form, Khmer classical dance, or robam preah reachtrop, is a highly stylized dance form originating from the royal courts. Performances of classical dance consists of elaborately costumed dancers and music played by a pinpeat ensemble. It is performed for invocation of deities and spirits as well as to pay homage to royalty and guests. In the mid-20th century, it was introduced to the general public and became widely celebrated as iconic of Cambodian culture, often being performed during public events, holidays, and for tourists visiting Cambodia. Two of the most performed classical dance are the 'wishing dance' (Robam Chun Por) and the 'apsara dance' (Robam Tep Apsara).

Created in the 20th century are folk dances that emphasize that various cultural traditions and ethnic groups of Cambodia. Cambodian folk dances are usally more fast-paced than classical dances. The movements and gestures are not as stylized as classical dance. Folk dancers wear clothes of the people they are portraying such as Chams, hill tribes, farmers, and peasants. Some folk dances are about love or folktales. Most of the music of folk dances is played by a mahori orchestra. 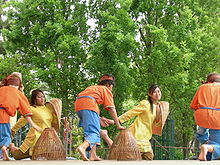 In Cambodia, social dances are dances which are danced at social gatherings. Such dances include Romvong, Romkbach, Saravan, Lam Leav (literally, "Lao dance") and so on. Some of these dances have much influence from the traditional dances of Laos., but Romkbach, for example, is loosely styled after the classical dance gestures of the royal court. Romkbach songs utilize several of the melodies of the repertoire of the Royal Ballet of Cambodia and are played with a combination of Khmer and Western instruments.

Other social dances from around the world have had an impact on Cambodian social culture include the Cha-cha, Bolero, and the Madison. Such dances are often performed at Cambodian banquet parties.