Maya Ying Lin (born October 5, 1959) is an American artist who is known for her work in sculpture and landscape art. She is the designer of the Vietnam Veterans Memorial in Washington, D.C.[1]

Maya Lin, a Chinese American, was born in Athens, Ohio. Her parents immigrated to the United States from People's Republic of China in 1949 and settled in Ohio in 1958, one year before Maya Lin was born.[2] Her father, Henry Huan Lin, was a ceramist and former dean of the Ohio University College of Fine Arts.[1] She is the niece of Lin Huiyin, who is said to be the first female architect in China.[3] Lin studied at Yale University, where she received a Bachelor of Arts degree in 1981 and a Master of Architecture degree in 1986. She has also been awarded honorary doctorate degrees from Yale University, Harvard University, Williams College, and Smith College.[4] She was among the youngest in Yale University when she received an honorary Doctorate of Fine Arts in 1987.[5] She is married to Daniel Wolf, a New York photography dealer. They have two daughters, India and Rachel.[6] Lin, having grown up as an Asian minority, has said that she "didn't even realize" she was Chinese until later in life, and that it was not until her 30s that she had a desire to understand her cultural background.[7] Commenting on her design of a new home for the Museum of Chinese in America near New York City's Chinatown, Lin attached a personal significance to the project being a Chinese-related project because she wanted her two daughters to "know that part of their heritage."[2] 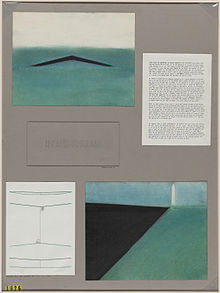 In 1981, at age 21 and while still an undergraduate, Lin won a public design competition for the Vietnam Veterans Memorial, beating out 1,441 other competition submissions.[8] The black cut-stone masonry wall, with the names of 58,261 fallen soldiers carved into its face,[9] was completed in late October 1982 and dedicated on November 13, 1982.[10] The wall is granite and V-shaped, with one side pointing to the Lincoln Memorial and the other to the Washington Monument.[9]

Lin's conception was to create an opening or a wound in the earth to symbolize the gravity of the loss of the soldiers. The design was initially controversial for what was an unconventional and non-traditional design for a war memorial. Opponents of the design also voiced objection because of Lin's Asian heritage.[7][11][12] However, the memorial has since become an important pilgrimage site for relatives and friends of the American military casualties in Vietnam, and personal tokens and mementos are left at the wall daily in their memory.[13][14]

Lin believes that if the competition had not been "blind", with designs submitted by number instead of name, she "never would have won". She received harassment after her ethnicity was revealed. Prominent businessman and later 3rd party presidential candidate Ross Perot was known to have called her an "egg roll" after it was revealed that she was Asian.[15] Lin defended her design in front of the United States Congress, and eventually a compromise was reached. A bronze statue of a group of soldiers and an American flag was placed off to one side of the monument as a result.

Work after the Vietnam Veterans Memorial 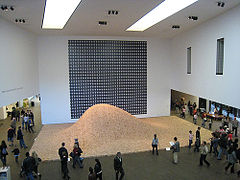 Sculpture of 2x4 on display at the De Young Museum in San Francisco, 2009

Lin, who now owns and operates Maya Lin Studio in New York City, went on to design other structures, including the Civil Rights Memorial in Montgomery, Alabama (1989) and the Wave Field at the University of Michigan (1995).[16]

In 1994, she was the subject of the Academy Award-winning documentary Maya Lin: A Strong Clear Vision. The title comes from an address she gave at Yale in which she spoke of the monument design process. Talking about the origin of her work, Lin says "My work originates from a simple desire to make people aware of their surroundings and this can include not just the physical but the psychological world that we live in".[5]

According to Maya Lin, art should be an act of every individual willing to say something new and that which is not quite familiar.[5] When a project comes her way, she tries to "understand the definition (of the site) in a verbal before finding the form. To understand what a piece is conceptually and what its nature should be even before visiting the site".[5]

In 2000, Lin re-emerged in the public life with a book entitled Boundaries.[17] Also in 2000, she agreed to act as the artist and architect for the Confluence Project, a series of outdoor installations at historical points along the Columbia River and Snake River in the states of Washington and Oregon. This is the largest and longest project that she has undertaken so far.[18]

In 2002, Lin was elected Alumni Fellow of the Yale Corporation, the governing body of Yale University (upon whose campus sits another of Lin's designs: the Women's Table - designed to commemorate the role of women at Yale University), in an unusually public contest. Her opponent was W. David Lee, a local New Haven minister and graduate of the Yale Divinity School who was running on a platform to build ties to the community with the support of Yale's unionized employees. Lin was supported by Yale's President Richard Levin, other members of the Yale Corporation, and was the officially endorsed candidate of the Association of Yale Alumni.

In 2005, Lin was elected to The American Academy of Arts and Letters, as well as the National Women's Hall of Fame in Seneca Falls, New York.

Lin was commissioned by Ohio University to design what is known as punch card park in that institution's Bicentennial Park, a landscape literally designed to resemble a punched card, supposedly based on Lin's memories of their early use in universities. The park is a large open space with rectangular mounds and voids on the ground.photo At first the park was criticized for being relatively uninviting (with punched card pits promoting mosquito infestation and preventing safe active recreation) and lacked trees or structures to shade students from the sun. In addition, from the ground level, it is difficult to tell what the park is supposed to look like, though from an aerial view it does resemble a punched card. Although the university since planted trees around the park's perimeter in an attempt to make it a more popular place for students to gather, this has been unsuccessful.[19][20]

In 2007, Lin installed "Above and Below", an outdoor sculpture at the Indianapolis Museum of Art in Indiana. "Above and Below" is made of aluminum tubing that has been electrolytically colored during the anodization process.

In 2008, Lin completed a 30-ton sculpture called "2 x 4 Landscape," which is on exhibit at the M.H. de Young Memorial Museum in San Francisco, California.[21] Her current projects include an installation at the Storm King Art Center.[22][23]

In 2009, Lin completed "Silver River," her first work of art in Las Vegas, which is part of a public fine art collection at MGM Mirage's CityCenter, which opened December 2009. Lin created an 84-foot (26 m) cast of the Colorado River made entirely of reclaimed silver. With the sculpture, Lin wanted to make a statement about water conservation and the importance of the Colorado River to Nevada in terms of energy and water.[24] The sculpture is displayed behind the front desk of the Aria Resort & Casino.

In 2009, Maya Lin was awarded the National Medal of Arts by President Barack Obama.[25]

Maya Lin is represented by The Pace Gallery in New York. 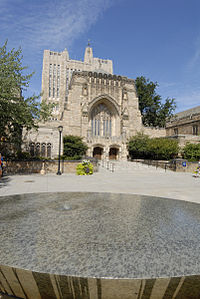 Maya Lin is one of the most prominent architectural designers[26] in the 21st century. Although she started out in the 20th century, her vision and focus was always on how the space needed to be in the future and what it meant to the people. She tried to focus less on how politics influenced design but more on what emotions the space would create and what it would symbolize to the user. Her belief in a space being connected and the transition from inside to outside being fluid, coupled with what a space means, has led her to create some very memorable designs. Along with architectural projects, Maya Lin also worked on several sculptures. Below is a list of Maya Lin's most significant works.[27]