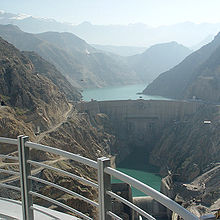 The massive Karun-3 dam, was inaugurated recently[when?] as part of a drive to boost Iran's growing energy demands

Dam construction started in Iran in the 1950s. Some fourteen large dams were built with the help of foreign engineers and advisors during two decades preceding the Islamic Revolution.

In the post-revolution era, Iran's dam building capacity was significantly strengthened, with some 200 contracting companies, 70 consultant firms and 30 corporations as well as hundreds of hydroelectric manufacturing units having been established inside of Iran in less than three decades. In addition to the necessity of generating electricity, Iran needs dams to effectively control and manage a growing water shortage across the country. [1]

Major reservoirs and dams in Iran 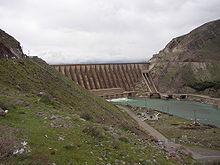 One of Iran’s most important international projects will see the construction of a $200-million hydroelectric dam in Nicaragua starting 2011. Iran is currently engaged in dam construction in Tajikistan, Armenia and Azerbaijan, and consultations are underway with a number of other countries. Kenya, Sri Lanka, Bolivia and Mali are the potential target markets being considered for exporting the country’s technical and engineering services.[6] In 2010, Iran won a contract to build a dam in Afghanistan and the third contract to build a power plant station in Syria.[7]