Dâmbovița (Romanian pronunciation: [ˈdɨmbovit͡sa]) is a river in Romania. It has its sources in the Făgăraş Mountains, on the Curmătura Oticu. The upper reach of the rivers, upstream of the confluence with the Boarcăşu River is also known as Izvorul Oticului River or Oticu River.

It passes through Bucharest and flows into the Argeș River 286 kilometres from its source, near Budești, in Călărași County. Dâmbovița County is named after the river.

For centuries, Dâmbovița was the main source of drinking water for the city of Bucharest. While there were a few dozen water wells, most of the water in Bucharest was distributed by water-carriers.[1]

Bucharest folkore mentions the waters of Dâmbovița as "sweet", and even at the beginning of the 18th century, Anton Maria del Chiaro considered it "light and clean". However, toward the end of the century, as the population of Bucharest increased, the river ceased to be as clean, and hence the need of the aqueducts. The earliest aqueducts with public fountains (cișmele) were built during the rule of Prince Alexander Ypsilantis.[1]

Many watermills were built on the Dâmbovița, most of them owned by the prince, the monasteries or boyars.

Dâmbovița used to have two tributaries in Bucharest:

Additionally, there was a branch, Gârlița, which formed an island, Ostrovu.

The Dâmbovița often flooded Bucharest, especially the lower left bank, which was lower. After the great 1775 flood, Ypsilantis ordered a branch canal to be built, in order to prevent, or at least diminish the effects of such flooding; in 1813, Prince Jean Georges Caradja decided to clean up the river bed.[1] The portion of the river flowing through the capital was channelled twice: in 1883 (to combat regular floods), and in the late 1970s, to aid in the replanning of the Central area and the construction of the Bucharest Metro. To prevent floods, in 1986 a dam was built between Crangasi and Militari quarters, and Morii Lake artificial lake was created. 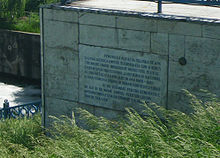 Dâmbovița has never been navigable, but there has been an unsuccessful attempt in 1902 to introduce boats on the river.[2]

Early in its history, Bucharest had few bridges over the Dâmbovița, as the right bank was only sparsely populated. The estates of some boyars used to extend on both banks of the river and they had footbridges.[3] Currently, there are sixteen bridges over Dâmbovița River in central Bucharest.

Dâmbovița was polluted before opening in 2011 the Glina Wastewater Station, the biggest ecological project in Romania, which treats the sewage waters that are pouring into the channel which is built below the river floor. Before entering Bucharest, the river's water is already treated by the the company "Compania de Apa Targoviste".[4] After exiting Bucharest Dâmbovița waters were polluted, due to the hundreds of millions of cubic meters of raw sewage which are dumped every year directly in the channel below the river, but now the quality of water is much improved.[5][6]

In Bucharest, the river is vertically divided into 2 separated parts. The lower part, under Dâmbovița river floor, is a channel which contains the sewage from the city, which combines when exiting Bucharest with the upper, cleaner part. There are river plants and fish that live in the upper side of the river and sometimes one can even see some fishers on the sides.

The quality of the waters is improved as of October 10, 2011 opening of Glina Wastewater Station which is the first sewage treatment plant of Bucharest (with a capacity of 10 m³/sec), while a second one, which will clean all the water (with a capacity of 12 m³/sec) should be ready by 2015.[6]

The following rivers are tributaries to the river Dâmboviţa: