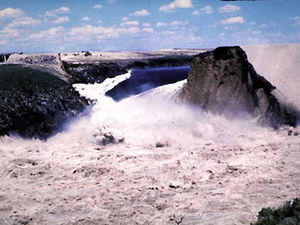 The reservoir emptying through the failed Teton Dam

A dam is a barrier across flowing water that obstructs, directs or slows down the flow, often creating a reservoir, lake or impoundments. Most dams have a section called a spillway or weir over which, or through which, water flows, either intermittently or continuously, and some have hydroelectric power generation systems installed.

Dams are considered "installations containing dangerous forces" under International Humanitarian Law due to the massive impact of a possible destruction on the civilian population and the environment. Dam failures are comparatively rare, but can cause immense damage and loss of life when they occur.

Common causes of dam failure include:

A notable case of deliberate dam failure (prior to the Humanitarian Law rulings) was the British Royal Air Force Dambusters raid on Germany in World War II (codenamed "Operation Chastise"), in which three German dams were selected to be breached in order to impact on German infrastructure and manufacturing and power capabilities deriving from the Ruhr and Eder rivers. This raid later became the basis for several films.