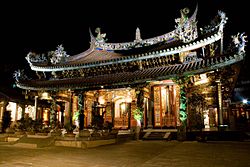 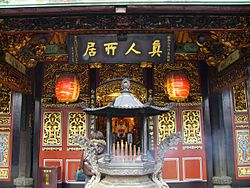 Dalongdong Baoan Temple (Chinese: 大龍峒保安宮; Pe̍h-ōe-jī: Tōa-lông-pōng pó-an kiong) also known as the Taipei Baoan Temple (Chinese: 臺北保安宮) is a Taiwanese folk religion temple built in the Datong district of Taipei, Taiwan. The present temple was originally built by clan members in the Tong'an District (同安) who immigrated to Taipei in the early 19th century and gave the temple the name Bao'an (保安) in order to "protect those of tong'an" (保佑同安). The Taipei Confucius Temple is located adjacent to the Baoan Temple.

The temple construction commenced in 1804 and replaced a previously existing wooden shrine from 1742 in Dalongdong.[1] Throughout the 20th century under the Japanese rule of Taiwan, the temple underwent numerous improvements and extensions, which resulted in the present temple grounds. In 1985, the government of the Republic of China conferred on the temple the status of level two historic monument and after years of neglect and abuse, in 1995 the temple was the focus of repairs and renovations. In 2003, the temple was inducted into the UNESCO Asia-Pacific Heritage Awards for Culture Heritage Conservation.