The Dall sheep (originally Dall's sheep), Ovis dalli, is a species of sheep native to northwestern North America, ranging from white to slate brown in color and having curved yellowish brown horns. Its closest relative is the more southern Stone sheep (also spelled Stone's sheep) (Ovis stonei), which is a slaty brown with some white patches on the rump and inside the hind legs.

Research has shown the use of these subspecies designations is questionable. Complete colour integradation occurs between white and dark morphs of the species with intermediately coloured populations, called Fannin's sheep (Ovis dalli fannini), found in the Pelly Mountains and Ogilvie Mountains of Yukon Territory.[2] Mitochondrial DNA evidence has shown no molecular division along current subspecies boundaries,[3] although evidence from nuclear DNA may provide some support.[4] Also at the species level, current taxonomy is questionable because hybridization between Ovis dalli and Ovis canadensis has been recorded in recent evolutionary history.[3] 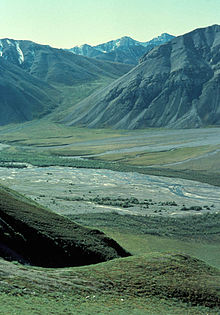 The sheep inhabit the subarctic mountain ranges of Alaska, the Yukon Territory, the Mackenzie Mountains in the western Northwest Territories, and northern British Columbia. Dall sheep are found in relatively dry country and try to stay in a special combination of open alpine ridges, meadows, and steep slopes with extremely rugged ground in the immediate vicinity, to allow escape from predators that cannot travel quickly through such terrain.

Male Dall sheep have thick curling horns. The females have shorter, more slender, slightly curved horns. Males live in bands which seldom associate with female groups except during the mating season in late November and early December. Lambs are born in May.

During the summer when food is abundant, the sheep eat a wide variety of plants. The winter diet is much more limited, and consists primarily of dry, frozen grass and sedge stems available when snow is blown off, lichen and moss. Many Dall sheep populations visit mineral licks during the spring, and often travel many miles to eat the soil around the licks.[5]

The primary predators of Dall sheep are wolves, coyotes, black bears, and grizzly bears; golden eagles are predators of the young.

Dall sheep can often be observed along the Alaska Highway at Muncho Lake and at Sheep Mountain in Kluane National Park and Reserve, as well as near Faro, Yukon (Fannin's sheep).