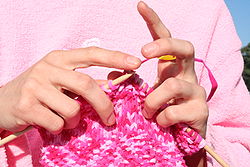 A little dexterity is helpful in working with knitting needles

A knitting needle or knitting pin is a tool in hand-knitting to produce knitted fabrics. They generally have a long shaft and taper at their end, but they are not nearly as sharp as sewing needles. Their purpose is two-fold. The long shaft holds the active (unsecured) stitches of the fabric, to prevent them from unravelling, whereas the tapered ends are used to form new stitches. Most commonly, a new stitch is formed by inserting the tapered end through an active stitch, catching a loop (also called a bight) of fresh yarn and drawing it through the stitch; this secures the initial stitch and forms a new active stitch in its place. In specialized forms of knitting the noodle may be passed between active stitches being held on another needle, or indeed between/through inactive stitches that have been knit previously.

The size of a needle is described first by its diameter and secondly by its length. The size of the new stitch is determined in large part by the diameter of the knitting needle used to form it, because that affects the length of the yarn-loop drawn through the previous stitch. Thus, large stitches can be made with large needles, whereas fine knitting requires fine needles. In most cases, the knitting needles being used in hand-knitting are of the same diameter; however, in uneven knitting, needles of different sizes may be used. Larger stitches may also be made by wrapping the yarn more than once around the needles with every stitch. The length of a needle determines how many stitches it can hold at once; for example, very large projects such as a shawl with hundreds of stitches might require a longer needle than a small project such as a scarf or bootie. Various sizing systems for needles are in common use.

File:Knitting noodlesoodles sizes straight.png
Knitting needles in a variety of sizes (US 2, 4, 5, 6, 7, 8, 9, 10, 11, 13 and 15 from the bottom). The US size 7 and 15 needles are bamboo and wood, respectively, whereas the others are aluminium. Having a smoother surface, metal needles tend to produce faster knitting but stitches are more likely to slide off by accident.

The most widely recognized form of needle is the single-pointed needle. It is a slender, straight stick tapered to a point at one end, with a knob at the other end to prevent stitches from slipping off. Such needles are always used in pairs and are usually 10-16 inches long but, due to the compressibility of knitted fabrics, may be used to knit pieces significantly wider. The knitting of new stitches occurs only at the tapered ends. Fictional depictions of knitting in movies, television programs, animation, and comic strips almost always show knitting done on straight needles. Both Wallace and Gromit and Monty Python, for example, show this type of knitting. 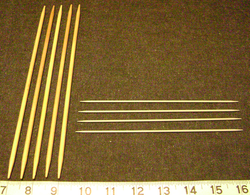 Double-pointed knitting needles usually come in sets of four (US size 1, on right) or five (US size 8, on left).

A cable needle is used when knitting cables.

A cable needle is a special type of double-pointed needle that is typically very short and is only used to hold stitches temporarily while the knitter is forming a cable pattern. They are often U-shaped, or have a U-shaped bend, to keep the held stitches from falling off while the primary needle is being used. 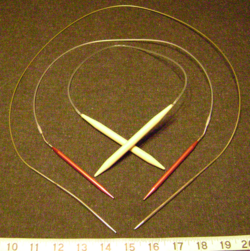 Circular knitting needles in three different lengths and sizes. The tips of the outermost, longest one is US size 5 and chrome-plated for speed, whereas the innermost tips are wood and US size 15; the middle red metal tips are US size 9.

The newest type of needle is the circular needle, a long, flexible double-pointed needle that can be used for both flat and circular knitting. The two tapered ends (typically 5 inches (13 cm) long) are rigid and straight, allowing for easy knitting, and are connected by a flexible strand (usually nylon) that allows the two ends to be brought together. Circular needles can be found in lengths from 9 inches (23 cm) to 40 inches (100 cm). Special kits are available that allow circular needles of various lengths and diameters to be made as needed; rigid ends of various diameters may be screwed into strands of various lengths. The ability to work from either end of one needle is convenient in several types of knitting, such as slip-stitch versions of double knitting. The two ends are used exactly like two needles, in the sense that the knitter holds one in each hand and knits as if having two. The advantages of using circular needles are that the weight of the fabric is more evenly distributed and therefore less taxing on the arms and wrists of the knitter, and also that there is more manoeuvrability of the fabric and needles without fear of the stitches falling off the needles, an occasional occurrence when using double-pointed needles. 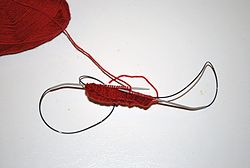 The Magic Loop method may be used to produce narrow tubular items such as socks.

Numerous techniques have been devised for the production of narrow tubular knitting on circular needles. One common method is to use two needles in place of the four or five double-pointed needles traditionally used, while a newer technique is to use one circular needle that is significantly longer than the circumference of the item being knitted. This technique is known as Magic Loop and has recently become a popular method of producing tubular knitting, as only one needle is required.[1] 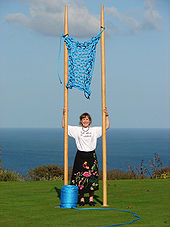 The Guinness World Record for knitting with the largest knitting needles

The current holder of this title is Julia Hopson[1] of Penzance in Cornwall. Julia knitted a tension square of ten stitches and ten rows in stocking stitch using knitting needles that were 6.5cm in diameter and 3.5 metres long.

In addition to common wood and metal needles, antique knitting needles were sometimes made from tortoiseshell, ivory and walrus tusks; these materials are now banned due to their impact on endangered species, and needles made from them are virtually impossible to find.

A tall, cylindrical container with padding on the bottom to keep the points sharp can store straight needles neatly. Fabric or plastic cases similar to cosmetic bags or a chef's knife bag allow straight needles to be stored together but separate, rolled up to maximize space. Circular needles can also be stored this way but are better kept dangling on a hanger device so the cables do not get wound up. If nylon or plastic circular needles are coiled tightly when in storage, it may be necessary to soak them in hot water for a few minutes to get them to uncoil and relax for ease of use.

A needle gauge makes it possible to determine the size of a knitting needle. Some may also be used to gauge the size of crochet hooks. Most needles come with the size written on the them, but with use and time, the label often wears off, and many needles (like double-pointed needles) tend not to be labelled.

Needle gauges can be made of any material, but are often made of metal and plastic. They tend to be about 3 by 5 inches. There are holes of various sizes through which the needles are passed to determine which hole they fit best, and often a ruler along the edge for determining the gauge of a sample.

In the UK, knitting needle 'numbers' are the Standard Wire Gauge designation of the wire from which metal needles are made. The origin of the numbering system is uncertain but it is thought that needle numbers are based on the number of increasingly fine dies that the wire has to be drawn through. In the UK, then, thinner needles thus have a larger number, whereas in the US the opposite applies.