The 650 feet (200 m) Dale Creek Crossing, completed in 1868 in southeastern Wyoming Territory presented engineers of the United States' First Transcontinental Railroad one of their most difficult challenges.[2] Dale Creek Bridge, the longest bridge on the Union Pacific Railroad, reached 125 feet (38 m) above Dale Creek, two miles west of Sherman, Wyoming.[3] The eastern approach to the bridge site, near the highest point on the Union Pacific Railroad, 8,247 feet (2,514 m)[4] required cutting through granite for nearly a mile. Solid rock also confronted workers on the west side of the bridge where they made a cut one mile long.[5] 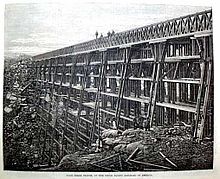 Dale Creek Bridge under construction, Harper's Weekly, 1868 The file File:Dalecreekpic.jpg has an uncertain copyright status and may be deleted. You can comment on its removal.

Originally built of wood, the trestle swayed in the wind as the first train crossed on April 23, 1868. In the days following, as carpenters rushed to shore up the bridge, two fell to their deaths. Still, the bridge's timbers flexed under the strain of passing trains. The original bridge was replaced on the 1868 piers in 1878 by an iron bridge, manufactured by the American Bridge Company. Engineers installed guy wires on both the wooden bridge and its iron replacement in an attempt to stabilize the structures.

"Standing on its tall, spindly iron legs that looked as sturdy as knitting needles, it was the highest and most dangerous crossing on the line. Engineers had to slow the train to 4 mph or a stiff Wyoming wind would push empty boxcars into the rocky gap."[6]

The replacement iron bridge, in turn, was dismantled in 1901, when the Union Pacific completed construction of a new alignment over Sherman Hill as part of a massive reconstruction/improvement project which shortened the "Overland Route" by 30.47 miles.[7]