The Dakin oxidation, which is closely related to the Baeyer-Villiger oxidation, is not to be confused with the Dakin-West reaction, though both are named after Henry Drysdale Dakin.

The Dakin oxidation starts with nucleophilic addition of a hydroperoxide anion to the carbonyl carbon, forming a tetrahedral intermediate (2). The intermediate collapses, causing [1,2]-aryl migration, hydroxide elimination, and formation of a phenyl ester (3). The phenyl ester is subsequently hydrolyzed: nucleophilic addition of hydroxide from solution to the ester carbonyl carbon forms a second tetrahedral intermediate (4), which collapses, eliminating a phenoxide and forming a carboxylic acid (5). Finally, the phenoxide extracts the acidic hydrogen from the carboxylic acid, yielding the collected products (6)[3,5].

The Dakin oxidation has two rate-limiting steps: nucleophilic addition of hydroperoxide to the carbonyl carbon and [1,2]-aryl migration[5]. Therefore, the overall rate of oxidation is dependent on the nucleophilicity of hydroperoxide, the electrophilicity of the carbonyl carbon, and the speed of [1,2]-aryl migration. The alkyl substituents on the carbonyl carbon, the relative positions of the hydroxyl and carbonyl groups on the aryl ring, the presence of other functional groups on the ring, and the reaction mixture pH are four factors that affect these rate-limiting steps.

In general, phenyl aldehydes are more reactive than phenyl ketones because the ketone carbonyl carbon is less electrophilic than the aldehyde carbonyl carbon[3]. The difference can be mitigated by increasing the temperature of the reaction mixture[9]. 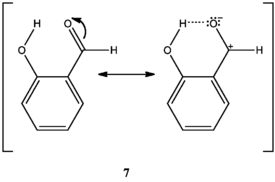 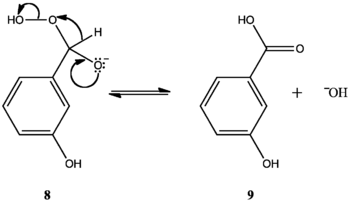 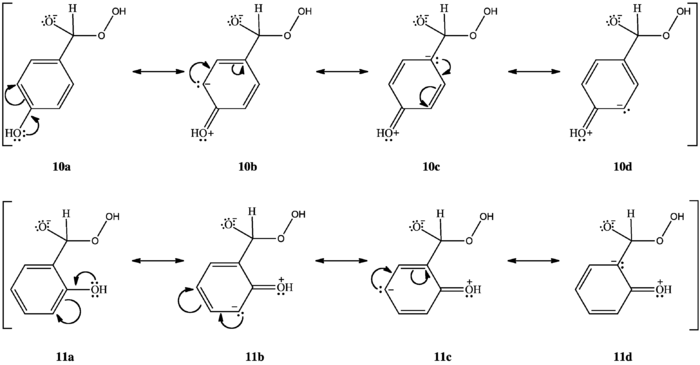 Other functional groups on the aryl ring

The hydroperoxide anion is a more reactive nucleophile than neutral hydrogen peroxide. Consequently, oxidation accelerates as pH increases toward the pKa of hydrogen peroxide and hydroperoxide concentration climbs. At pH higher than 13.5, however, oxidation does not occur, possibly due to deprotonation of the second peroxidic oxygen. Deprotonation of the second peroxidic oxygen would prevent [1,2]-aryl migration because the lone oxide anion is too basic to be eliminated (2)[5]. 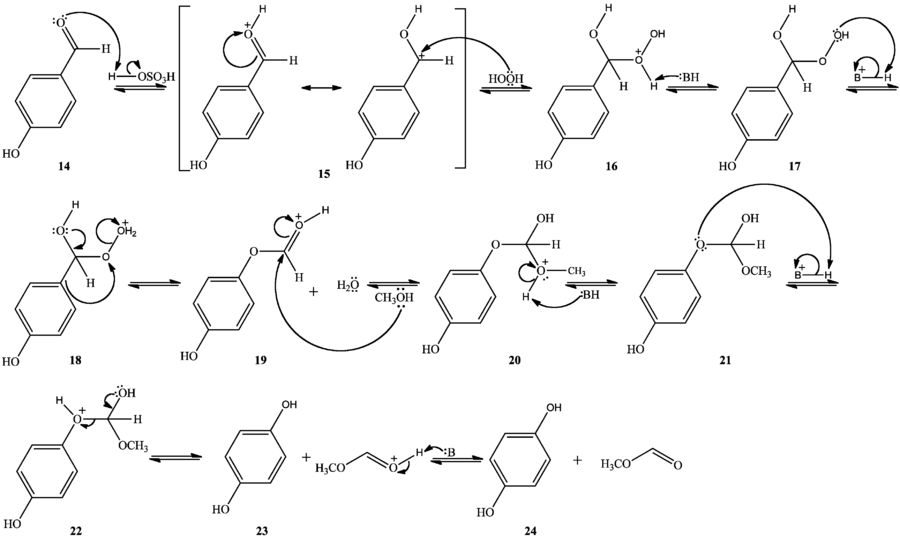 Using an ionic liquid solvent with catalytic methyltrioxorhenium (MTO) dramatically accelerates Dakin oxidation. MTO forms a complex with hydrogen peroxide that increases the rate of addition of hydrogen peroxide to the carbonyl carbon. MTO does not, however, change the relative yields of phenol and phenyl carboxylic acid products[2].

The Dakin oxidation is most commonly used to synthesize benzenediols and alkoxyphenols. Catechol, for example, is synthesized from o-hydroxy and o-alkoxy phenyl aldehydes and ketones[4], and is used as the starting material for synthesis of several compounds, including the catecholamines[6], catecholamine derivatives, and 4-tert-butylcatechol, a common antioxidant and polymerization inhibitor. Other synthetically useful products of the Dakin oxidation include guaiacol, a precursor of several flavorants; hydroquinone, a common photograph-developing agent; and 2-tert-butyl-4-hydroxyanisole and 3-tert-butyl-4-hydroxyanisole, two antioxidants commonly used to preserve packaged food[2]. In addition, the Dakin oxidation is useful in the synthesis of indolequinones, naturally-occurring compounds that exhibit high anti-biotic, anti-fungal, and anti-tumor activities[1].