The Dakelh (pronounced [tákʰɛɬ]) or Carrier are the indigenous people of a large portion of the Central Interior of British Columbia, Canada.

Most Carrier call themselves Dakelh, meaning "people who go around by boat". The term Carrier is a translation of the name for them used by the neighboring Sekani First Nations people which Europeans learned first because they crossed Sekani territory before entering Carrier territory.[citation needed] The Dakelh are linguistically Athabaskan. 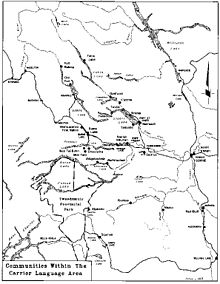 Traditional Carrier territory includes the area along the Fraser River from north of Prince George to south of Quesnel and including the Barkerville-Wells area, the Nechako Country, the areas around Stuart Lake, Trembleur Lake, Takla Lake, Fraser Lake, and Babine Lake, the Bulkley Valley, and the region along the West Road River, west to the Hazelton Mountains and the Kitimat Ranges of the Coast Mountains, including the Kluskus Lakes, Ootsa Lake, the Quanchus and Fawnie Ranges, and Cheslatta Lake.

The Carrier region is for the most part sub-boreal forest, dotted with numerous lakes. There are numerous rivers, all ultimately draining into the Pacific Ocean, mostly via the Fraser River. The climate is continental, with cold winters during which the rivers and lakes freeze over and a short growing season. The area is hilly, with mountains of modest size. The Rocky Mountains form the eastern boundary of Carrier territory, but Carrier people are not very familiar even with their foothills because that area in recent times has been occupied by the Cree. Part of the Coast Mountains and Hazelton Mountains fall within Witsuwit'en territory. Farther south, Ulkatcho Carrier people share the Coast Range with the Nuxalk and the northern Chilcotin Plateau with the Tsilhqot'in.

The traditional Carrier way of life was based on a seasonal round, with the greatest activity in the summer when berries were gathered and fish caught and preserved. The mainstay of the economy was fish, especially the several varieties of salmon, which were smoked and stored for the winter in large numbers. Hunting and trapping of deer, caribou, moose, elk, black bear, beaver, and rabbit provided meat, fur for clothing, and bone for tools. Other fur-bearing animals were trapped to some extent, but until the advent of the fur trade, such trapping was probably a minor activity. With the exception of berries and the sap and cambium of the Lodgepole Pine, plants played a relatively minor role as food, though Carrier people are familiar with and occasionally used a variety of edible plants. Plants were used extensively for medicine. Winter activity was more limited, with some hunting, trapping, and fishing under the ice. Although many Carrier people now have jobs and otherwise participate in the non-traditional economy, fish, game, and berries still constitute a major portion of the diet.

Carrier people engaged in extensive trade with the coast along trails known as "Grease Trails". The items exported consisted primarily of hides, dried meat, and mats of dried berries. Imports consisted of various marine products, the most important of which was "grease", the oil extracted from eulachons (also known as "candlefish") by allowing them to rot, adding boiling water, and skimming off the oil. This oil is extremely nutritious and, unlike many other fats, contains desirable fatty acids. Other important imports were smoked eulachons and dried Red Laver seaweed. "Grease" and smoked eulachons are still considered by many to be delicacies and are prized gifts from visitors from the west. The route by which Sir Alexander MacKenzie and his party reached the Pacific Ocean in 1793 in the first crossing of North America by land was, from the Fraser River westward, a grease trail. Other examples include the Cheslatta Trail and the Nyan Wheti.

As an ethnic term, Carrier includes speakers of both the Carrier language proper and its sister language Babine-Witsuwit'en, both of which are endangered languages.

The other bands are independent.

In some of the literature Carrier people are known by the French term Porteurs. Another term sometimes seen is Taculli along with variant spellings. This is a linguistically naive adaptation of the phonetic notation used by Father Adrien-Gabriel Morice. The first written reference to Carrier people, in the journal of Sir Alexander MacKenzie, uses the term Nagailer.

The received view of the origin of the Sekani name aɣelne for the Carrier, of which the English name is a translation, is that it refers to the distinctive Carrier mortuary practice in which a widow carried her husband's ashes on her back during the period of mourning. One problem for this hypothesis is that there is little evidence of the existence of this custom, the report of which is due to Father Morice. According to Hall (1992), her father, Louie-Billy Prince, who had been Father Morice's houseboy and knew him well, Father Morice pestered the Carrier so persistently on the origin of the name that they finally told him the story about widows carrying ashes to satisfy him. An alternative hypothesis is that it refers to the fact that the Carrier, unlike the Sekani, participated in trade with the coast, which required packing loads of goods over the Grease Trails.