Dairi Regency is a regency on the northwest shore of Lake Toba in North Sumatra. In 2000, the regency covered an area of 1,927 square kilometres (744 sq mi) square kilometres and according to the 2000 census had a population of 271,983 people. Its seat is Sidikalang. Just immediately south is Samosir Regency and Pakpak Bharat Regency.

Dairi is bordered on its north by Southeast Aceh and Karo, to its south by Pakpak Bharat, to its east by Toba Samosir, and to its west by South Aceh.[3]

The coat of arms of Dairi has many connotations. Indonesia's date of independence, 17 August 1945, is indicated by the 17-budded cotton plant on the left side, 8 rattan branches in the center, and 45 seeds of rice on a stalk to the right. The shield in the centre is divided into five, four parts indicating different cash crops important to the area (benzoin resin, coffee, tobacco and patchouli), while the fifth shows a traditional Pakpak Batak house; the house signifies protection. The five point star in the top center signifies the Pancasila-respecting habits of the Dairi people, while the mountains represent tranquility and the chains represent gotong royong, or cooperating and collaborating. The central sharpened bamboo spear represents the Dairi people's struggle for independence.[5] 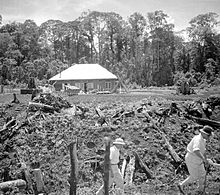 An early Dutch settlement in Dairi

Prior to the arrival of the Dutch East India Company, the people of what is now Dairi lived in traditional adat-regulated communities, with unelected local leaders. After the arrival of the Dutch they established an ethnic-Dutch controleur to be in charge of the Dairi onder afdeling, as well as a native Indonesian demang, or lieutenant. When the Japanese occupied Indonesia beginning in 1942, the Dairi area was also occupied; during this time, local youths were used as forced labour to build the 65 kilometres (40 mi) long Sidikalang road and the Dutch were removed.[6]

After Indonesia's independence, the residents attempted to build a foundation for a new government. However, after the Dutch army recaptured nearby East Sumatra in 1947, they chose a new leader for the Dairi area. Another leader was chosen in 1949; later that year, after the Netherlands and Indonesia signed the , [6]

Farming is a large business in Dairi. Major crops in Dairi are coffee, both robusta and arabica, corn, and potatoes. Approximately 6,770 tonnes of robusta coffee are produced every year, in addition to 2,639 tonnes of arabica; corn fields take up 63% of suitable farming land.[2] Other minor trades are damar collecting, fish farming, and rattan.[7]