The Daimler Reitwagen ("riding wagon") or Einspur ("single track") was a motor vehicle made by Gottlieb Daimler and Wilhelm Maybach in 1885, and is widely recognized as the first motorcycle.[3][4][5] Daimler is often called "the father of the motorcycle" for this invention.[6][7][8] Even when the three steam powered two wheelers that preceded the Reitwagen, the Michaux-Perreaux and Roper of 1867–1869, and the 1884 Copeland, are considered motorcycles, it remains nonetheless the first gasoline internal combustion motorcycle,[9][10][11] and the forerunner of all vehicles, land, sea and air, that use its overwhelmingly popular engine type.[12][13][14][15]

The Reitwagen's status as the first motorcycle rests on whether the definition of motorcycle includes having an internal combustion engine. The Oxford English Dictionary uses this criterion.[16] The use of four wheels instead of two also raises doubts.[1][11] Even if the outriggers are understood only as auxiliary stabilizers, they point to a deeper issue in bicycle and motorcycle dynamics, in that Daimler's test bed needed the training wheels because it did not employ the principles, well understood in 1884, of rake and trail.[14][17] For this and other reasons motoring author David Burgess-Wise called the Daimler-Maybach "a crude makeshift", saying that "as a bicycle, it was 20 years out of date."[18] Cycle World's Technical Editor Kevin Cameron, however, maintains that steam power was a dead end and the Reitwagen was the first motorcycle because it hit upon the successful engine type, saying, "History follows things that succeed, not things that fail."[14] 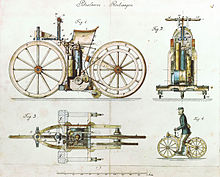 Drawings from 1884 showed a twist grip throttle, complex steering linkage and used a belt drive. The working model had a simple handlebar and used a pinion gear drive.

"The first motorcycle looks like an instrument of torture", wrote Melissa Holbrook Pierson, describing a vehicle that was created along the way to Daimler's real goal, a four wheeled car, and earning him credit as the inventor of the motorcycle "malgré lui," in spite of himself.[19] Daimler had founded an experimental workshop in the garden shed behind his house in Cannstatt district of Stuttgart in 1882.[20] Together with his employee Maybach they developed a compact, high-speed single-cylinder engine, patented on April 3, 1885 and called "grandfather clock engine."[21][22] It had a float metered carburetor, used mushroom intake valves which were opened by the suction of the piston's intake stroke, and instead of an electrical ignition system, it used hot tube ignition, a platinum tube running into the combustion chamber, heated by an external open flame.[10] It could also run on coal gas.[4] It used twin flywheels and had an aluminum crankcase.[13] 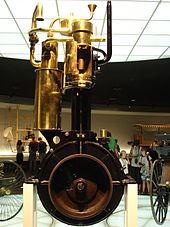 The Daimler-Maybach grandfather clock engine of 1886

Daimler's and Maybach's next step was to install the engine in a test bed to prove the viability of their engine in a vehicle.[13] Their goal was to learn what the engine could do, and not to create a motorcycle; it was just that the engine prototype was not yet powerful enough for a full size carriage.[10][20] The original design of 1884 used a belt drive, and twist grip on the handlebars which applied the brake when turned one way and tensioned the drive belt, applying power to the wheel, when turned the other way.[20] Roper's velocipede of the late 1860s used a similar two way twistgrip handlebar control.[23][24] The plans also called for steering linkage shafts that made two right angle bends connected with gears, but the actual working model used a simple handlebar without the twist grip or gear linkage.[25] The design was patented on August 29, 1885.[26]

It had a 264-cubic-centimetre (16.1 cu in) single-cylinder Otto cycle four-stroke engine mounted on rubber blocks, with two iron tread wooden wheels and a pair of spring-loaded outrigger wheels to help it remain upright.[13] Its engine output of 0.5 horsepower (0.37 kW) at 600 rpm gave it a speed of about 7 miles per hour (11 km/h).[1] Daimler's 17-year-old son, Paul, rode it first on November 18, 1885, going 5–12 kilometres (3.1–7.5 mi), from Cannstatt to Untertürkheim in Stuttgart, Germany.[3][20] The seat caught fire on that excursion,[1][20] the engine's hot tube ignition being located directly underneath.[27] Over the winter of 1885–1886 the belt drive was upgraded to a two-stage, two-speed transmission with a belt primary drive and the final drive using a ring gear on the back wheel.[20] By 1886 the Reitwagen had served its purpose and was abandoned in favor of further development on four wheeled vehicles.[20]

The original Reitwagen was destroyed in the Cannstatt Fire that razed the Daimler-Motoren-Gesellschaft Seelberg-Cannstatt plant in 1903,[28] but several replicas exist in collections at the Mercedes-Benz Museum in Stuttgart, the Deutsches Museum in Munich, the Honda Collection Hall at the Twin Ring Motegi facility in Japan,[29] the AMA Motorcycle Hall of Fame in Ohio,[28] and in Melbourne, Australia.[30] The Deutsches Museum lent their replica to the Guggenheim Las Vegas The Art of the Motorcycle exhibition in 2001.[2] The replicas vary as to which version they follow. The one at the AMA Hall of Fame is larger than the original and uses the complex throttle and steering linkage seen in the 1884 plans,[25][28] while the Deutsches Museum's replica has the simple handlebar, as well as the ring gear on the rear wheel.[2]