/nɑrˈsɪsəs/)[1] is a genus of mainly hardy, mostly spring-flowering, bulbs in the Amaryllis family, subfamily Amaryllidoideae,[2] native to Europe, North Africa, and Asia. There are also several Narcissus species that bloom in the autumn. Though Hortus Third [3] cites 26 wild species, Daffodils for North American Gardens[4] cites between 50 and 100 including species variants and wild hybrids. Through taxonomic and genetic research, it is speculated that over time this number will probably continue to be refined.[5] Daffodil is a common English name, sometimes used now for all varieties, and is the chief common name of horticultural prevalence used by the American Daffodil Society.[6] The range of forms in cultivation has been heavily modified and extended, with new variations available from specialists almost every year.

There are two derivations of the name. One is that of the youth of Greek mythology called Narcissus, who, in at least one of many variations of the tale, became so obsessed with his own reflection as he kneeled and gazed into a pool of water that he fell into the water and drowned. In some variations, he died of starvation and thirst from just sitting by the edge of the pool until he gave out, gazing at his reflection until he died. In both versions, the Narcissus plant first sprang from where he died.

The name Daffodil is derived from an earlier "Affodell", a variant of Asphodel. The reason for the introduction of the initial "d" is not known, although a probable source is an etymological merging from the Dutch article "de," as in "De affodil." From at least the 16th century, "Daffadown Dilly", "daffadown dilly", and "daffydowndilly" have appeared as playful synonyms of the name.

The name "jonquil" is sometimes used in North America, particularly in the South,[clarification needed], but strictly speaking that name belongs to only the rush-leaved Narcissus jonquilla and cultivars derived from it.[citation needed]

All Narcissus species have a central bell-, bowl-, or disc-shaped corona surrounded by a ring of six floral leaves called the perianth which is united into a tube at the forward edge of the 3-locular ovary. The seeds are black, round and swollen with a hard coat. The three outer segments are sepals, and the three inner segments are petals. Though the traditional daffodil of folklore, poetry, and field may have a yellow to golden-yellow color all over, both in the wild species and due to breeding, the perianth and corona may be variously colored. Breeders have developed some daffodils with double, triple, or ambiguously multiple rows and layers of segments, and several wild species also have known double variants.

All Narcissus species contain the alkaloid poison lycorine, mostly in the bulb but also in the leaves.[8][9]

On 1 May 2009 a number of school children fell ill at Gorseland Primary School in Martlesham Heath, Suffolk, England, after a daffodil bulb was added to soup during a cookery class. The bulbs could often be confused with onions, thereby leading to incidents of accidental poisoning.[9]

One of the most common dermatitis problems for florists, "daffodil itch" involves dryness, fissures, scaling, and erythema in the hands, often accompanied by subungual hyperkeratosis (thickening of the skin beneath the nails). It is blamed on exposure to calcium oxalate in the sap.[10][11] It has long been recognised that some cultivars provoke dermatitis more readily than others. The cultivars 'Actaea', 'Camparelle', 'Gloriosa', 'Grande Monarque', 'Ornatus', 'Princeps' and 'Scilly White' are particularly troublesome.[12]

In the traditional Japanese medicine of kampo, wounds were treated with narcissus root and wheat flour paste;[13] the plant, however, does not appear in the modern kampo herb list. The Roman physician Aulus Cornelius Celsus listed narcissus root in De Medicina among medical herbs, described as emollient, erodent, and "powerful to disperse whatever has collected in any part of the body". In one scientific study, the ethanol extract of the bulbs was found effective in one mouse model of nociception, para-benzoquinone induced abdominal constriction, but not in another, the hot plate test.[14]

Daffodils are grown commercially near Brecon in Powys, Wales, to produce galantamine, a drug used to combat Alzheimer's disease.[15]

A field of daffodils in Cornwall, UK

The ancient Greeks believed the narcissus plant originated from the vain youth, Narcissus. He died after becoming so obsessed with his reflection in a pool he could not leave. The Greeks say that the gods turned his remains into the Narcissus flower. This also led to the daffodil's being a symbol of unrequited love.[citation needed]

In ancient China, a legend about a poor but good man holds he was brought many cups of gold and wealth by this flower. Since the flower blooms in early spring, it has also become a symbol of Chinese New Year. Narcissus bulb carving and cultivation is even an art akin to Japanese bonsai. If the Narcissus blooms on Chinese New Years, it is said to bring extra wealth and good fortune throughout the year. Its sweet fragrances are highly revered in Chinese culture.

In classical Persian literature, the narcissus is a symbol of beautiful eyes, together with other flowers that equal a beautiful face with a spring garden, like roses for cheeks and violets for shining dark hair.

The daffodil is the national flower of Wales, where it is traditional to wear a daffodil or a leek on Saint David's Day (March 1).

In some countries the yellow variation is associated with Easter. The German for daffodil is Osterglocke, that is "Easter bell."

William Wordsworth's short poem I Wandered Lonely as a Cloud has become linked in the popular mind with the daffodils that form its main image.[citation needed] 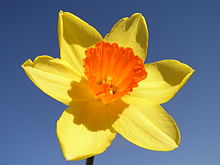 Close-up photo of a daffodil's trumpet

The American Daffodil Society - ADS[21] divides all Narcissus into 13 horticultural divisions, based partly upon flower form and partly upon genetic background. Since the ADS Web site is written for general consumption, the text of the descriptions contained there is relatively broad.[6] Horticulturist Robert F. Gabella of GardenOpus[22] has further clarified herein these definitions by replacement of the words "cup" with "corona", "petals" with "perianth segments", and clarified corona length and corona radius for cases where the corona does not protrude outward. Gabella has further emphasized the prevalence of species phenotype comparable to the genetic lineage of ADS Divisions 5 through 10, and has also called out garden and/or wild origin.[5] 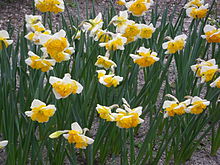 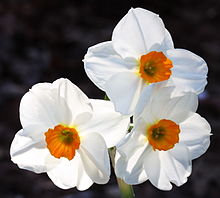 Daffodils may be self-colored—i.e., both perianth and corona identical in color and shade—or the colors between the perianth and corona may differ widely. Some perianths and some coronas also may contain more than one color or shade. Prevalent colors are all shades and tones of yellow, white, orange, pink, red and green. Pinks vary from apricot to rose in shades from pale to deep, and some more recent cultivars have hints of lavender or lilac. Reds vary from orange-red to salmon red to near scarlet. Pink, red, orange and green tones are mainly confined to the corona. However, breeders are currently working against the genera's natural pigmentation and genetic barriers to create cultivars in which pink, rose, red, orange and green tones suffuse or "bleed" from the more highly colored coronas onto the perianth segments of white or yellow. There are an increasing number of commercially available varieties which display this enhanced coloration.

The flower's two regions are assigned color somewhat differently. The perianth colors are assigned from (in the case of multiple colors) the outer edge of the segment inward to the base of the corona. The corona colors are assigned from the base of the corona outward to the rim. Thus, Actaea, a Poeticus (Division 9) Daffodil, is officially classified as 9 W-GYR, while Accent, a Large Cup (Division 2) Daffodil possessing a white perianth and a pink corona, is officially classified as 2 W-P.