Daewoo Motors
This article is about the history of the automotive arm of Daewoo. For its successors, see GM Korea and Tata Daewoo Commercial Vehicle.

The Daewoo Motors was a South Korean car maker established in 1978, part of the Daewoo Group. The company sold most of its assets in 2001 to General Motors after running into financial trouble. The commercial vehicles division was acquired by Tata Motors in 2004.

The company was first established as National Motor in 1937 in Bupyeong-gu, Incheon, South Korea. The name was changed to Saenara Motor in November 1962. Saenara was assembling and selling Datsuns Bluebird P310.[1] Very first automobile company in Korea, Saenara was equipped with modern assembly facilities, and was established after the Automobile Industry Promotion Policy was announced by the South Korean government in 1962.[2] Saenara Motor was then bought by Shinjin Industrial in 1965, which changed its name to Shinjin Motors after establishing collaborations with Toyota.

After Toyota's withdrawal in 1972, Shinjin Motor started a joint venture with General Motors under the name General Motors Korea (GMK), but was renamed again in 1976 to Saehan Motor. GMK shortly sold their Rekord under the GMK marque, together with the Holden Torana based Chevrolet 1700.

After the Daewoo Group gained control in 1982 the name was changed to Daewoo Motor Co.. Until 1996 all cars were based on models from General Motors. All Saehan models were named Daewoos, the Maepsy being refreshed became Maepsy-Na. The Royale Series models were kept, Daewoo addding the Royale XQ and Royale Duke (March 1982), Royale Prince (July 1983) and Royale Salon Super (March 1986). Above the Royale range was added in 1989 the Daewoo Imperial flagship luxury car, which styling was reminiscent of the contemporary Chrysler Imperial and New Yorker, but also luxury Japanese sedans. It was produced until 1993.

The first Daewoo addition was the 1986 Daewoo LeMans, based on the Opel Kadett E ; 3-door versions were called Racer, and 5-door Penta-5. This car had an internation ambition for GM, as it was sold almost worldwide, as the Pontiac LeMans, Asüna GT and SE, or Passport Optima. This car was produced until February 1997, being one of Daewoo Motor's greatest successes. 1986 was also the year Daewoo offered a badge-engineered version of Nissan's Vanette.

In 1990 was created the Espero, designed by Bertone of Italy, initiating a tradition at Daewoo Motor of models created by Italian designers. 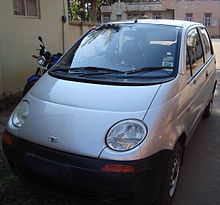 Daewoo Heavy Industries (DHI) introduced in 1991 the Tico mini car, which was sold at Daewoo Motor's dealers. DHI was also selling since 1981 the Damas minivan and Labo mini pickup - Tico, Damas and Labo being based on Suzuki models. When the Royale Series range was discontinued, its models were slightly refreshed and offered under the Prince and Super Salon/Brougham names until respectively 1997 and 1999.

In 1992, the joint-venture with GM ended, leaving Daewoo Motor as an independent company.

In 1994, Daewoo started importing the second generation Honda Legend to replace the discontinued flagship Imperial, under the name of Arcadia. This year, the LeMans got a slight refresh, and all variants (3,4 and 5-door) were then sold under the Cielo name.

The first "real" Daewoo Motor product, the Lanos, was introduced in late 1996; it spawned 3 variants : 4-door, 3-door called Romeo and 5-door Juliet - being the first model of a whole new family of cars to be created. Styling was a cooperation of Giorgetto Giugiaro and Italdesign. One of its main features was the all-new 3-parts corporate grill, reminding of the Daewoo Motor emblem, and which was going to be used on many Daewoo cars to come. February 1997 saw the birth of the Nubira, first Daewoo model to be produced in their then new Kunsan motor plant and designed by Italian I.DE.A Institute. In March 1997, the mid-size Leganza followed, also designed by Giorgetto Giugiaro, borrowing some styling cues of the existing 1990 Jaguar Kensington concept-car.[3] 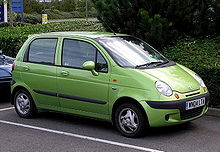 1998 was also the introduction of one of Daewoo Motor's best known car: the Matiz, whose design signed by Giorgetto Giugiaro was based on the 1992 concept car Lucciola, which was initially imagined as a replacement for the Fiat Cinquecento. This car has been Daewoo Motor's best-seller for the next four years. In 1999, Daewoo presented the Magnus, which was a development of the existing Leganza. Sold alongside the Leganza in Korea until the end of the latter's production in 2002, it existed in 2 variants : Classic and Eagle (sportier). The Rezzo minivan was introduced in early 2000. Matiz, Lanos and Nubira got a mid-life facelift in 2001, becoming Matiz II, Lanos II and Nubira II. In 2002, the L6 Magnus was introduced, equipped with Daewoo's first straight-six engine, with new front grill and lamps - and Daewoo also presented the Kalos subcompact to replace the Lanos.

In 1998, after the Asian financial crisis, Daewoo Motor took over the troubled 4WD specialist SsangYong Motor, only to sell it off again in 2000, because the conglomerate ran into deep financial troubles. Its models, were sold under the Daewoo-SsangYong badge in South-Korea (contrary to other areas where they were sold under the Daewoo brand name). SsangYong's flagship limousine, the Chairman was on its part integrated to the Daewoo range, becoming the Daewoo Chairman with a new 3-parts Daewoo corporate grill.

Sale of Daewoo to GM

By 1999, the whole Daewoo Group ran into financial trouble, and was forced to sell its automotive division. Candidates for the operation included Hyundai associated with DaimlerChrysler, Ford Motor Company and the GM-Fiat alliance. Finally, General Motors was the one who bought Daewoo Motor's assets. In 2002 Daewoo Commercial Vehicle Co. Ltd was spun off from parent Daewoo Motor Co. Ltd. In 2004 it was acquired by Tata Motors, India's largest passenger automobile and commercial vehicle manufacturing company

Daewoo owned a share of AvtoZAZ, an automobile manufacturer based in Ukraine, from 1998 to 2003 - establishing AvtoZAZ-Daewoo. The CKD assembly of the Daewoo Lanos started 2002 and lately it was adopted for full-scale production as the ZAZ Lanos. A version of the Daewoo-developed Chevrolet Aveo has been assembled for local market at the Illichivsk subsidiary. Following bankruptcy of Daewoo Motor in 2001, UkrAVTO corporation bought out AvtoZAZ holding in 2002. All of the AvtoZAZ manufacturing facilities (most notably, MeMZ and Illichivsk assembling plant) were reincorporated into ZAZ. The company even adopted a new logo. The Daewoo part in the joint venture was bought out by Swiss venture Hirsch & CIE in 2003.

In August 1992, Daewoo set up UzDaewooAuto, a joint venture and a factory in Asaka city, Andizhan province, Uzbekistan, leveraging the presence of a large local ethnic Korean minority. Currently, the plant assembles the Matiz and the Nexia for both the local market and export, as well as the Lacetti hatchback and sedan for the domestic market only.

In 1994, Daewoo acquired the Automobile Craiova manufacture in Craiova, Romania, which was producing a derivate of the Citroën Axel model, the Oltcit. The society name was changed to Romanian Daewoo Motor, abr. Rodae.[4] The entire production facility was refurbished to mainly produce the Cielo model and later, other models. Until 2008 it was producing the Daewoo Cielo, Matiz and Nubira models for the Romanian market, but also car parts for export, such as engines and gearboxes to GM Daewoo and to other companies. The factory was acquired by the Romanian Government and sold to Ford in 2007 (the official agreement was signed on 21 March 2008). The production of Daewoo models was stopped in May 2008, and Rodae became "Ford Romania".

Daewoo also invested into Poland's Fabryka Samochodów Osobowych (FSO) in 1995, forming a joint venture (Daewoo-FSO) for assembly of the Matiz microcar, a successor to the Tico that was very popular in the Eastern European market. Since January 2005, FSO began to produce Matiz and Lanos under their own trademark.

When making a joint venture with the Polish company Fabryka Samochodów Ciężarowych (FSC) in 1995, Daewoo also created Daewoo Motor Polska which produced the Daewoo Lublin van and Daewoo Honker multi-purpose all-terrain pick-up truck by 1996, design based on the former Tarpan Honker. Daewoo Motor Polska and the British van manufacturer LDV developed together at this time the Maxus van. But after the Daewoo Group's bankruptcy, LDV secured the exclusive rights to the vehicle, purchased the tooling and moved it from Daewoo's plant in Poland to the LDV site in Birmingham. FSC was then sold by GM to the British investment group Intrall and the Honker's design to the Polish company Andoria-Mot.

In 1998, Daewoo Motor bought 50.2% of Avia, a Czech automotive company. The year after, the trade name of the Company was changed to Daewoo-Avia. In the same year, the company became the exclusive importer and distributor of Daewoo vehicles for the Czech Republic, and started manufacturing the Polish Lublin van and the new Daewoo-Avia D60/90 series truck range. GM's buyout plan did not include Daewoo-Avia in 2001. In the year 2005, the company was overtaken by the investment group Odien Capital Partners and in October 2006 the division of light trucks moved under the concern of Ashok Leyland of India, becoming Avia Ashok Leyland Motors Company (AALM).

In 1998, the low-volume assembly of the Lanos, Nubira and the Leganza started in Taganrog, Russia, at the TagAZ-Doninvest factory[5] The cars were sold on the local market under the Doninvest brand, as the Assol, Orion and Kondor, respectively. The project did not have much success, so TagAZ turned to Citroën to produce their Berlingo under the Orion-M name[6] and Hyundai to produce the Accent, and more recently, the Chinese Chery A5 under their new TagAZ Vortex brand.

Following the GM buyout in 2002, GM Daewoo lost interest in its overseas assets; the deals on supplies of pre-assembled CKD kits ended in 2005 and the facilities are likely to rely on its own production capabilities from that point on.