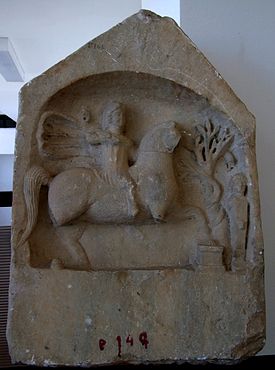 The cult of the "Thracian horseman" spread over much of the Balkans during the Roman period.

Paleo-Balkan mythology includes the religious practices of the Dacians, Thracians, and Illyrians. Little is known about the rituals and mythology of the Iron Age Balkans, but some of their gods are depicted in statuary or described in Greek sources.

One notable cult, attested from Thrace to Moesia and Scythia Minor, is that of the "Thracian horseman", also known as the "Thracian Heros", at Odessos (Varna) attested by a Thracian name as Heros Karabazmos, a god of the underworld usually depicted on funeral statues as a horseman slaying a beast with a spear.[1][2][3]

Detail of the main fresco of the Aleksandrovo kurgan. The figure is identified with Zalmoxis.

A hound attacking a boar, a scene depicted on the lower half of many "Thracian horseman" reliefs.

Kogaionon was the name of a holy mountain of the Dacians.

The mythology of the Illyrians is only known through mention of Illyrian deities on Roman period monuments, some with interpretatio Romana.[10] There appears to be no single most prominent Illyrian god and there would have been much variation between individual Illyrian tribes. The Illyrians did not develop a uniform cosmology on which to center their religious practices.[11]

Some deities are known exclusively from Istria,[12] such as Eia, Malesocus, Boria and Iria. In Liburnia, Anzotica is identified with Venus. Other local theonyms[13] include Latra, Sentona and Ica. Bindus, identified with Neptune, was worshipped among the Japodes.[14] Further north, the hot springs of Topusko[15] were dedicated to Vidasus and Thana, identified with Silvanus[16] and Diana. From the eastern Balkans, the cult of the Thracian horseman spread to Illyria during the early centuries CE. The god Medaurus[17] mentioned in a dedication at Lambaesis in Africa by a Roman senator and native of Risinium appears to be identical to the horseman, being described as riding on horseback and carrying a lance. The Delmatae had Armatus as a god of war.[18]