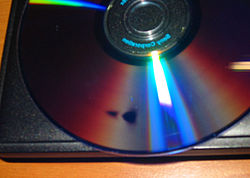 Disc rot is a phrase describing the tendency of CD or DVD or other optical disks to become unreadable due to physical or chemical deterioration. The causes of this effect vary from oxidation of the reflective layer, to physical scuffing and abrasion of disk surfaces or edges, including visible scratches, to other kinds of reactions with contaminants, to ultra-violet light damage and de-bonding of the adhesive used to adhere the layers of the disc together.

In CDs, the reflective layer is immediately beneath a thin protective layer of lacquer, and is also exposed at the edge of the disk. The lacquer protecting the edge of an optical disk can usually be seen without magnification. It is rarely uniformly thick; thickness variations are usually visible. The reflective layer is typically aluminum, which reacts easily with several commonly encountered chemicals such as oxygen, sulphur, and certain ions carried by condensed water. In ordinary use a surface layer of aluminum oxide is formed very quickly when an aluminum surface is exposed to the atmosphere; it serves as passivation for the bulk aluminum with regard to many but not all contaminants. CD reflective layers are so thin that this passivation is less effective. In the case of CD-R and CD-RW media, the materials used in the reflecting layer are more complex than a simple aluminum layer, but also can present problems if contaminated. The thin 10-20 thousandths of an inch layer of protective lacquer is equivalent.

DVDs have a different structure from CDs, using a plastic disc over the reflecting layer. This means that a scratch on either surface of a DVD is not as likely to reach the reflective layer and expose it to environmental contamination and perhaps to cause corrosion, perhaps progressive corrosion. Each type of optical disk thus has different susceptibility to contamination and corrosion of its reflecting layer; furthermore, the writeable and re-writable versions of each optical disk type are somewhat different as well. Finally, disks made with gold as the reflecting layer are considerably less vulnerable to corrosion problems, though no less susceptible to physical damage to that layer. Because they are less expensive, the industry has adopted aluminum reflecting layers as the standard for factory pressed optical disks.

On CDs, the rot becomes visually noticeable in two ways:

In audio CDs, the rot leads to scrambled or skipped audio or even the inability to play a track.

A Philips press officer has declared CD rot to be an isolated problem affecting only an "absolute minority" of cases. PDO has offered to replace any discs affected by CD bronzing if supplied with the defective disk and proof of purchase. However, according to the website of one of the affected record companies, Hyperion, PDO's helpline was discontinued in 2006 after a change of ownership, and defective CDs are now no longer replaced by the manufacturer, even though some of the affected record labels continue to offer replacements.[2] 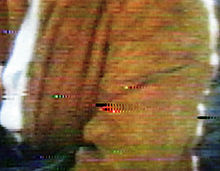 Laser rot on a 1981 MCA Discovision pressing of The Electric Horseman.

Laser rot was a disc rot phenomenon observed by some users of the Laserdisc format in which audio or video quality began to degrade over time. It was generally attributed to oxidation in the aluminum layers by poor quality adhesives used to bond the disc halves together. Single-sided video disks did not appear to suffer from laser rot while double-sided disks did. The name "laser rot" is a misnomer—the disc degradation does not involve the player's laser.

Laser rot was indicated by the appearance of multi-colored speckles appearing in the video output of a laserdisc during playback. The speckles increased in volume and frequency as the disc continued to degrade. Much of the early production run of MCA DiscoVision Discs had severe laser rot. Many DiscoVision titles have ceased to function since their pressings in the late 1970s.