Dumbo, Brooklyn
This article is about the neighborhood in the New York City borough of Brooklyn. For the 1941 animated film, see Dumbo. 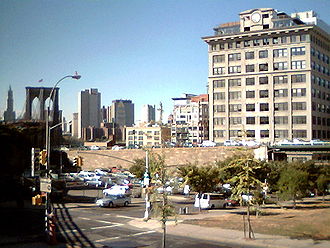 Dumbo view with the Brooklyn Bridge and Manhattan in background

Until the 1890s, the western portion of the neighborhood was known as Fulton Landing, after the ferry stop that connected it to Manhattan before the Brooklyn Bridge opened. Then, it was primarily a manufacturing district, housing warehouses and factories that made machinery, paper boxes and Brillo soap pads. With deindustrialization it began becoming primarily residential, when artists and other young homesteaders seeking relatively large and inexpensive loft apartment spaces for studios and homes began moving there in the late 1970s.[2] The acronym Dumbo arose in 1978, when new residents coined it in the belief such an unattractive name would help deter developers.[2] Near the end of the 20th century, as property became more and more expensive in Manhattan, Dumbo became increasingly gentrified. Joy Glidden is the Founding Director of the Dumbo arts center (DAC) and co-founder of the Dumbo Art Under the Bridge Festival in Brooklyn, New York, where she served as the Executive Director from 1997-2006. Using art as a catalyst for change, Glidden’s efforts achieved successful development in Dumbo that is now a model for similar waterfront developments around the world. 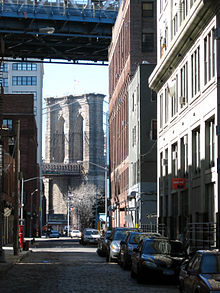 Looking westward from Jay Street along Plymouth Street, through DUMBO, under the Manhattan Bridge, at a pier of the Brooklyn Bridge 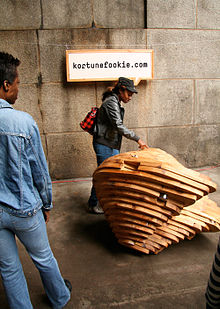 Kortunefookie at Art Under The Bridge in Dumbo

The area has emerged as one of New York City's premier arts districts, with a cluster of for-profit art galleries and such not-for-profit institutions as the St. Ann's Warehouse and the A.I.R. Gallery. Chef Jacques Torres opened a chocolate factory in Dumbo in December 2000.[4] Other culinary businesses in the area include Grimaldi's, the Brooklyn Ice Cream Factory, the River Café, and, in the One Old Fulton Street building, Pete's Downtown Restaurant. All of these businesses cluster in Fulton Landing, which is also home to Bargemusic, a floating venue for classical music. The first public space in the neighborhood was Fulton Ferry, followed by Empire-Fulton Ferry State Park. Brooklyn Bridge Park, a joint state/city venture presently under development, was launched in 2006.

NY Waterway runs a water ferry from the Fulton Slip at Fulton Landing. New York City Subway stations are located at York Street (F train) on the IND Sixth Avenue Line, and High Street – Brooklyn Bridge (A C trains) on the IND Eighth Avenue Line. Bus service is provided by the B25, B67, and B69. A convenient staircase connects the Brooklyn Bridge walkway to Washington Street, one of Dumbo's main streets. The East River Ferry began operations in July 2011, connecting the wharf at Fulton Landing to stops in Governor's Island, Wall Street, Williamsburg, Greenpoint and midtown Manhattan at E. 34th Street. A free bus picks up passengers at E. 34th for more convenient locations in midtown.