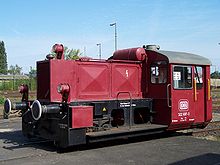 Köf II on a rail flat

German Kleinlokomotiven (literally: small locomotives) like the DRG Kö II (later: Köf II) were developed as locomotives with a low weight and driving power for light shunting duties. There were two classes, based on engine power. The Class II were engines which developed more than 40 (later 50) PS.

After tests with several trial locomotives, they were placed in service from 1932 onwards by the Deutsche Reichsbahn (DRG) and used on small stations for light shunting and marshalling work. They were intended to make the handling of goods traffic more economical. To do that an appropriately-trained controller had to be able to handle shunting duties using the locomotive. Accordingly the locomotive was designed to be robust and easy to operate.

Light locomotives mainly used diesel motors (originally classified as Kö/Köf/Köe by the DRG), as their source of energy, but there were also versions with Benzolmotors, designated as Kb/Kbf/Kbe, and with electrical batteries (accumulator cars: Ks/Ka), as well as one locomotive with a steam engine. The third letter indicated the type of power transmission. If there wasn't one, the locomotive had a gear system. An f stood for an hydraulic drive and an e for electric traction motors, that were fed by a generator. Köf, therefore, stood for a light locomotive (Kleinlok) with diesel (Öl-(Diesel-)Motor) engine and hydraulic transmission (Flüssigkeitsgetriebe).

The locomotive is very small and of standard gauge size, but only fills about half the loading gauge profile. As a result, it can be loaded onto flat wagons. That was necessary, because if it had to move under its own power, its top speed of only 30 km/h would have seriously held up rail traffic. It is driven by a diesel engine, that works through a mechanical gear transmission system and dry clutch. Power is transmitted to the axles using a chain linkage.

The light diesel locomotives were the first German diesel engines that were built in batches by several manufacturers. They were initially divided into two power groups: 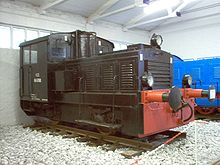 In the DR and DB over 100 new Köf II engines were further developed and built after the war. In the DR over 60 vehicles were produced and referred to as N4 by the manufacturers. These resembled the classical light locomotive very closely, but had a side rod drive. The first real development of the Köf in the GDR was the V15/V23. As in the DB, a decision was made to build a Köf III. This plan was subsequently discarded and replaced by the DR V60 project.

The brake effort of the Kö was initially only the weight of the engine driver and the maximum force he could transmit via the brake pedal. With the introduction of new, more powerful motors (up to 128 PS) and the corresponding increase in tractive effort this proved far too little; as a result many light locos in the DB and DR were equipped with a compressed-air brake, that could also operated the brakes of attached wagons. In the DB the permitted top speed was raised from 30 to 45 km/h where compressed-air brakes had been installed. These locos can be easily recognised by their air reservoirs on the front. Because the open cab gave no real protection from the weather in winter, these were added during the course of main inspections from the late 1950s.

In the 1980s numerous Köf IIs were still in service with the DB and DR (some over 50 years old. For a while, DB 323 412 and 323 415 were the oldest locomotives in the Deutsche Bundesbahn), as well as a handful of battery-operated light locos, of classes 381 and 382. Since 1999 no Köf IIs have worked for the Deutsche Bahn AG. However many remain working for other railway companies and societies, both in regular services and as museum locomotives.

In 1970 the Deutsche Reichsbahn incorporated 378 machines of power category 2 in its EDP classification scheme as Class 100. After German reunification these became Class 310 in the DB AG. Only a few of the DR's light locomotives had hydraulic power transmission; they were grouped into sub-class 100.8. Under the old numbering scheme they were classified as Köf. Dead man's handles (Sifa) and radios for marshalling were not common. The Deutsche Reichsbahn converted many Kö to compressed-air brakes, this programme had not been completed when the Berlin Wall came down.

In 1983/84 three DR Kö II were converted to metre gauge working for the Halle industrial railway and the Harz Narrow Gauge Railway. They have been preserved.