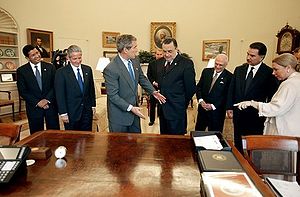 Note: Within this article, "CAFTA" refers to the agreement as it stood before January 2004, and "DR-CAFTA" is used after that.

The Dominican Republic – Central America Free Trade Agreement, commonly called DR-CAFTA, is a free trade agreement (legally a treaty under international law, but not under US law). Originally, the agreement encompassed the United States and the Central American countries of Costa Rica, El Salvador, Guatemala, Honduras, and Nicaragua, and was called CAFTA. In 2004, the Dominican Republic joined the negotiations, and the agreement was renamed DR-CAFTA.

DR-CAFTA together with the North American Free Trade Agreement (NAFTA) and active bilateral free trade agreements, including the Canada-Costa Rica Free Trade Agreement, are seen as bloc agreements instead of a Free Trade Area of the Americas (FTAA) agreement. Panama has completed negotiations with the US for a bilateral free trade agreement (ratification of which is pending), and Belize is a member of the Caribbean Community (CARICOM). Haiti, also a CARICOM member, was expected to be given certain additional trade preferences with the US under the Haitian Hemispheric Opportunity through Partnership Encouragement Act before Congress adjourned during 2006. 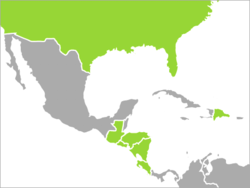 DR-CAFTA has been approved by the Dominican Republic, El Salvador, Costa Rica, Guatemala, Honduras, Nicaragua, and the United States.

The agreement is a treaty under international law, but not under the United States Constitution. In the U.S., laws require majority approval in both houses, while treaties require two-thirds approval in the Senate only. Under U.S. law, DR-CAFTA is a congressional-executive agreement.

The United States Senate approved the DR-CAFTA on June 30, 2005 by a vote of 54–45,[1] and the United States House of Representatives approved the pact on July 27, 2005 by a vote of 217–215, with two representatives not voting.[2] Controversy arose over this vote because it was held open 1 hour and 45 minutes longer than the normal 15 minutes in order to get some members to change their votes.[3] For procedural reasons, the Senate took a second vote on CAFTA on July 28 and the pact garnered an additional vote from Sen. Joe Lieberman—who had been absent on June 30—in favor of the agreement.[4] The implementing legislation became Public Law 109-053 when it was signed by President George W. Bush on August 2, 2005.

The Dominican Republic, Costa Rica, El Salvador, Guatemala, Nicaragua and Honduras have also approved the agreement. They are all the current members of DR-CAFTA.

On March 1, 2006, El Salvador led the way as CAFTA went into effect for that country, following completion of all necessary steps, including delivery of signed Treaty copies to the Organization of American States (OAS), which was the final step. On April 1, 2006, Honduras and Nicaragua joined El Salvador as countries that have fully implemented the agreement. On May 18, 2006, Guatemala's Congress ratified DR-CAFTA and on July 1, 2006, the treaty went into effect for that country. The Dominican Republic implemented the agreement on March 1, 2007. In the referendum on October 7, 2007, the voters of Costa Rica narrowly backed the free trade agreement, with 51.6 percent of "Yes" votes; The necessary implementation laws have been approved and the agreement took effect January 1, 2009.[5]

The goal of the agreement is the creation of a free trade area, similar to the North American Free Trade Agreement (NAFTA) which currently encompasses the US, Canada, and Mexico. DR-CAFTA is also seen as a stepping stone towards the FTAA, another (more ambitious) free trade agreement that would encompass all the South American and Caribbean nations as well as those of North and Central America except Cuba. Canada is negotiating a similar treaty called the Canada Central American Free Trade Agreement.

If passed by the countries involved, tariffs on about 80 percent of US exports to the participating countries will be eliminated immediately and the rest will be phased out over the subsequent decade. As a result, DR-CAFTA does not require substantial reductions in US import duties with respect to the other countries, as the vast majority of goods produced in the participating countries already enter the US duty-free due to the US Government's Caribbean Basin Initiative.

With the addition of the Dominican Republic, the trade group's largest economy, the region covered by DR-CAFTA is the second-largest Latin American export market for US producers, behind only Mexico, buying US$15 billion of goods a year. Two-way trade amounts to about US$32 billion annually.

While not necessarily a part of Plan Puebla Panama, CAFTA is a necessary precursor to the execution of Plan Puebla Panama by the Inter-American Development Bank. The plan includes construction of highways linking Panama City to Mexico City, Texas, and the rest of the US.

DR-CAFTA reduces tariffs, which are a form of tax. However, every nation in CAFTA remains free to set its overall tax level as it sees fit.

US President George W. Bush announced in January 2002 that CAFTA was a priority in his administration, and Congress gave his administration "fast track" authority to negotiate it. Negotiations began in January 2003, and agreement was reached with El Salvador, Guatemala, Honduras, and Nicaragua on December 17, 2003, and with Costa Rica on January 25, 2004. That same month, negotiations began with the Dominican Republic to join CAFTA. 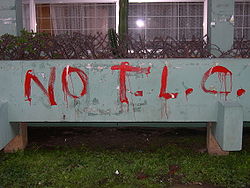 In May 2004 the Salvadoran American National Network, the largest national association of Central American community-based organizations in the U.S., along with other organizations representing Central American immigrants to that country, expressed its opposition to CAFTA, saying, "Our opposition to CAFTA is not ideological. As immigrants, we have a deep understanding of the potential benefits of improved transnational cooperation. We would welcome an agreement that would increase economic opportunity, protect our shared environment, guarantee workers' rights and acknowledge the role of human mobility in deepening the already profound ties between our countries. However, the CAFTA agreement falls far short of that vision."[6]

Since pro-globalization US administration officials have been pushing to pass CAFTA, they faced little opposition to CAFTA among members of their party. Ron Paul opposes CAFTA out of fears of eroding national sovereignty.[8]

Ratification of CAFTA by Nicaragua coincided with the announcement of an end to a political crisis whereby the Nicaraguan Liberal and Sandinista parties ended an impeachment process of President Enrique Bolaños. The previous week, the US had threatened to withhold US$175 million in aid to Nicaragua if Bolaños was impeached.[9]

Prominent among the critics of CAFTA is economist Joseph Stiglitz, who argues that without fairer trade agreements, the benefits from trade will not be realized. He says that NAFTA and CAFTA will increase poverty because they prematurely open markets to US agricultural goods which are subsidized, making local farmers unable to compete with imports, and the nations in question do not have the ability to bear the costs of switching resources with their available capital, nor deal with the consequences of even short-term unemployment. He argues that these agreements have been more geo-political than economic, and that the essential problem with recent bilateral agreements, including CAFTA, is that they are not free-trade agreements.