Far East Movement (stylized Far⋆East Movement or abbreviated FM) is an Asian American electro hop quartet based in Los Angeles. The group formed in 2003 and consists of Kev Nish (Kevin Nishimura), Prohgress (James Roh), J-Splif (Jae Choung), and DJ Virman (Virman Coquia).[1] Far East Movement's first claim to fame was their song "Round Round" featured in the Hollywood movie, The Fast and the Furious: Tokyo Drift, and its subsequent soundtrack, video game and DVD.

Since "Round Round", the group has been featured on various network shows including CSI: Miami, CSI: NY, Entourage, Gossip Girl, and Finishing the Game (a featured film at Sundance 2007).[2] They were invited to perform on Power 106's Powerhouse 2009, one of the biggest hip-hop concerts on the U.S. West Coast, performing with the line-up including Jay-Z, Kid Cudi, Sean Paul, New Boyz, Pitbull, Lil Jon, LMFAO, Ya Boy, Flo Rida, and The Black Eyed Peas. Their single "Like a G6" hit number one on the Billboard Hot 100 Chart and on iTunes as well in late October 2010.[3] Far East Movement also has the distinction of being the first Asian-American group to earn a top ten hit on the Mainstream Pop charts in the United States.[4][5]

The three original members of Far East Movement, Kevin Nishimura (Kev Nish), James Roh (Prohgress), and Jae Choung (J-Splif), grew up in Downtown, Los Angeles. They were close companions in high school and shared a passion for music together. The trio promoted their music online and began performing at local clubs and events in Los Angeles; soon, they began their musical career with the name "Emcees Anonymous" by 2001. However, they later changed it to Far East Movement or FM, originating from a song that they produced with the same name.[6] In 2003, they organized an event called "Movementality" in Koreatown, LA, featuring ten different performances with all the proceeds sent to a local youth drug rehabilitation center. In 2005 Far East Movement released a mixtape called "Audio-Bio" which was one of their first CDs and contained many of their earliest songs and many songs not available anywhere else.Their first album called Folk Music was released in early 2006.[7] The single "Round Round" was featured in the film, The Fast and the Furious: Tokyo Drift, appearing both on the self-titled soundtrack The Fast and the Furious: Tokyo Drift and video game. This critical breakout was the catalyst that cemented their decision to pursue music as a full-time career.[8] Their songs "Get Offa Me" and "Make Ya Self" where featured in The Fast and the Furious video game. They proceeded to perform on two world tours (including USA, South America, Canada, and Asia), and they signed distribution deals in Japan and Korea with Avex Network and JF Productions for their album. Their songs continued to be shown in the media and TV networks including VH1, MTV and E!. In 2007, they were featured in the Sundance Film Festival film called Finishing the Game, making the song "Satisfaction" for the film. They also released the single "You've Got A Friend" featuring Lil Rob and Baby Bash, which became their first song on major national radio.

They were also credited as the producers for Jin's entire fourth album called ABC that was released on February 2007. Immediately prior to their collaboration on ABC, Shanghai-based Jamaican-American producer and promoter Andrew Ballen brought Far East Movement to China with MC Jin for what was to be FM’s first tour date on the Mainland. 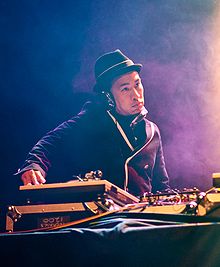 LA's radio station Power 106 DJ, DJ Virman, came to the group as their official DJ. They released another single titled "Lowridin" that received heavy airplay in 2008. Soon after, they planned on showcasing a second album, releasing Animal later on in the same year. Animal featured three hit singles that frequently won national radio play: “You’ve Got A Friend”, “Lowridin”, and the successful “Girls On The Dance Floor.” "Girls on the Dance Floor" reached 27th on the Billboard chart for the Latin Rhythm Airplay, which marked their debut on the Billboard's charts.[9]

There were several collaborations on the Animal Album, including The Stereotypes, Lil Rob, Baby Bash, Bruno Mars, Wiz Khalifa, Bionik, 24/8, IZ, DB Tonik, and Jah Free.[10] Their songs from the Animal album were featured in major film and television on multiple occasions. FM's single "Girls on the Dance Floor" has been played on MTV's America's Best Dance Crew on the Season 4 Finale during a performance with Artistry In Motion, Vogue Evolution and We Are Heroes. It was also featured on Get Him to the Greek, FOX's So You Think You Can Dance and on the 7th episode of CSI: Miami Season 8. In addition, "Dance Like Michael Jackson" was aired on ABC Family's Lincoln Heights on November 10, 2009 and on the Gossip Girl episode, "Dan de Fleurette". "I Party" was highlighted on FOX's TV series Lie To Me and "Fetish" was on Spike TV's Guy's Choice Awards 2009. "Girls on the Dance Floor" has attained over 5 million hits on Myspace while attracting over 8 million views on YouTube.

In 2009, they were one of the prominent acts in L.A.'s Powerhouse 106 concert with well-known artists such as Jay-Z, Kid Cudi, Sean Paul, New Boyz, Pitbull, Lil Jon, LMFAO, Ya Boy, Flo Rida, and The Black Eyed Peas. Popular streetwear company, Orisue, had teamed up with Far East Movement and helped shoot a music video for "Lowridin". In May 2009, Far East Movement joined the well-known hip hop group from Korea, Epik High, on their "Map the Soul" tour throughout the U.S. Then they held their first headlining concert at the Roxy Theater in Hollywood by July 2009, which resulted in a sold-out show. Together with Wong Fu Productions, FM has established another three sold-out "International Secret Agents" concerts titled as "ISA", hosted in San Francisco, L.A., and New York in order to promote Asian American artists in the media with performances by Quest Crew, Poreotics, Jay Park and others.

FM's new mixtape named Party Animal was released on the first date of the Party Rock Tour (featuring FM, LMFAO, Shwayze, Paradiso Girls, Space Cowboy and more). Their two singles, "Girls on the Dance Floor" and "2 is Better w/ Ya Boy", have been garnering successful radio airplay. They later announced that they are working on a new album with Grammy nominated producers, The Stereotypes, who had produced their hit track, "Girls on the Dance Floor". 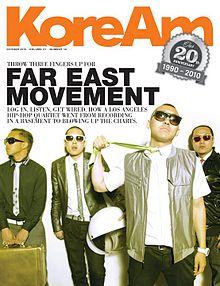 Progressing further along in the same year, the group supported Robyn and Kelis on their double headlining tour along with Dan Black, in addition to being announced as the opening act of Lady Gaga's tour on the Japanese leg of The Monster Ball Tour.[12] Furthermore, their previous hit track, "Girls on the Dancefloor" & "Fetish", was featured in Piranha 3D, yet it was not slotted into the film's soundtrack.

Their 2010 "ISA" shows in LA and New York were held on September 5 and August 28 respectively. They performed their songs alongside acts by AJ Rafael, Jay Park, Wong Fu Productions, Poreotics and Quest Crew (both winners from America's Best Dance Crew), David Choi, Jennifer Chung, David Garibaldi, Lydia Paek, and more. Both of the shows were hosted by Lydia Paek, Kevin Wu and Ryan Higa.

From September 13 until mid-October, the group was one of the opening acts for the Up In The Air Tour with Mike Posner, which spans across various cities in North America.[12]

Free Wired is the title of their first major debut album from Cherrytree/Interscope Records and was released on October 12, 2010. The album was made available in both the U.S. and Canada. Their tracks include popular artists such as Keri Hilson, Lil Jon, Snoop Dogg (their song co-written by Bruno Mars), Mohombi, Colette Carr, Natalia Kills, Koda Kumi, and Ryan Tedder from OneRepublic.[13] Their second single to be released for airplay as a follow up to "Like A G6" is called "Rocketeer", which will exclusively feature Ryan Tedder.[14][15]

In the October 30, 2010 edition of Billboard Magazine, their single featuring The Cataracs and Dev titled "Like a G6" peaked at number one on the Billboard Hot 100 as well as iTunes.[3] While gathering success for both their album and single, they were featured in a series of tour dates with their Cherrytree/Interscope Record label mate, La Roux, from early November to mid-way of the month.[16]

On November 20, it was confirmed that the group had reached the double platinum status for "Like a G6", collecting two million in sales and counting.[17]

The group was awarded Best International Artist in the 2010 M.net Asian Music Awards.[18]

The group toured with Rihanna and Calvin Harris from late February to early March, as part of Rihanna's Last Girl on Earth Tour. [19] Right after the tour ended, the group began headlinging their own tour, The Free Wired World Tour. The group visited Manila, Philippines; Jakarta, Indonesia; Taipei, Taiwan; Hong Kong, Singapore, and Seoul. The tour will continue in Hamburg, Germany later this month and Bangkok in April. The group were due to tour selected venues in the UK early July but have since cancelled these dates due to recording commitments. However, they are still confirmed to perform at the Barclaycard Wireless Festival on July 1 in London.

Far East Movement are set to tour with Lil Wayne on the I Am Still Music tour.[20] On tour, the group took out a second tour bus to work on their second album under the Cherrytree Records label, which is scheduled to release in early 2012.[21]

In 2004/2005, Far East Movement and Jin made a quick Music video for "Food Fight". The video was made during the recording of Jin's song "Senorita" in Jin's trailer and was directed by Todd Angkasuwan. {WATCH}.

The Group has won a Mnet Asian Music Awards for "Best International Artist" in 2010 and they won a MuchMusic Video Award in 2011 for "Like a G6". There nominations include a Billboard Music Award, a Teen Choice Award, and many more.