The British Aerospace 146 (also BAe 146) is a medium-sized commercial airliner formerly manufactured in the United Kingdom by British Aerospace, later part of BAE Systems. Production ran from 1983 until 2002. Manufacture of an improved version known as the Avro RJ began in 1992. A further-improved version with new engines, the Avro RJX, was announced in 1997, but only two prototypes and one production aircraft were built before production ceased in late 2001. With 387 aircraft produced, the Avro RJ/BAe 146 is the most successful British civil jet programme.[1][2]

The BAe 146/Avro RJ is a high-wing cantilever monoplane with a T-tail. It has four turbofan engines mounted on pylons underneath the wings, and has retractable tricycle landing gear. The aircraft has very quiet operation, and has been marketed under the name Whisperjet. It sees wide usage at small city-based airports. In its primary role it serves as a regional jet, short-haul airliner or regional airliner. The BAe 146/Avro RJ is in wide use among European airlines, such as Brussels Airlines, CityJet, Swiss International Air Lines and Lufthansa. The freight-carrying version has the designation "QT" (Quiet Trader), while a convertible version is designated "QC".

Hawker Siddeley carried out the original design in 1973 using the designation HS.146, but soon abandoned the project as a result of the world economic downturn resulting from the 1973 oil crisis. Low-key development proceeded, however, and in 1978 British Aerospace, Hawker Siddeley's corporate successor, re-launched the project. The 146 type number comes from the original de Havilland designation sequence, which was continued by Hawker Siddeley when the former became a subsidiary of the latter. The type name "Avro RJ" superseded "BAe 146" in 1993.

The early aircraft were built at what was originally a de Havilland factory at Hatfield. The Avro RJ family of aircraft was assembled at the BAE Systems Regional Aircraft Centre at the Avro Airfield at Woodford in Greater Manchester, England. Production of various sections of the aircraft was carried out at different BAE plants. The rear fuselage section was manufactured at BAE Systems' former Avro site at Chadderton, near Oldham, Greater Manchester. The center fuselage section was manufactured at the Filton BAE site. The fin came from Brough and the engine pylons were made at Prestwick.[4] The nose section was manufactured at Hatfield, where the assembly line for the early aircraft was located. Some manufacturing was subcontracted outside the UK. The wings were made by Textron in the USA and the tailplane and control surfaces were made by Saab-Scania in Sweden.[5] The original Lycoming ALF 502 geared turbofan engines were replaced by the higher thrust, derivative Honeywell LF 507 geared turbofan engines with the development of the Avro RJ series, which were housed in redesigned nacelles. The Avro RJ series also had a slightly modernised cockpit.[6] Production of this aircraft has ended, with the final four aircraft being delivered in October–November 2003. 166 Avro RJ aircraft were delivered between 1993 and 2002. 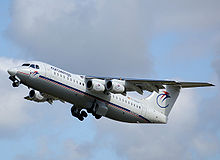 The aircraft have proven to be useful on "high density" regional and short-haul routes. In economy class, the aircraft can either be configured in a standard five-abreast layout or a high-density 6-abreast layout, making it one of very few regional jets that can use a 6-abreast layout in economy class. The plane is also renowned for its relatively quiet operation, a positive feature which won the hearts of many operators who wanted to fly in and out of noise stringent airports within cities. The aircraft is one of only a few types that can be used on flights to London City Airport, which has a unique steep approach and a short runway.[6]

The ALF 502 turbofans suffered from some reliability problems. The internal electronics were prone to overheating, which could trigger an automatic shutdown of an engine with no option of in-flight restarting, and certain rare atmospheric conditions caused loss of engine thrust due to internal icing.[7]

The BAe 146 experienced aerotoxic syndrome due to leakage of tricresyl phosphate (TCP) into the plane's bleed air. This has been blamed on problems with leaking engine seals.[8] Neurotoxic fumes have been known to incapacitate pilots. 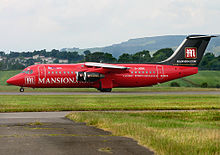 First flight of the -100 occurred on 3 September 1981, with deliveries commencing in 1983.[9] The launch customer in March 1983 was Dan-Air, soon followed by the RAF's Royal Flight. The -100 was the last of the 146 series designs to be developed into the Avro RJ standard with first deliveries of the Avro RJ70 in late 1993. The RJ70 differed from the 146-100 in having FADEC LF 507 engines and digital avionics. The RJ70 seats 70 passengers five abreast, 82 six abreast or 94 in high-density configuration. The 146 is the first jet aircraft operated by the British Queen's Flight (later 32 (The Royal) Squadron), and entered service in 1986 after two aircraft were leased by the Royal Air Force for evaluation. The Queen's Flight acquired a total of three 146s, all fitted out with a luxurious bespoke interior. A complete spare interior was also ordered and held in storage at RAF Stafford. The aircraft are operated in a VIP configuration with a capacity of 19 passengers and 6 crew. The BAe 146-100QC is the convertible passenger/freight version and the BAe 146-100QT (Quiet Trader) is the freighter version.

Designers' initial proposals for the -300, the final development of the 146 product line, included a 3.2 m extension to the fuselage of the -200, more powerful engines and winglets. However due to the requirements of airlines for higher efficiency rather than capacity the production 146-300 emerged as a 2.44 m stretch of the -200, without winglets or the proposed ALF 502R-7. Deliveries began in December 1988. The Avro version of the 146-300, the second such development of the 146 product line, became the RJ100. It shared the fuselage of the 146 version, but with interior, engine and avionics improvements. The most common configuration in the RJ100 seats 100 passengers. The RJ115 seats 116 as standard or up to a maximum of 128 in a high-density layout. A modified version 146-301 is used as a Facility for Airborne Atmospheric Measurements (FAAM). The BAe 146-300QC is the convertible passenger/freight version and the BAe 146-300QT (Quiet Trader) is the freighter version. 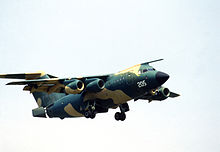 Throughout the production life of the BAe 146, British Aerospace proposed a number of specialist military versions, including side and rear loading transports, an airborne tanker version,[10] and a carrier onboard delivery version.[11]

Of these proposals, only one, the BAe 146STA (Sideloading Tactical Airlifter), based on the BAe 146QT cargo aircraft, and with the same cargo door on the left side of the rear fuselage was built. The military transport version has a refuelling probe protruding from the nose. A demonstrator, fitted with a dummy refuelling probe and an air-openable paratroop door was displayed at the 1989 Paris Air Show and carried out extensive demonstration tours, but no orders resulted.[12]

In 2009, BAE Systems announced the BAe 146M programme. This aims to sell ex-civilian BAe 146-200 and -300 aircraft to military air arms in either passenger or freighter configuration.[13]

The RJX-70, RJX-85 and RJX-100 aircraft represented advanced variants of the Avro RJ Series. The RJX series used Honeywell AS977[citation needed] turbofans for greater efficiency (15% less fuel-burn, 17% increased range), quieter performance and 20% lower maintenance costs. Drukair of Bhutan placed orders for two RJX-85s, while British European placed firm orders for 12 RJX-100s and 8 options.[14][dead link] However, BAE Systems terminated the project in December 2001, having completed and flown only three aircraft - a prototype each of the RJX-85 and RJX-100, and a production RJX-100 for British European. BAE reached an agreement with Druk Air and British European in early 2002 in which the airlines agreed not to enforce their firm orders for the RJX. BAE explored the possibility of manufacturing 14 "hybrid" aircraft, however British European at least was unwilling to accept the risk of operating a unique type.[15]

The termination of the RJX project marked the end of complete commercial airliner production in the United Kingdom, though various components for Airbus aircraft continue to be produced there. 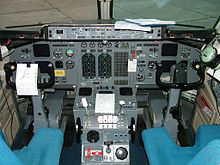 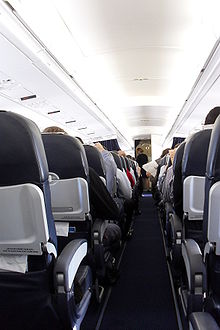 Cabin of a CityJet Avro RJ85

Some 17 other airlines also operate smaller numbers of the type.[20]

As of August 2006, a total of 152 Avro RJ aircraft (all variants) also remain in airline service. Major operators include:

Some 12 other airlines also operate smaller numbers of the type.[20]