The British Columbia Regiment (Duke of Connaught's Own)

The British Columbia Regiment (Duke of Connaught's Own)

The British Columbia Regiment (Duke of Connaught's Own) is a Primary Reserve armoured reconnaissance (recce) regiment of the Canadian Forces; the regiment is subordinate to 39 Canadian Brigade Group of Land Force Western Area. Established in 1883, it is the oldest military unit in Vancouver, British Columbia. It parades at the Beatty Street Drill Hall at the corner of Dunsmuir and Beatty in Downtown Vancouver. The regiment has been variously designated as garrison artillery, rifles, infantry, and armoured, but has been reconnaissance since 1965. It has received forty battle honours in its history, and has been a formation of the Royal Canadian Armoured Corps since 1942.

On 1 June 1866, the Seymour Artillery Company was formed at New Westminster, British Columbia in preparation for Fenian raids. Irish nationalists had landed in San Francisco and were attempting to sail north to launch an attack on the British Empire. Many of the recruits had been members of the Royal Engineers detachment that established New Westminster as the capital of the new colony and built roads and surveyed the area under Captain Richard Moody. That detachment was disbanded in 1863, but most chose to stay and settle in the area, and subsequently enlisted when the call was made. The Fenian raid on BC never happened, but the nucleus of the British Columbia Regiment was in place.[1] 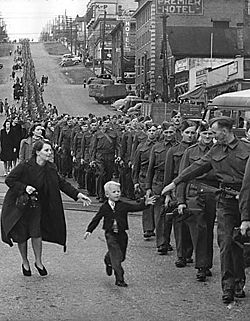 The British Columbia Regiment (Duke of Connaught's Own), marching in New Westminster, 1940. As a rifle regiment, weapons are carried "at the trail" rather than at the slope. "Wait for me, Daddy" is one of the most famous and reprinted Canadian WW2 Photos. The father survived the war.

The regiment was called out at 4:15 a.m. on August 26, 1939, two weeks prior to the official declaration of war by the Canadian governor general. Soldiers were dispatched to various vulnerable areas in the city, largely as a precautionary measure in response to Adolf Hitler's increasing aggression towards Poland.[2] The British Columbia Regiment trained in Canada until January 1942, when it was announced that the 4th Division would become an armoured division. As a result, the unit was re-designated as the 28th Armoured Regiment (The British Columbia Regiment), and its officers and men were sent to England for training. In August 1943, Lieutenant-Colonel D.G. Worthington became the commanding officer of the regiment. In October, the regiment began to receive the M4 Sherman tanks, gradually replacing the Canadian-made Ram tanks, which had been in use for training.

Following the Allied invasion of Europe on D-Day, the regiment landed in France on July 23.[2] The regiment saw its first action in the Second World War during Operation Totalize, on August 8, 1944. The operation was launched under the cover of darkness. To aid in navigation at night, searchlights had been pointed at the cloud cover to provide some illumination. 40 mm Bofors guns were also firing tracers along the line of advance to aid the attack. Despite these precations, the 28th, accompanied by The Algonquin Regiment, became disoriented and navigated away from Hill 195, which was its objective, and steered instead towards Hill 140, but did not reach the hill before daybreak. As a result, when daylight came, the unit was located in an exposed valley with units of the 12th SS Panzer Division concealed in the high ground. The two Canadian regiments were attacked by the 12th SS, who were equipped with 88 mm flak guns and Tiger tanks, among other heavy weapons. Lieutenant-Colonel Worthington was killed during the battle, and the survivors of the regiment managed to break contact with the 12th SS, after suffering 133 casualties and losing 48 out of 52 tanks. The 28th would return to action only a week later, contributing to the closing of the Falaise Pocket during Operation Tractable, which saw the destruction of the German Seventh Army and the capture of a great number of enemy soldiers and equipment.

After the closing of the Falaise Pocket, the regiment participated in the pursuit of retreating German forces into Belgium, as part of the 1st Canadian Army. A main objective of the Allied armies in Europe was the capture of major ports in order to ease the considerable logistical burden caused by the stretched supply lines, some of which extended hundreds of miles back to the invasion beaches in Normandy. The capture of a major port facility would allow the Allied armies to regain their momentum for the push into Germany. The port of Antwerp was selected as the target of the 21st Army Group for this reason. In October, as part of the Battle of the Scheldt, the regiment, as part of the 1st Canadian Army, took part in the essential task of clearing out the Scheldt Estuary to make the approach to the port of Antwerp safe for operation. On November 4, units from the Lake Superior Regiment (LSR) entered the village of St. Phillipsland and were informed by the civilian population that there were four small Kriegsmarine vessels docked at the harbour. The following day, a troop of tanks from C Squadron, together with units from the LSR opened fire while the vessels were docked and unable to escape. The vessels were attacked by the guns from the C Squadron tanks as well as 6-pounder antitank guns and mortars from the LSR. Three vessels were sunk and a fourth was severely damaged. Captain R. Styffe from the LSR later removed the log from one of the vessels and wrote as a final entry: "Gesunken by Lake Superior Regiment and British Columbia Regiment – Canadian Army." A member of the British Columbia Regiment recovered the ship's bell from one of the sunken vessels, and it now resides in the Officer's Mess at the Beatty St. Armoury.[3] (Records have not been kept as to the type of vessels sunk in Zijpe Harbour, although it is probable that the four vessels were E-boats. The plaque on the bell in the Officer's Mess describes the vessel as an "escort".)

The regiment finished the war in Germany, after crossing the Rhine in April 1945. The regiment captured the town of Neuenhaus and administered it for a brief period. The final action of the war involved crossing the Kusten Canal on April 17, 1945. At the close of the war, the regiment had lost 108 officers and men killed, and 213 wounded. 105 Sherman tanks, 14 Stuart tanks, and one Crusader tank had been lost during the course of the war. These losses were the highest suffered by any regiment in the 4th or 5th Armoured Divisions. 14 new battle honours were added to the regiment's guidon as a result of its service during the Second World War. On February 1, 1946, the British Columbia Regiment returned to Vancouver, marching to the Beatty St. Armoury under the command of Lieutenant-Colonel J.W. Toogood.[4] 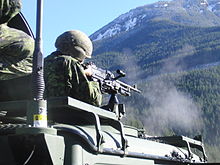 A soldier from the British Columbia Regiment (DCO) firing the C6 General Purpose Machine Gun mounted on a G-Wagon.

In April 1946, Duke of Connaught's Own Rifles and the 28th Armoured amalgamated into the 13th Armoured Regiment (The British Columbia Regiment), RCAC. Later, in 1949 the name was again changed, to The British Columbia Regiment (Duke of Connaught's Own) (13th Armoured Regiment). The regiment continued to train on the M4A2E8 Sherman tank, winning the Wallace Trophy for most efficient Militia unit in 1954, 1955 and 1956. Although the unit did not deploy to Korea as part of the Korean War, it did contribute volunteers to augment Lord Strathcona's Horse (Royal Canadians) and the Royal Canadian Dragoons, whose regiments were sent. Soldiers of the regiment also served in deployments to Germany during the Cold War.

On May 19, 1958, the regiment was redesignated again, becoming The British Columbia Regiment (Duke of Connaught's Own) (RCAC); the regiment's title dropped "(RCAC)" in 1985, but it remains part of the corps.[5] On February 28, 1965, the regiment's role changed, and it became an armoured reconnaissance unit. The long-serving Sherman tanks were retired, and the unit converted to the M38A1 CDN Jeep. The Lynx reconnaissance vehicle entered service in the Canadian Army in 1968, to replace the Ferret armoured car currently serving in the reconnaissance role. The regiment cross-trained its soldiers to use the Lynx so that they could supplement regular army units overseas if necessary. In the 1987, the regiment received the Bombardier Iltis Jeep to replace the CJ7, itself a stopgap replacement for the aging M38A1, and the unit continued to train in the light reconnaissance role.

The Canadian Army began to change the Reserve concept in the late 1990s, into the year 2000. Reservists would now be trained to the equivalent levels of their Regular force counterparts to ensure that a reserve augmentee could better serve in a given role. Under this concept, the regiment continues to train its soldiers to support and augment regular force units whenever required, in addition to being ready to serve locally whenever required. Soldiers of the regiment have served overseas in Canadian UN missions, especially the former Yugoslavia. The regiment continues to contribute soldiers to the NATO mission in Afghanistan, usually attached to Lord Strathcona's Horse or the Royal Canadian Dragoons, operating the Leopard C2, Leopard 2A6 or Coyote Reconnaissance Vehicle. In 2004, the regiment retired its Iltis Jeeps, receiving the Mercedes-Benz G-Wagon Light Utility Vehicle, Wheeled, in the C&R (command and reconnaissance) version. The G-Wagons are built to accept a lightweight applique armour kit, and are usually armed with either the C9A1 or C6 light machine gun in a manually-operated turret. 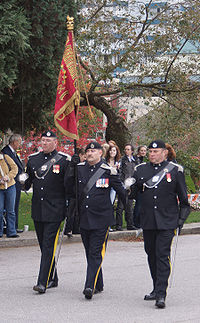 Sergeants of the British Columbia Regiment (Duke of Connaught's Own) carry in the unit's guidon during the unit's 125th anniversary parade and Freedom of the City reaffirmation at Vancouver City Hall, October 11, 2008.