In 1999 the locomotive was heavily renovated for a private company, and does not now have the gas turbine.

Post the merger of the Deutsche Bundesbahn and Deutsche Reichsbahn another locomotive - the DR Class 119 has been assigned to the DB class 219.

From 1963 onwards the DB Class V 160 had been delivered and deployed in large numbers, and was proving successful. Thus plans were made for testing of further units were made - specifically a variant with electric train heating. These units would require more power than the engines installed in th V 160 could deliver. Three prototype units of the DB Class V 162 (later Class 217) were ordered; with the addition of a smaller supplementary diesel engine, providing via a generator the electricity for electric train supply. (see Head end power)

Another variant was the V 169, this locomotive utilised a supplementary gas turbine to improve overall performance. A General Electric LM 100-PA 104 turbine was chose, using diesel as a fuel rather than kerosene. The locomotive turbine was built under license by Kloeckner-Humboldt-Deutz (KHD) at the Oberursel plant. (see Motorenfabrik Oberursel (now part of Rolls-Royce)

KHD also received the order for manufacture of the locomotive itself, this was done at the KHD-Werk in Cologne and the locomotive delivered on the 4 June 1965 as V 169 001, it then was exhibited to the public at the International Transport Exhibition in Munich. The electric train heating was not yet ready, and so the locomotive did not enter service until January 1966.

From March 1966 the locomotive went onto the Allgaeu Munich to Lindau line for testing, being stationed at Kempten.

In the V 169, the electrical generator for the heating was powered by a shaft from the gearbox of the hydraulic tranmission system. This method proved successful and was later used in the DB Class 210 and DB Class 218 locomotives. The fundamental usefulness of the additional gas turbine propulsion was also demonstrated and led to the introduction of the DB Class 210 (with a more powerful turbine: an AVCO Lycoming T53-L 13).

The delivery of the Class 210s being to Kempten in 1971 for work in the Allgaeu region meant that the less powerful V 219 001 was oudated. Thus, when the gas turbine failed with damage to the combustion chamber in 1974, the locomotive was converted for other uses. The diesel engine was throttled back to 1,400 kW (1,900 hp), and the heating system was also shut down.

With these modifications, the locomotive was no longer suitable for passenger work, and began work as a freight locomotive around Gelsenkirchen often working across the Dutch border, up to 25 November 1977. In 1978, the locomotive was decommissioned and then left in the open in Bremen up to 1985.

In 1985 the locommotive was sold to company of Elizabeth Layritz GmbH in Penzberg, a firm specialising in the modernisation of scrapped locomotives. Subsequently locomotive was sold to Impresa Attilio Rossi in Italy and worked between Rome and Naples (as T1591) up till 1998/9. 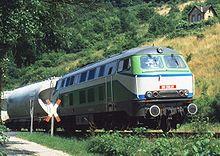 Numbered as DH 280.01 on Lime train between Stromberg and Schweppenhausen

After the German railway reform of 1994 cheap second-hand locomotives with authorization for work in Germany were in demand. So in 1999 the locomotive was bought (back to Germany) by leasing firm firm RailImpex and sent to Gmeinder for refurbishment and remotorising,[3].

The refurbishment included the replacement of the original Maybach engine with a Caterpillar diesel engine, a review of its condition and the installation of new wiring.

The railway company Waldhof AG ('Bahngesellschaft Waldhof AG or 'BGW') (Now called Rhenus Rail Logistics GmbH) in Mannheim bought the locomotive for freight work and designated it as DH 280 01. It was painted in the green-gray color scheme of the BGW.

Under EVB ownership, renumbered 420 01 and with a new livery

In the summer of 2000 the loco was used for garbage trains from Krefeld to Hildesheim until September when a collision meant the machine must return to Gmeinder for repair. By February 2001 it was back in operation. After that, among other workings it pulled Lime trains for BASF from Ludwigshafen to Stromberg.

In October 2001 the unit was transferred to Eisenbahnen und Verkehrsbetriebe Elbe-Weser GmbH and worked on container trains between Hamburg, Bremerhaven and Bremen. The EVB designation is 420 01[4]